These People Want to Convince Everyone That Looting Is A-Okay 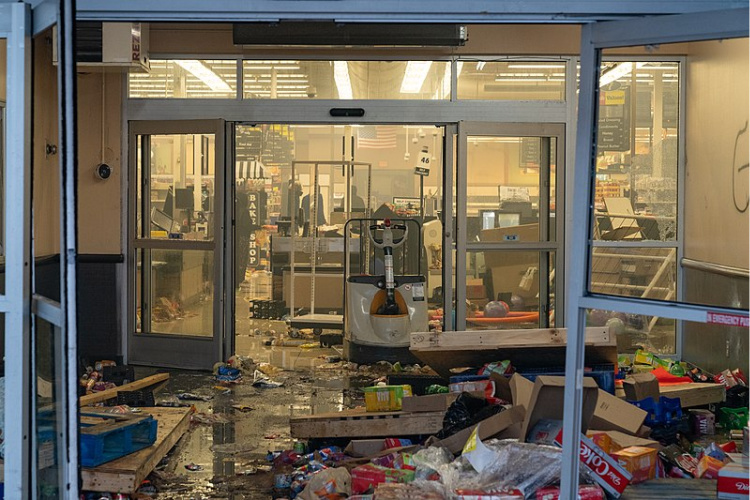 As an American, most of us strongly support the concept of peaceful protests. However, when things turn violent, when property gets destroyed, when buildings and cars are set on fire, and when businesses are looted, rational people can agree that this is wrong.

Unfortunately, a whole bunch of irrational people are being given microphones and they’re trying to tell us all why looting is not just okay, but actually awesome.

Looting is okay because it’s “reparations”

First, there was the woman who spoke after the Magnificent Mile in Chicago was looted so ferociously that Mayor Lori Lightfoot pulled the drawbridge open to keep people out of the downtown area. I recently wrote:

According to a Black Lives Matter activist and organizer, Ariel Atkins, it was just “reparations.” Atkins believes that anything the looters wish to damage or steal is owed to them. She made the radical statement at a solidarity rally in front of a Chicago police station, where people were gathered to support those who had been arrested.

“That’s a reparation,” Atkins said. “Anything they want to take, take it because these businesses have insurance.” (source)

At a time when more people than ever in the United States were willing to get on board and protest police brutality and racial violence, entitled statements like the one made by Atkins have served to return us to a place of absolute division. (source)

Atkin’s statement was made at a solidarity rally in front of a Chicago police station where people were gathered to support those who had been arrested for pillaging the Windy City.

Looting is okay if they “need” the item.

According to a document obtained by Red State News, Diana Becton, the district attorney of Contra Costa County, California, has changed up how looters are charged during a state of emergency.

In order to promote consistent and equitable filing practices the follow[ing] analysis is to be applied when giving consideration to filing of PC 463 (Looting):

a. Factors to consider in making this determination:

i. Was the target business open or closed to the public during the state of emergency?
ii. What was the manner and means by which the suspect gained entry to the business?
iii. What was the nature/quantity/value of the goods targeted?
iv. Was the theft committed for financial gain or personal need?
v. Is there an articulable reason why another statute wouldn’t adequately address the particular incident? (source)

Oh. Well. If you need those shoes and purses, then it’s totally different.

And yes, before the barrage of comments, I know that Red State News is biased. So is CNN. So is the New York Post. They’re all biased. If I could only use unbiased sources, I’d have maybe 3 articles on current events on this website. If you want to hear directly from District Attorney Becton, you can check out her opinion piece on Politico right here.

Rioting and looting are okay because they’re “joyous and liberatory”

Vicky Osterweil is the author of the book, In Defense of Looting. I’m sure it’s a super nice book despite that misleading picture of a crowbar on the cover. 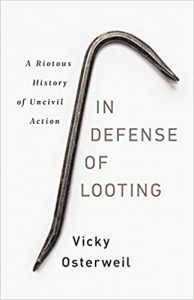 Osterweil landed an interview with NPR to tout her opus and first provided a definition.

When I use the word looting, I mean the mass expropriation of property, mass shoplifting during a moment of upheaval or riot. That’s the thing I’m defending. I’m not defending any situation in which property is stolen by force. It’s not a home invasion, either. It’s about a certain kind of action that’s taken during protests and riots…

…It tends to be an attack on a business, a commercial space, maybe a government building—taking those things that would otherwise be commodified and controlled and sharing them for free. (source)

Then she continued to laud looting, almost poetically explaining the “number of important things” that looting does. (Emphasis mine)

It gets people what they need for free immediately, which means that they are capable of living and reproducing their lives without having to rely on jobs or a wage—which, during COVID times, is widely unreliable or, particularly in these communities is often not available, or it comes at great risk. That’s looting’s most basic tactical power as a political mode of action.

It also attacks the very way in which food and things are distributed. It attacks the idea of property, and it attacks the idea that in order for someone to have a roof over their head or have a meal ticket, they have to work for a boss, in order to buy things that people just like them somewhere else in the world had to make under the same conditions. It points to the way in which that’s unjust. And the reason that the world is organized that way, obviously, is for the profit of the people who own the stores and the factories. So you get to the heart of that property relation, and demonstrate that without police and without state oppression, we can have things for free…

…Looting strikes at the heart of property, of whiteness and of the police. It gets to the very root of the way those three things are interconnected. And also it provides people with an imaginative sense of freedom and pleasure and helps them imagine a world that could be. And I think that’s a part of it that doesn’t really get talked about—that riots and looting are experienced as sort of joyous and liberatory. (source)

And also, if you’re worried about violence, don’t be as long as you don’t “feel” violent. (Emphasis NPR’s)

Ultimately, what nonviolence ends up meaning is that the activist doesn’t do anything that makes them feel violent. And I think getting free is messier than that. We have to be willing to do things that scare us and that we wouldn’t do in normal, “peaceful” times, because we need to get free. (source)

I suspect if you are aggressively defending your hard-earned property against looters, folks like Vicky Osterweil won’t give two hoots whether you felt violent or not.

Incidentally, Osterweil herself is white. Here’s her bio and photo. 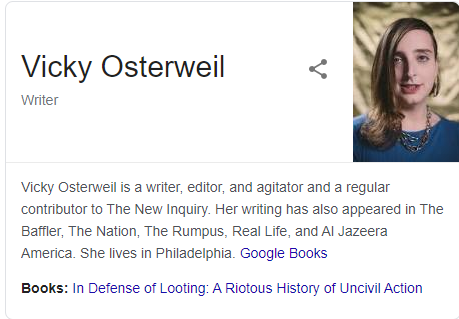 Not everyone was impressed with NPR’s publicity for the author.

This glorification of looting and property damage is absolutely despicable and shameful, @NPR. https://t.co/Sv2MeMAzq3

As long as looting is praised it will increase.

If looting continues to be considered acceptable, okay, or even awesome, it’s not just going to continue – it’s going to increase. Our country’s economy has already been devasted by COVID and the subsequent shutdowns. Imagine being a small business owner who just managed to reopen your shop or restaurant, only to have your windows smashed in, your property stolen, and your fixtures destroyed by an entitled mob. While it’s great that riot damage is often covered by insurance, who’s going to cover your massively increased premiums when your policy renews? If you aren’t driven out of business now, you might be when that bill comes in.

Not only are businesses being forced to board up their windows and close, they’re going to have difficulty doing business in the longterm due to these looters.

Looting is NOT okay under these kinds of circumstances. As preppers, we talk sometimes about looting and scavenging. But that is something which would take place when no further business is likely to occur due to a systemic breakdown. This is something entirely different.

Because that’s exactly what’s going to happen. Hardworking business owners are not going to stand by and simply watch as everything they’ve worked for is destroyed. At some point, they’re going to fight back because if the country is lawless, they’ll have to take the matter into their own hands.

There are already battle zones across the country and more getting added daily. Armed conflict is already occurring. These celebrations of looting will only fuel the flames.