Everything You Need to Know About E. Coli 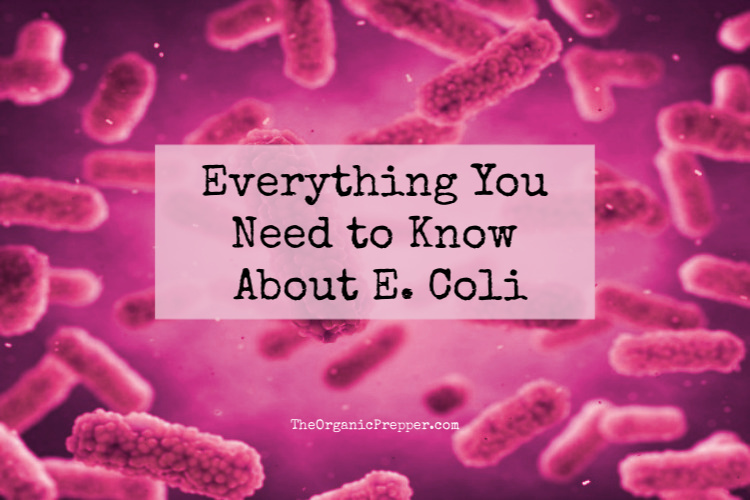 According to Food Safety.gov, two of the most common foodborne illnesses are Listeria and E.coli. Dagny Taggart has already written an especially informative article on listeria and a listeria outbreak in the spring of this year that I would caution everyone to read carefully. This dangerous bacterium is fatal in up to 30% of cases and a listeria infection is not easily preventable.

E.coli, however, baffles my mind.

E. coli bacteria can be found just about everywhere.

Escherichia coli bacteria was first discovered in 1885 in the human colon by a German doctor named Theodor Escherich using infant fecal samples. It was initially called Bacterium coli, but the name was later changed to honor its discoverer. Most of us are very aware of Escherichia coli, or E. coli for short, and while it’s true that most are harmless, there are several that aren’t, and they’ve been the content of many news reports and have caused many scares. From fruits and vegetables to meats, these bacteria have run the gamut and don’t seem to be losing steam anytime soon. E. coli are bacteria that are found in the intestines of animals, the environment, and in food, and can cause a myriad of infections in the human body.

An article on Medscape written by Tarun Madappa, MD, MPH, states E.coli is one of the most frequent causes of many bacterial infections, including urinary tract infections, gallbladder complications (cholecystitis), pneumonia, septic arthritis, brain abscesses, infection in the bones, cellulitis, sepsis (bacteremia), inflammation of the bile duct system, meningitis in infants, and more.

Some E. coli strains are more dangerous than others.

Shiga Toxin-producing E.coli (STEC) is the one most commonly heard about in the news in regards to foodborne outbreaks. It comes from the guts of animals and usually affects us through cattle – from ingesting contaminated beef, drinking water contaminated by runoff from stockyards, eating vegetables contaminated by runoff, and being in contact with the animal and/or its environment, or other people who are infected via the oral/fecal route.

Enterotoxigenic E. coli is the version most commonly noted as causing “Travelers Diarrhea”, and is transmitted by food or water contaminated with, you guessed it, animal or human feces. To date, however, the most worrisome and worst type of E. coli is Escherichia Coli 0157: H7.

What does all that technical stuff mean? It means E. coli is dangerous.

Not only are undercooked meat and insufficiently pasteurized dairy products, as well as apple juice, an issue, but so are unwashed fruits and vegetables…as is the forgetful person who cooks up your favorite dinner at your favorite restaurant without washing his/her hands. Unfortunately, the days of swimming or playing in possibly contaminated water like ponds, streams, or lakes, may be gone, as these pose a significant risk as well.

It is important to know how to recognize the symptoms of E. coli infection.

The symptoms of most any E. coli infection are similar to each other and can start as late as two weeks after exposure, and can last two weeks more. Most recover within 10 days. Those symptoms include:

E. coli 0157: H7, however, includes bloody diarrhea 90% of the time along with more severe dehydration, which can then further increase in severity of symptoms with tachycardia, slow capillary refill, and delirium – particularly in children.

Here’s how E. coli infections are diagnosed and treated.

An important thing to know regarding this type of E. coli is that despite the recommendation by the CDC that all diarrheal samples that are submitted for a culture also undergo screening for E. coli O157:H7, many labs do not routinely screen for this organism, meaning you should insist your doctor request testing for E. coli 0157:H7 if the bacterium is suspected.

The treatment for all cases of E. coli, just like any other type of gastroenteritis, is based on supportive care and maintaining hydration. While medicines like Phenergan/promethazine HCL might possibly help with nausea, neither diarrhea medication (like Imodium) or antibiotics are used, and in fact, might significantly worsen the infection. While doing my research, I did come upon several articles that inferred probiotics would be effective. One such article can be read here.

Alright then, how do we kill E. coli?

On our bodies, again, good old-fashioned soap and water works. On surfaces like kitchen counters, bathrooms, etc., bleach seems to do the trick. Clorox and Lysol wipes both claim to kill E. coli, but I don’t risk it. How about in our food? Does rinsing with water kill it? No. Does freezing kill it? No. But temperatures of 160°F and above do. There are some controversial reports that vinegar, specifically apple cider vinegar, can kill E. coli on fruits and/or veggies but this has yet to be proven.

In a disaster, post-apocalyptic, SHTF world, our best bet is to stay as clean as possible and cook everything we can – including freeze-dried foods – to 160°F. Remember that freezing doesn’t kill E. coli, and it doesn’t require oxygen to live. That means foods dehydrated at a temperature below 160°F, if not cooked well before eating, can pose a risk as well.

Are you concerned about the rise in foodborne illnesses including those caused by E. coli? Are there things you do to avoid contamination in your home? Please share your thoughts in the comments.