In Defense of California: Stop Wishing We’d Fall into the Ocean and Die 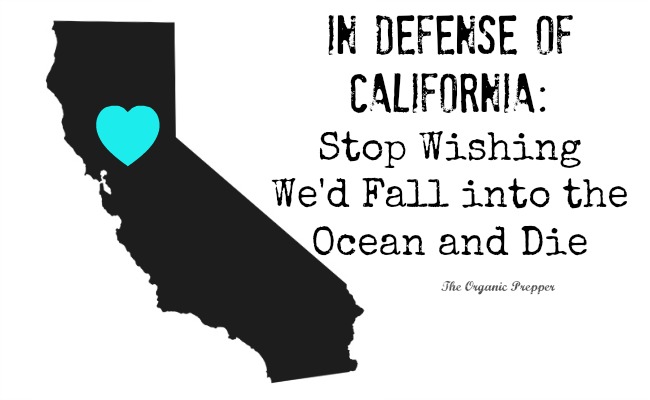 Not great qualities for a state, I have to admit.

I can’t tell you how many times people have blithely suggested that I move. Or that they hold close the fervent wish that our state should break off with the next earthquake and fall into the ocean. Or that they lump every single Californian in with the Obama-loving, gum-chewing, impractical folks that are always the ones representing us on TV.

There are a lot of reasons why I live in California.  And if you read this article with an open mind, maybe you’ll start to see why you should stop  insulting an entire state’s worth of people over the actions of a certain percentage. Maybe not, and if you can’t grasp the reasons, then feel free to carry on with your generalizations. (Which, I might add, are the sign of a less-than-critically-thinking mind. When one paints with a broad brush, one is unable to grasp the fine details.)

#1. We have friends and family here.

So, you think that those of us who love America should all just up and move.

Is it really that easy when you’ve made a life for yourself?  We have friends and family here.  If they aren’t on board with a group relocation, do we just leave them to fight the battle alone?  What about those who have elderly parents? What about those with huge extended families?

My family and I have more friends in our beautiful part of the state than we’ve ever had before, and we’ve lived a lot of places, both in the US and Canada. We have found more like-minded people in our particular county than any place we’ve ever lived.  And by more, I mean numbering in the thousands. We belong to a group of homesteaders with  a real sense of community, where we barter jam for eggs, volunteer time at each other’s farms, share knowledge, and lend a helping hand.

Last year when the forest fires swept our part of the state, members of our community housed entire families, livestock, and pets. They drove into the danger zones to help people evacuate their farm animals. They set up temporary shelters on their own farms. They fed people who were displaced. They provided a sense of fellowship that reminded me of days gone by, when people helped others raise their barns and brought over a casserole when someone was ill.

Why on earth would I leave a group of friends like this? It’s pretty unique to find a place where you fit in, especially if you are a fan of the self-reliant lifestyle. Many people in this state love liberty and independence just as much as you do, in whichever supposedly superior state you call home.

Many of the people I love most in the world live here, and when you wish earthquakes and tsunamis on California, you’re wishing it on me, my child, my loved ones, and my dear friends. If you’re reading this and you’re one of the death-wishers, please know that I think you are an ignorant jerk.

It isn’t just the people. We have a home. A home in a place where the weather is wonderful and mild 10 months out of the year. We have a long growing season, outrageously beautiful views, and a place we love.  We’ve invested time and money into making our home productive and self-reliant.

And what about the folks who have worked the same piece of land for generations?

There are ranchers in our area that are the third generation to run cattle on their swath of acreage.  Are you suggesting they just say, “To heck with it” and bail on their land?  Wouldn’t the government love that? Do you honestly think this is a good idea?

It would be like the BLM and Bundy Ranch in Nevada all over again, as land rich with resources reverted back to the government.

And don’t be fooled, the resources here are incredible

. The entire state is NOT a desert. We have glorious mountains, forests loaded with timber, fresh pure mountain water, rolling hills, lush green oceanside regions, rivers with gold in them, and rich farmland. We have plains studded with cattle, verdant orchards, and ancient mystical redwood forests in which some of the trees actually predate the birth of Christ.

#3.  We are your first line of defense against terrifying legal precedents.

Every time a bad law passes in one state, it sets a precedent that makes it easier to pass that law elsewhere. It’s pretty easy to pick on the laws that have passed, but what about the ones that haven’t, because liberty-minded people fought them tooth and toenail?  What about the bad laws we’ve fought to get repealed, like the 10 day waiting period for firearms?  Do you think that just magically happened, that the gun fairy did it, or that people worked diligently to overturn it?

The state is loaded with activists, fighting for the right to produce food, fighting against the sale of our resources to corporate big spenders, and battling the expansion of Big Biotech and their GMO crops

. Down in the southern part of the state is the headquarters of The Anti-Media, a vocal group of activists who fight police brutality, Monsanto, and Big Government.

For the record, California is not actually the least free state in the union.  In various rankings, you’ll find that Maryland, New York, New Jersey, and Rhode Island often score worse.  And no one wishes the residents of those states a watery. apocalyptic death.  And good grief, have you taken a look at the gun control laws in Washington, DC lately?  They make our state look like a haven of freedom in comparison.

#4.  The police state isn’t going to stop at the state line.

Also,  speaking of precedents, do you think that the overthrow of liberty will stop at the state line? If we move to a state that is “more free,” do you think it will stay that way forever?

Think about Obama’s overuse of executive orders. Those apply nationally, my friends, not just to California.  What do we do when bad laws happen in the state where we theoretically opt to move? Do we move again? And when the police state follows us to the third location, do we just give up and leave the country entirely?  Where does the running end? The police state is a contagious disease that is not contained to one geographic location. It gains a foothold then races like a wildfire to other areas. You can dig in and fight that fire, or you can run forever.

So no, I’m not going to run. Why the heck should I?

I’m not going to bail on this part of the country. I’ll stand my ground and fight my battle on my home turf.  A home turf that includes a beautiful climate, abundant wildlife, and rugged, glorious mountains that take my breath away every time I look out the window. A home that includes loved ones who fight with me. A home with a true community that gives generously of time and experience.

Do you honestly feel that ceding territory is the best way to win a fight? Because that’s just not how we roll here in my part of the world.

Stand with us instead of against us.

The principle of divide-and-conquer is working, and if you are one of those folks sending mental death rays to the residents of our state, well, you have been successfully manipulated. “They” have won. You might as well go keep up with the Kardashians because you really aren’t as aware and awake as you think you are.

When you buy into the media-driven image of the West Coast and hope an earthquake destroys us all, you’re letting “them” win.  You just  rejected an entire state through ignorant, uninformed, personal bias and you completely disregarded your allies in that place.

Instead of just complaining and wishing bad things upon us, perhaps you should be a little more thankful for the hundreds of thousands of like-minded, awake people who are sturdy and self-reliant. and who rebel in the name of personal liberty. Maybe you should support us instead of wishing your fellow countrymen dead.

There are many people here, and in every state, who quietly stand our ground, refusing to accept tyranny.  Perhaps you could save your  disparaging opinions for those who really deserve it, like the politicians who are running the country into the ground and getting super-rich by selling out to corporate interests.

It’s time for us to become one country again.  It’s time to stop blithely painting 320 million Americans with the same brush.  It’s time to look for some common ground so that we can unite and stand strong against the real adversaries of personal liberty.