DuckDuckGo Has Joined the Censorship Ranks with Google 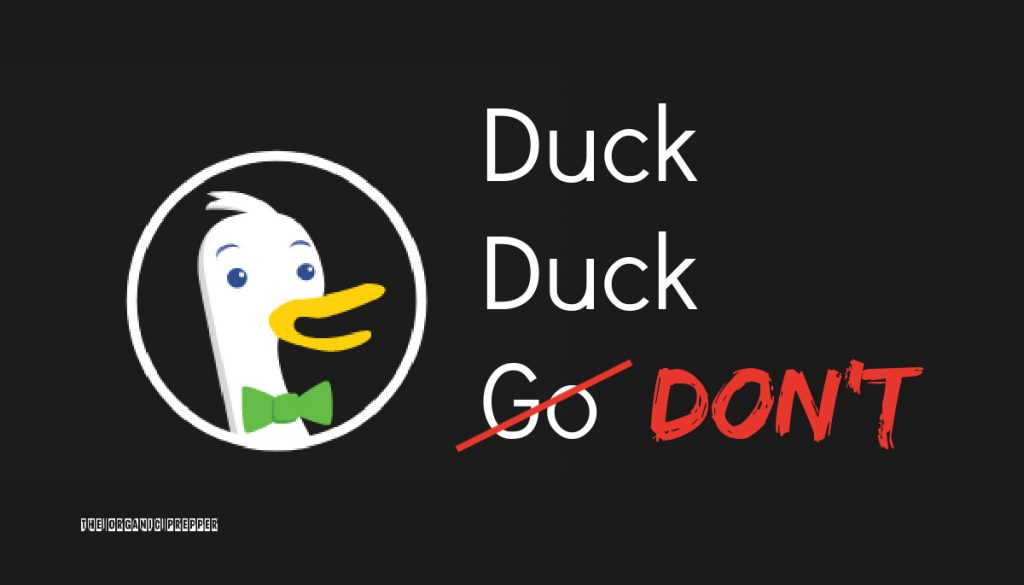 As the silencing of all anti-MSM narratives grew throughout Big Tech, people around the world began to abandon Google, Safari, and other search engines for DuckDuckGo instead. Rush Limbaugh seemingly was a huge proponent of the search engine before he passed away due to cancer, and Americans everywhere finally felt as if they had not only found a search engine that would actually “not be evil” (what Google’s motto tells people to do), but that would protect their privacy, and allow for free searching of the internet without search results being toyed with.

That has now all ended.

As the mainstream narrative has merged into a proclamation that vodka must be poured out, Ukrainian Nazis must be supported, and that there is too much Russian disinformation out there, DuckDuckGo has now stated they are now going to begin downranking sites they deem to be Russian disinformation.

In addition to down-ranking sites associated with disinformation, we also often place news modules and information boxes at the top of DuckDuckGo search results (where they are seen and clicked the most) to highlight quality information for rapidly unfolding topics.

Here’s the problem, though: who gets to decide what is disinformation?

If anything, the past two years have taught us that the arbiters of truth are often blatantly lying to us. Two weeks to flatten the curve was anything but. Remember when saying anything counter to the Jussie Smollet narrative was a “dangerous conspiracy?”

Too many “conspiracies” were later revealed to be true by the establishment after the truth became too widespread and irrefutable. The downranking of what is deemed “disinformation” is often nothing more than a facade for the silencing of those we do not agree with.

When users began to respond to DuckDuckGo’s CEO/founder Gabriel Weinberg’s tweets, making it clear that avoiding downranking was the reason they had chosen to utilize the search engine, Weinberg replied that DuckDuckGo was about privacy.

This seems to be a misunderstanding on Gabriel’s part as to why so many users use DuckDuckGo, to begin with.

Sure, these people are most certainly interested in privacy, but DuckDuckGo found a wealth of new users as a result of the silencing of pro-American voices by Big Tech. People flocked to the platform with the hopes of finally having a means of finding information related to a topic without having to worry about the results of what they were searching for had been tinkered with to mesh with a political narrative.

(Pssst! You! Yeah, YOU! Check out our free QUICKSTART Guide on how to starve the beast.)

For these users to once more discover that their search engine of choice has resorted to filtering out “disinformation” only brings up bad memories reminiscent of Big Tech’s actions in the past (and modern-day, as well).

If one will remember, back from 2020, DuckDuckGo actually had something of a public relations problem after TechWorm (and others) reported that DuckDuckGo had been transferring users’ browser history to DDG servers without the end user’s consent. Whether this was done intentionally or not, the point remains that this created a serious degree of suspicion among the public on whether or not DuckDuckGo actually was as private as they claimed to be.

Gabriel Weinberg may have just caused irreparable damage to his company with this virtue signal.

There are multiple reports surfacing on social media of people who have already left the search engine never to return.

Is anyone aware of an unbiased search engine? I ran out of options. #followerpower#DuckDuckGo BUSTED pic.twitter.com/tTe9wAlQxu

We’ll see if it continues to ensure our privacy and freedoms. We need more alt tech platforms to combat censorship now more than ever. pic.twitter.com/7UpLHCpcOT

It had previously been reported that DuckDuckGo was responsible for 3% of all internet searches throughout the globe. It’s very plausible that this move by Weinberg will cause him to drop down to a decimal of all internet searches throughout the globe. I am personally of the notion that Weinberg is going to have to engage in a mass series of layoffs at DuckDuckGo in the very near future.

There will still be people who use the app out of laziness or (potentially) agreement with Weinberg’s position, but from my own anecdotal experience, everyone I know of who uses DDG is likely to seek alternative search engines, and I don’t think my experience here is the anomaly. DuckDuckGo had a very specific customer base, and Weinberg just voluntarily pushed them away. And for what? Both Ukraine and Russia have serious levels of propaganda that are being pumped out at the moment. Does Weinberg expect his customer base to trust him with dictating what is truth and what is not here?

Alternatives to DuckDuckGo are stepping into the newfound gap.

In response to DuckDuckGo’s announcement, the search engine Brave has come out to state that they don’t downrank/censor any of their search results and never will. This is an obvious move to harvest users who are looking for an alternative to DuckDuckGo as the exodus commences, and it very likely is going to work. Brave saw a massive spike in users throughout 2020, and it’s likely to see even more this year.

People don’t like search results being hidden from them. People don’t like being told what to believe, what is real, and what is not. People want to discover the truth for themselves – to make their own decisions. And it’s because of Weinberg’s refusal to acknowledge this that his company is in for hard times ahead.

Do you think Duck Duck Go is justified in downranking Russian sites?  Will you change search engines? Which search engines do you recommend? Let’s talk about it in the comments.