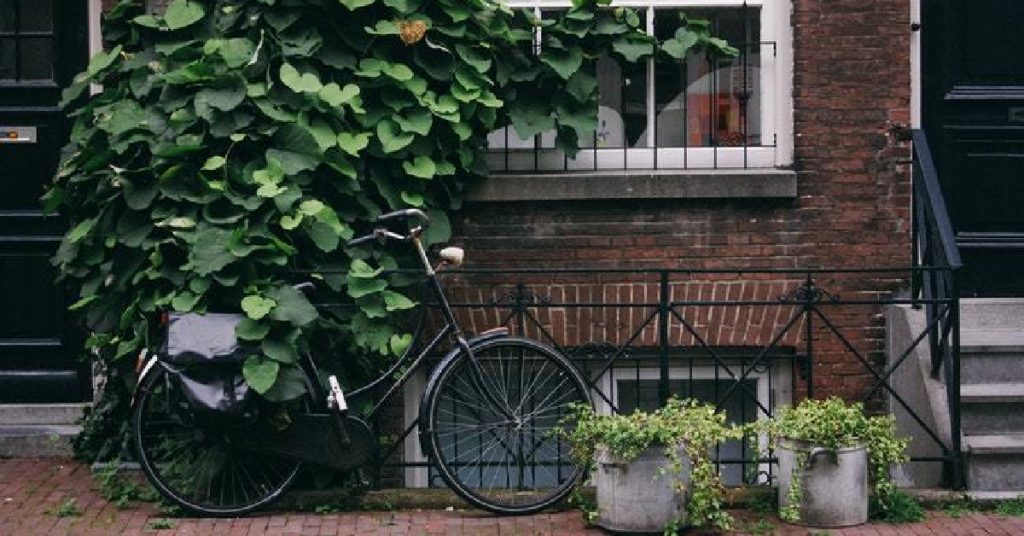 I used to have that idyllic country lifestyle that most preppers dream about. Chickens, goats, acreage, a creek running through the backyard, and most of all, seclusion. It was wonderful. I learned so much about raising animals, keeping hungry deer out of my garden, and being self-reliant to a much larger degree.

But then life happened and that wasn’t going to work for us anymore. My precocious kid graduated homeschool at 16 and wasn’t able to follow her dreams in the state and location where we lived. Obviously, at that age, I wasn’t about to turn her loose to go to school in a different state, so we relocated.

We moved to a suburban area in southern Virginia.  Gone was the acreage and the privacy, but that didn’t mean that I gave up on prepping. No way! I firmly believe that no matter where you live, you can be prepared. You may not be able to have a whole farm but you can still be self-reliant and prepped.

However, city prepping and country prepping are two different animals. Here are some of the ways that it’s different.

#1) You have to reign in the redneck when you’re in town.

When I lived out in the boondocks, nobody cared when there was a faint odor of livestock, mud in the mudroom, and hay in the back of the Jeep. In the city, things are a little different. If I set up an ugly, makeshift greenhouse using a clear plastic tarp and zip ties over a swing set in the front yard, the neighbors would 100% complain. In the country, lots of people have redneck things set up and nobody really cares.

That doesn’t mean you can’t have a greenhouse. It just can’t be in the front yard and it has to be one that looks a little nicer. Heck, you can even have a teeny one on a patio or balcony.

#2) In the city, OPSEC is even more important.

When you live within city limits, you’re bound to have neighbors. That means that OPerational SECurity is even more important than it is in the country, where you have a privacy buffer between yourself and other people.

In the city, you don’t want to be seen lugging in buckets and buckets of emergency food. People will comment something along the lines of “You got a bunker down there?”  It’s a joke now, but if they’re going hungry later, they’ll remember it.

In the city, everything you do outdoors has the capacity to be seen from by a person outside the family. Even if your back yard is fenced, a person on the second floor of another home will be able to see inside. So, your garden and your urban chickens? Everybody will know about them.

#3) In the city, you can’t go whole-hog (literally) on self-reliance.

There are a lot of things you can do in the city to be more self-reliant, but it should more look like a quirky hobby than an effort to set up a full-on homestead.

Your livestock will be limited to chickens and rabbits (if that – check your municipal website to find out what your local laws are.)  You aren’t going to be able to raise pigs or goats, and there will be no backyard butchering station in most cities.

There’s only so much of a garden you can have because there’s only so many places in your city yard with good sunlight where it’s also socially acceptable to plant vegetables. (But if you’re creative, there are quite a few things you can sneak in.)

#4) In the city, there are fewer 4-legged predators and foragers.

When I lived in the country, it was a constant battle to keep things (besides us) from eating our chickens and getting into our gardens. Between the bears, the mountain lions, the foxes, the coyotes, and the deer, raising food in the boondocks isn’t as easy as people expect it will be.

In the city, you are unlikely to have to worry about any of these things. The only trouble we’ve had have been from skunks, raccoons, and groundhogs. I’m sure there is no place completely free of varmints that want what you’re raising, but it really is easier to protect hens and veggies within city limits.

#5) In the city, you have access to a lot of stuff nearby.

This would most likely change if times were really bad, but within walking distance of our home, we have a co-op, a huge weekly farmer’s market, a community garden, and a meat market that sells only local products.

Throughout the growing season, we hit the market right before it closes and cart home tons more produce than we could ever grow, even in the country.  Then, in my nice big city kitchen, I dehydrate, can, and freeze all day Sunday. Sure, I did this in the country, too, but I had to drive more than an hour round trip to do it.

And the shopping is great, too. We have every possible big box store within 30 minutes of us, as well as many grocery stores within that same circle of convenience. Shopping the sales has never been easier. When we lived in the country, we just hit one store that regularly had the best prices, but here I can purchase the loss leaders from 4-5 different stores within an hour or two. It’s made a massive difference in our budget.

There’s a lot of convenience to living in a place where you can get things that you’d normally have to drive an hour to purchase.

#6) In the city, you have neighbors that can help you quickly.

We have been fortunate to have wonderful neighbors, although I know from experience this isn’t always the case. When I was recently recovering from surgery, our next-door neighbors were great about asking if we needed anything from the store, taking our trash to the curb and bringing it back in, and offering rides to appointments. If my daughter had needed help, it would have been right there, seconds away.

When another neighbor’s husband had a heart attack in the back yard, we heard a commotion and were over there helping out immediately while awaiting the ambulance. We took care of their dog and cat while he was in the hospital and left meals in the refrigerator that could be heated up when our neighbor returned home to get some rest after a long day at the hospital.

I know for a fact that country neighbors are great, too. In the city, however, you get to have a network close by.

Also, while I’m not recommending that 911 be your official home defense plan, you generally get a much faster response from police, fire, and ambulances in town. Where I lived before, it took a minimum of 45 minutes for the aid to arrive.

#7) In the city, a lot of your preps look environmentally friendly.

City folks are big into the environment and you can use that to your advantage when prepping. You can compost, you can have rain barrels, in many towns you can keep chickens, and you can do all sorts of things that preppers do while looking like another city hipster.

There is even a massive community garden just a couple of blocks from my house. I have a tiny little plot there, mostly so I can get to know other self-reliant souls.

You can be self-reliant in the city.

City life is very different from country life, but it’s certainly not impossible to be self-reliant. We’ve had fantastic luck with our gardens, we’re allowed to have up to 5 hens, and we can access more stuff much easier than we could when we lived in the boonies. Having neighbors has been a really nice change, and we’ve enjoyed this experience.

To the people who walk past my house to go to the park down the street (with walnut trees and a river, by the way) I just look like a city gal who has some flowering vines and a couple of big dogs. To my neighbors, I’m the friend who swaps my tomatoes for their mulberries (and brings them a jar of homemade jam.)  I have 48 different grocery stores to choose from within 45 minutes of my home, as well as 4 farmers markets and farms with produce stands. (No patterns of buying tons of stuff with all that variety!)

I still can and dehydrate, I still cook from scratch, and I still raise and forage for some of my own food. I have supplies, nearby water sources, and great neighbors. I have a plan for a wide variety of emergencies. (You can check out my new workbook to create your own plan.)

I firmly believe that you can be prepped anywhere. Life doesn’t always plant you in the “ideal” location, but it doesn’t mean that you can’t be prepared.  I’m not saying that city prepping is necessarily better than country prepping but it sure does have some nice benefits.

There will be variables, of course, in any setting, but you can prep anywhere. Don’t let anyone tell you that it can’t be done.

I started out in the city and to the city, I returned.  I loved living in the country, but there are also many things I enjoy about city life. And in either place, I am prepared.

Has anyone ever turned up their nose at your location? What do you see as the pros and cons of prepping in different environments? Share your thoughts in the comments below. 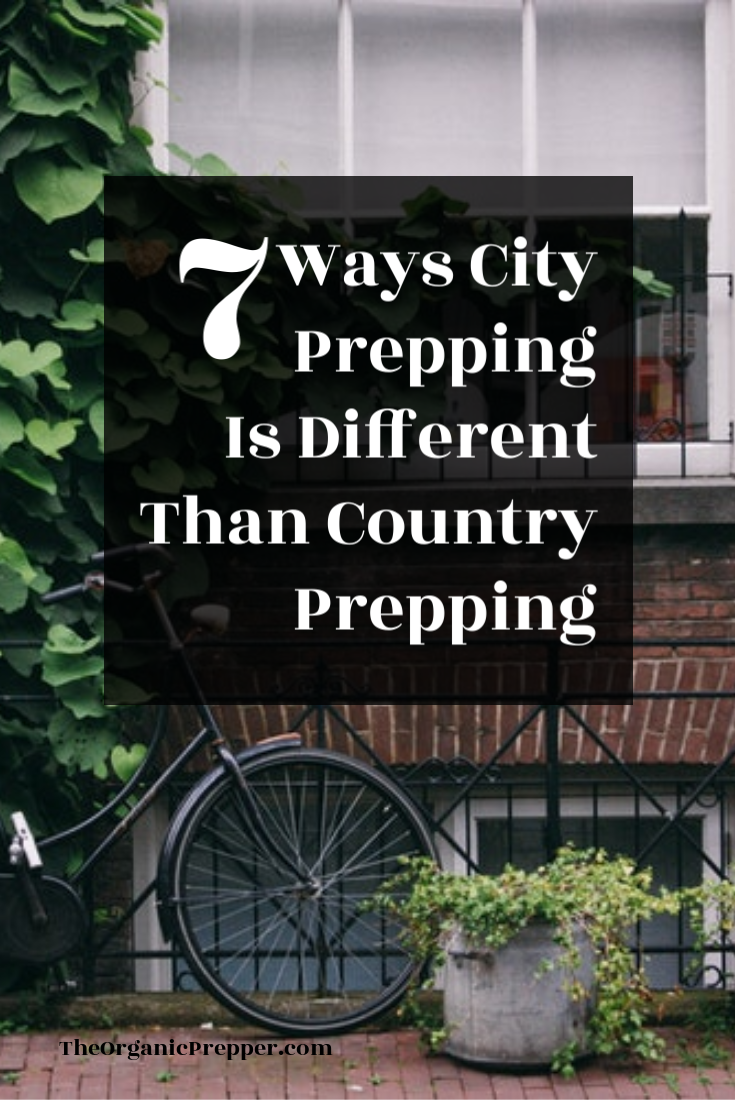