The Citizen App: A Questionable Idea That Could Go Horribly Wrong 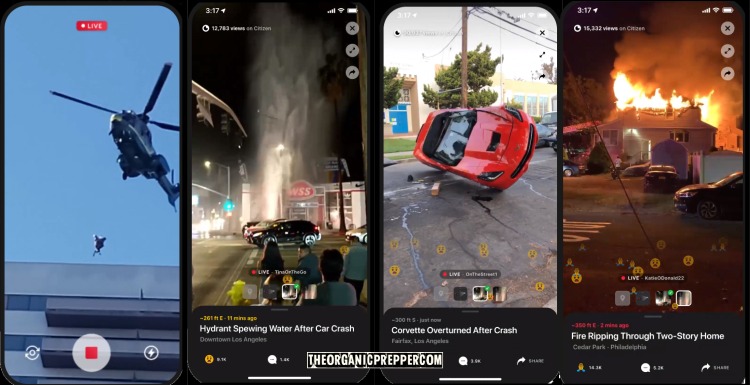 Author of Zombie Choices and The Faithful Prepper

Here in America, we already have facial recognition cameras, traffic cameras, and police cameras watching us 24/7. The Daily Mail reports security cameras record the typical American 238 times a week. And should something terrible happen, such as a fire, burglary, or murder, it’s only a matter of time before news agencies show up with their cameras.

Now, add civilians to the mix, spending all day with the sole goal of filming local events. Imagine your family members or co-workers running off to crime scenes or horrific car accidents at the urging of an app on their phone.

Citizen relaunched the app (first launched as Vigilante and quickly removed from the Apple App store over safety concerns) in 2020. Citizen recruits people in select cities to keep their phones at the ready should there be an emergency alert sent out by the app. Should an alert be sent, the user gets to the scene as quickly as possible and begins filming. Citizen pays $200 a day to these “field team members.”

According to Citizen, this helps to make for a safer community. Other app users will now have live intel on events happening around them and make appropriate safety decisions. Citizen uses radio antennas to monitor the 911 communications in several major cities. As of this writing, there are over 60 cities covered, including:

Could the Citizen App be beneficial?

The app is ever-growing in popularity as well, with over 7 million users. The Citizen app will only prove to be more effective as time goes on. It has to have a broad user base, or else the whole thing crumbles. It doesn’t do too much good if only three people in America are helping to give you real-time video footage.

Outside of alerting you of potential danger, there seem to be some additional benefits to the Citizen app. According to a quote on Citizen’s website by an NYC trauma surgeon, “Because Citizen alerted me about a medical emergency near the hospital where I work, I was able to prepare an operating room more than 20 minutes before EMS called us about the patient. We saved his life because we had that extra time from Citizen. Those minutes matter.”

The Citizen app helped find an abducted boy in Manhattan by alerting all its users of the abduction. Citizen users throughout the city were able to keep watch of whether or not the child was moving through their location. The end result was a rescued child because of people who were willing to step in and help.

Does the Citizen App entice people to run into dangerous situations?

One of the chief concerns raised regarding the Citizen app is that it causes people to run to the site of danger. In the event of a stabbing, explosion, or some other hazardous situation, people could be putting their very lives in danger. Of course, paramedics, firefighters, first responders, and others run into harm’s way daily. However, it’s hard to argue this is a good idea for the lone college girl looking to make some extra money on the side.

Perhaps the Citizen app is improving the safety of the people who are just watching the video footage. But what about the cameraman? If the “field team member” is in the vicinity of the event anyway – let’s say the app user’s apartment is across the street from the house fire – they can provide footage from the safety of their home.

What if the app causes the accusation of innocent people?

That is precisely what happened earlier this year. In May, Police detained a Los Angeles man after the Citizen app reported him as an arson suspect. Citizen offered a $30000 reward for the information leading to his arrest and broadcast a photo of him to a reported 861,000 viewers.

Authorities found the man innocent and released him.

Former employees of Citizen believe the app is returning to its Vigilante days. One former employee said a lack of in-depth vetting caused him to doubt the app’s accuracy. He also had this to say:

“It fuels public insanity and fear,” the former employee said. “The effect of Citizen is to make everybody afraid in a community. I’m not a supporter. I tell people that.” [source]

Do you want to be watched and monitored 24/7?

To use the Citizen app, you have to permit them to see your location. Doing so enables the app to know what sources of danger may be near you right at the moment. That may be a source of contention for some people, wouldn’t you agree?

Do you like the idea of a company knowing where you’re at 24/7?

Citizen also offers Covid surveillance with a feature titled SafeTrace. Using the Bluetooth capabilities of your phone, Citizen can then monitor whether or not you’ve come into proximity with somebody diagnosed with COVID. If you were exposed, Citizen will then alert you, tell you to isolate, and ship you a COVID test you administer to yourself at home.

Wait, that’s not all.

If you diagnose as positive, Citizen then alerts all other users who came into contact with you. In addition to this, Citizen has a related feature called SafePass, a shareable COVID health summary. Within your SafePass, you can tell others how you feel, whether you’ve had any known exposures, and what the results of your recent COVID test are.

Is the Citizen App creating good citizens or snitches?

The idea of somebody ‘discreetly’ listening in on your phone’s microphone as you go about your daily business seems a bit invasive. We already live in a world surrounded by cameras. This app would add countless more. If you end up in a fender bender, do you like the idea of having your situation broadcast to anyone who wants to look? Does the thought of paid field team members watching and recording you and then putting that information out there for all to see appeal to you?

So, is Citizen in your favor? Let us know your thoughts in the comments.