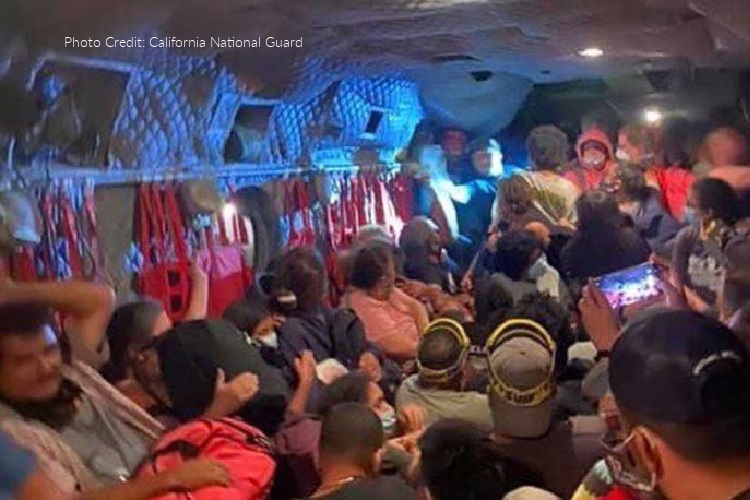 It’s Labor Day weekend. You’re heading out with the family to celebrate summer’s last hurrah. You decide to go camping at remote campground by a peaceful reservoir which is only reachable by a narrow, curving road.

Then suddenly, that place that looked like paradise turns into the location that may end up being your grave. Your peaceful weekend becomes a fight for survival. 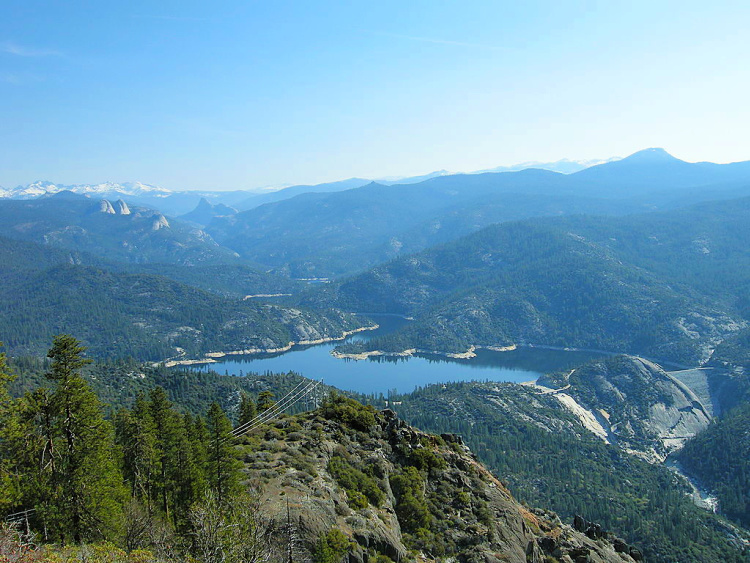 This is exactly what happened to more than a thousand people who went camping at Mammoth Pools Reservoir this weekend in California. A fast-moving wildfire called the Creek Fire erupted and spread rapidly. The fire devoured 45,500 acres within the first 24 hours and jumped the San Joaquin River, trapping people all over the forest.

Shelter in place, even if you have to get in the water.

On Saturday, despite the mandatory evacuation, many campers were left with no way to evacuate the area, since there was only one road in and out.

“There is an immediate threat to life,” the Sheriff’s Office warned. “The area is being closed to public access. Take action immediately.”

As roads closed and the fire spread, Tune said, more than 1,000 were trapped near Mammoth Pool Reservoir, roughly 23 miles southeast of Oakhurst.

Those trapped were told to shelter in place — even if it meant getting into the water, Tune said.

A few hours later, the Sheriff’s Office confirmed at least 10 people were injured and several others remained in danger among those stranded near Mammoth Pool…

”Mainly our focus is the safety of all the folks all over the forest,” Tune said, “just making sure folks are safe and get them evacuated.” (source)

But this evacuation was not going to be simple.

In what must have been a terrifying scenario, numerous injuries occurred to people fleeing the fire as they made life-and-death decisions.

Many people rescued from the Creek Fire at Mammoth Pool suffered burns and broken bones, trying to escape the fire “at all costs,” according to a Fresno County official.

Helicopter crews began rescuing people trapped by the wildfire at Mammoth Pool, Cascadel Woods, and Minarets about 8:30 p.m. Saturday. Crews first rescued about 60 people, who were treated for injuries at Fresno Yosemite International Airport in Fresno. By the end of the night, 218 people were rescued by helicopter, Lynch said.

About 20 victims were transported to area hospitals with injuries, including severe burns, broken bones, and other cuts and scrapes.

“Listening to the stories people were sharing, we have to assume these people were trying to escape with their lives intact. They had to make decisions that put their body in peril and caused them these injuries,” Lynch said. “They talked about there being fire on both sides of them while going down the road. There was one vehicle crash. People were stuck in the middle of flames.” (source)

Somewhere around 800 people managed to evacuate the fire, but more people remained stranded.

There was no way out.

Dennis Drake was camping with his brother’s family when they noticed smoke in the distance – about fifty miles away.

But in a matter of hours…

It ballooned to more than 73-thousand acres by Sunday night.

Drake and his brother’s family tried to drive out of harm’s way– but didn’t get far.

“There’s fires on both sides of us, we have no protection,” he says.

Everyone in the area scrambled.

The reservoir, became their haven.

Rescue…and survival…seemed impossible due to the intense heat and thick smoke.

Two hundred people were still cut off from rescuers.

On the other side of the lake, at least 200 people remained cut off from rescue and the possibility of evacuation. CalFire was unable to reach the campers, and that’s when the California National Guard came in with a rescue that should go down in history. From the Facebook page, ASMDSS (Awesome Sh*t My Drill Sergeant Said):

Don’t know if you guys have seen this going around, but California National Guard aviators let their big brass ones hang out on this one.

Two aircrews, a Blackhawk and a Chinook Flew at night with NODs through high winds with burning embers, heavy smoke and difficult terrain to rescue over 200 people completely cut off and trapped by fire with it closing in on them last night. They made multiple trips to get everyone out.

CalFire waived them off and warned them do not go because the conditions were too dangerous. They said fuck that and went anyway.

Second pic is view from the chinook cockpit on the ground while loading first group of people.

Our hats are off to the pilots and crew. I hope they are able to get you guys wheelbarrows big enough for your cajones. (source)

Here’s the view from the cockpit mentioned in the post. 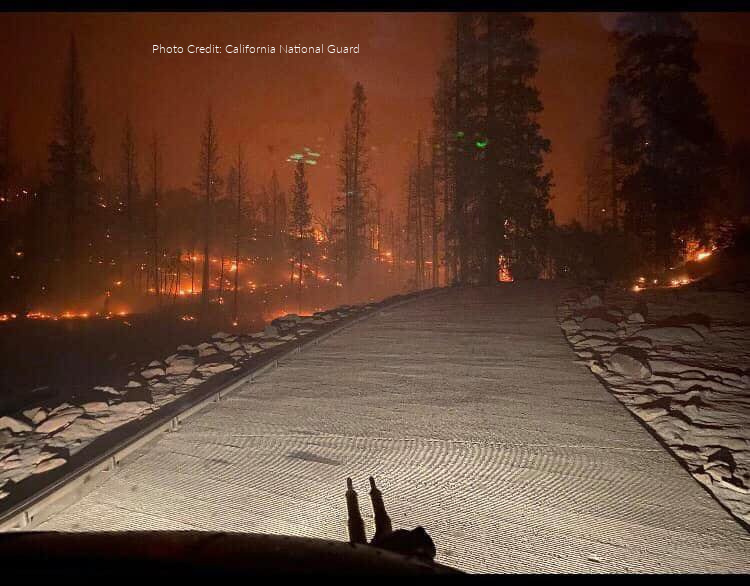 Simply extraordinary, lifesaving work by the @CalGuard airlifting more than 200 people to safety overnight from the imminent danger of the #CreekFire The National Guard stands Always Ready, Always There to support our communities and nation in times of need. pic.twitter.com/MybDKESipJ

Colonel Dave Hall, Commander of the 40th Combat Aviation Brigade, says that military technology made the mission possible, particularly the night vision equipment that allowed them to see through the smoke to where the survivors were.

Hall says a Chinook Helicopter and a Black Hawk Helicopter made three trips each– sometimes carrying up to 60 people, to capacity.

“It was pretty cramped tight in there. We do not like to operate that way, but because of the circumstances of this being an urgent situation threatening life, the pilots in command made the smart decision by loading them to get on the helicopter and loading as many as they could on that lift,” Hall said. (source)

There are still people trapped by the fire.

After this extraordinary effort, there were approximately 20 people and 15 dogs left and the rescue has been difficult. The Aviation Brigade was unable to get to them when the smoke intensified further. According to the Fresno Bee: ” The California National Guard was planning a second rescue attempt Sunday night, coordinating a ground rescue that would potentially require a bulldozer to move abandoned vehicles.”

The last report I was able to find on this was from late last night. If anyone has further information (with links) please share it in the comments so I can update this article.

UPDATE: 46 remaining campers AND their dogs were rescued by helicopter on Tuesday afternoon, Sept. 8.

The inferno shows no signs of slowing down.