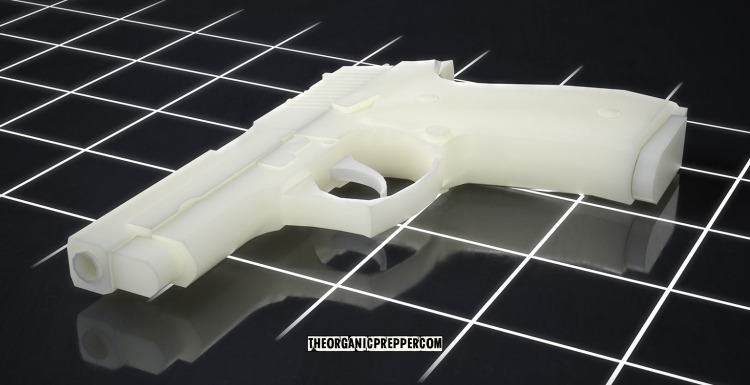 by Aden Tate
Author of The Faithful Prepper and Zombie Choices

Nobody loves controlling others more than the government, so it’s no surprise that they’re desperate to ban 3-d printed guns. Right now, the US legislature has introduced two separate yet identical bills that would outright ban the creation of 3D-printed guns or the dissemination of the code for doing so.

HR 4225 was introduced to the House Committee on the Judiciary on June 29 of this year by Representative Ted Deutsch (D-FL). A few short days later, an identical bill, S.2319, was introduced by Senator Ed Markey (D-MA) in the Senate. [Source]

They’re ready to take gun control to a whole new level with this.

But you may know it as its mainstream media coined term: The Ghost Gun Ban

According to the US government, the stated intention of S.2319 is “to amend chapter 44 of title 18, United States Code, to prohibit the distribution of 3D printer plans for the printing of firearms, and for other purposes.” After the bill was introduced, 27 Senators throughout the US – all Democrat (with the exception of stated Independent, Bernie Sanders) – jumped on board to sign it. They are:

All these folks can’t wait to ban 3-d printed guns.

What does this mean for aficionados if they ban 3-D printed guns ?

Should this bill be passed to ban 3-D printed guns, it likely means that tens of thousands (if not more) of Americans would instantly become criminals overnight.  (This is nothing new for gun control aficionados in the government.) What was once legal for any free man would become criminal and likely result in the ATF being sent to the scene.

If you’ve purchased a 3D printer in the past, this bill could easily result in additional policies decreeing your need to register your printers, filaments, and other 3D printer-associated tools.

Furthermore, this bill would make even posting the schematics for 3D printed guns online illegal. This is something that’s never been done before in American history.

What do I mean by this?

One has always been able to find gun blueprints in America. The United States has a long history of “backyard gunsmiths,” if you will, and it’s never been illegal before. Firearm schematics are readily available for those with a metal lathe, machining equipment, and the desire to craft their own weapon.

But now that more people can engage in the act, it’s been decided it needs to be made illegal. Hence, it isn’t enough to ban 3D-printed guns alone. They must also ban all online 3D printed gun plans.

Here’s the problem, though:

The founder of 3D printed guns, Cody Wilson, actually settled a hefty court case with the US State Department after successfully arguing that code is free speech and thus, he’d done nothing wrong by disseminating his code to the world. [source]

If such were made illegal, what type of code would follow?

Would any form of encrypted messengers, such as Signal, soon be determined to be a ‘threat’ and thus made illegal? (Don’t think that can’t happen. It’s already been discussed.)  If you discussed how to reload ammunition online in a forum with a reloading newcomer, could you later be the subject of legislative action?

What if you just taught a friend how to shoot at your farm? What if you teach your son how to hunt? In both cases, you’ve used words to instruct somebody else on how to use a firearm? Could that be subject to legislation down the road should this bill be passed? A similar bill about instructing others that was allegedly meant to discourage informal militias was brought up in Virginia back in 2020.

Couldn’t every firearm book in existence that teaches people how to reload, shoot, clean a gun, etc., fall under the jurisdiction of such a decision?

The Constitution has been forsaken

We’ve already seen that the American justice system has a long history of resorting to case law rather than Constitutional law. The passing of this bill would only make the arguing for further infringements of human freedom even easier for these people.

Further examples would be how this bill could open the door for every conceivable firearm part or accessory out there now needing to be registered. Diagrams for any such part – say for something as simple as a pair of flip-up sights – could be rendered illegal overnight. Now, millions of Americans would be deemed criminals in need of punishment.

What would this mean for the gunsmith industry?

Would you be able to continue practicing your trade? Within the world of firearms, prices would reach such exorbitant levels that nobody would be able to afford guns or ammunition.

Well, if every firearm component has to be stamped and registered, you’re talking about forcing every manufacturer out there to invest money in stamping equipment. You’re talking about a considerable expense, extra employees, and extra training. The registration process would require additional time, likely include a tax of some sort, and would create a host of legal hoops to jump through. And nobody’s just going to eat that cost. They will send it directly to the consumer.

The adjustable AR-15 stock you once bought for $60 could now easily be $100. The AK-47 you’ve had your eyes on could now be selling for 4x higher than in prior years. This would effectively mean that only those with enough disposable income, along with the capability and wherewithal to jump through a circus ring of obstacles, would be able to defend themselves.

Single mothers, fresh college grads, and anybody running on hard times financially (such as those brought about by government-instituted lockdowns) would no longer be able to afford the weapons, ammunition, or training needed to defend themselves.

Do you think the government will succeed in its efforts to ban 3-D printed guns?

When the rights to free speech and self-defense are simultaneously attacked, the only thing coming down the road is slavery.

Do you agree that these regulations would be an infringement on your Constitutional rights? What do you think about the government’s effort to ban 3-d printed guns? Sound off in the comments below!

Aden Tate has a master’s in public health and is a regular contributor to PewPewTactical.com, SurvivalBlog.com, SHTFBlog.com, ApartmentPrepper.com, HomesteadAndPrepper.com, and PrepperPress.com. Along with being a freelance writer, Aden also works part-time as a locksmith. Aden has an LLC for his micro-farm where he raises dairy goats, a pig, honeybees, meat chickens, laying chickens, tomatoes, mushrooms, and greens. Aden has two published books, The Faithful Prepper and Zombie Choices. You can find his podcast The Last American on Preppers’ Broadcasting Network.