Would Your Kids Know How to Survive a School Shooting? 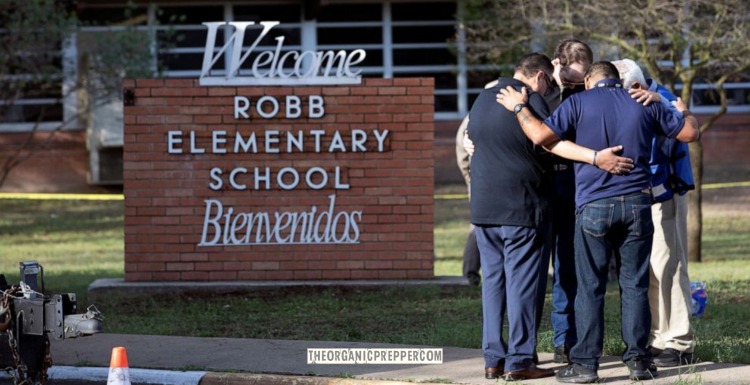 (originally published in May 2018) Imagine getting a phone call like this from your high school-aged child.

Those were the chilling words heard by a mom in Kentucky in 2018 when her son was fleeing from a classmate who killed 2 students and injured 17 more. The two 15-year-olds died at the hands of another 15-year-old boy, who was later arrested.

Shocked students have described the terrifying moment the shooter opened fire before classes began, forcing nearly 100 children to run out of the school and seek safety.

‘He was determined. He knew what he was doing,’ a classmate said of the shooter.

Another student said: ‘No one screamed. It was almost completely silent as people just ran.

‘He just ran out of ammo and couldn’t do anything else. He took off running and tried to get away from the officers.’

…Mitchell Garland, who rushed outside of his business when he heard about the shooting, described seeing the students flee the school.

‘They was running and crying and screaming,’ he said. ‘They were trying to get out of there.’ (source)

The scene was utter pandemonium.

It can happen anywhere.

No place is safe from the violence these days. This was the tiny town of Benton, Kentucky, population 4,531.

Would your child know what to do in the event of a school shooting?

There are a few important things to note in the story about this horrible incident. Four of the kids who were injured weren’t shot – they got hurt fleeing the scene. And secondly, first responders shut down all the exits, meaning the shooter – and kids who were still inside – couldn’t escape.

As horrific as it is to think through a scenario like this, doing so could save your child’s life. And this information isn’t just for kids in the school system. Even homeschooled kids can sometimes be in a situation where they are without a parent and a bad thing happens, like sports practice, church events, or other outings.

One thing to consider that could be pre-emptive is to teach your kids to be nice people. This shooting, like many others, is said to have been triggered by extreme bullying. I’m not blaming the victims who were shot, but we all bear the responsibility to treat others kindly.

Acceptance is the first step to surviving an attack.

In many of the descriptions of this shooting, students said they heard a “popping” noise and didn’t really grasp what was happening.

It’s the actions you take immediately upon the realization something awful is occurring that have the potential to save your life. And the first step to that is accepting that a terrible thing truly is happening. In an article called How to Survive Anything in Three Easy Steps, I wrote:

No matter what situation comes your way, the first step is to accept that whatever the event is, it really happened.  This is tougher than it sounds, because our minds are programmed to protect us from emotional trauma.  Cognitive dissonance means that when a reality is uncomfortable or doesn’t jive with a person’s beliefs, that person may opt to believe in something false just to assuage his desire for comfort. Psychologist Leon Festinger, who identified the principal of cognitive dissonance, suggested

“that a motivational state of inner tension is triggered by logically inconsistent ways of thinking.”

If you’re wondering exactly how powerful cognitive dissonance can be, check out Amanda Ripley’s book, The Unthinkable: Who Survives When Disaster Strikes – and Why

.  Ripley, a journalist, covered many disasters of immense scale: plane crashes, natural disasters, and 9/11.  She became curious about the difference between those who survived, and those who did not, wondering if it was dumb luck or if there was some other quality that made survival more likely. She interviewed hundreds of survivors and got her answer.  The ability to immediately accept what was occurring was the quality most of the survivors possessed.

The story that stands out in my mind the most was the one about the people in the World Trade Center on September 11. They described the last time they saw some of their coworkers.  There were many people who simply could not accept the fact that a plane had crashed into the building and that they must immediately evacuate. They gathered their belongs, tidied their desks, finished reports. They didn’t feel the same sense of urgency that those who survived did, because the situation was so horrible that they just couldn’t accept it. Their inability to accept the scope of the danger caused many of them to perish in a tragic incident that other people, who acted immediately, survived.

When disaster strikes, you can’t spend 5 minutes thinking, “This can’t actually be happening.”  It is happening, and moving past accepting that propels you through the first step into the second one.

Freezing is an innate reaction for some people, but you can train your way through that. Training in self-defense, first aid, and disaster preparedness can help to offset the brain’s neurobiological response that leaves some people paralyzed with fear.

Pat Henry of The Prepper Journal recommends action plan simulations to help you become more prepared for a sudden crisis. He wrote:

When you are out in public, try going for an hour without looking at your phone to start with. Instead, observe your surroundings. Who is near you and who is walking toward you? Does anything seem suspicious? If something were to happen, what would you do and where would you go. Do you know the quickest way to get out if needed? Can you access your concealed weapon if you need to? Imagine what you would do if you were out at a mall with your family and someone started shooting. Where would you take cover? What would be your escape route? What if that was blocked?

It isn’t fun to go through this exercise with your kids, but it could save their lives.

There are 4 courses of action

We can’t always predict when an attack is about to happen. There might be no indications in your immediate surroundings to alert you to the fact that something is going down. At school, your kids are in comfortable surroundings and they don’t have their guards up. They may be blithely unaware until the moment the first shot is fired.

If your child suddenly finds himself/herself in the midst of a school shooting, he/she needs to be ready to take one of the following courses of action:

1) Escape. Get as far away from the threat as possible. If you can do so safely, run for the doors and if you can’t get to a door, don’t be afraid to pick up a chair and smash out a window. This will take some forethought because most kids would need to get past the mental taboo of destroying school property. Teach kids to run for cover as fast as possible.

2) Take cover. If you can’t get away, get behind something solid and wait for your opportunity to either escape or fight back. Make sure your kids know the difference between cover and concealment. Many schools have thick concrete walls that will provide sturdy cover, but a wooden door or a desk will not.

3) Hide. If you are in another part of the building and you hear shots, your first choice should be to escape. But, if you aren’t in a place where you can safely do that, you may be able to quietly hide somewhere. Bathrooms aren’t ideal, but hiding quietly in a locked classroom with the lights out may keep you away from the shooter.

3) Fight back. This is absolutely a last resort. When you aren’t armed, you will be at a serious disadvantage against an armed opponent. The only possible advantage is the element of surprise. Most people with a gun don’t expect a direct challenge. If you have absolutely no other option, you should be prepared to fight for your life. Go in low to knock the shooter down, from behind if possible. A group of students will have a better chance of subduing the shooter than one student alone. Obviously, this is an action to be taken by older kids. Younger children would be unlikely to launch an effective attack.

Some security companies are now doing training with schools to help them respond more effectively in the event of a school shooting. As a parent, encourage your local school board to consider investing in such training.

Have you talked to your children about school shootings?

Have you had this uncomfortable discussion with your children? Do you have tips that weren’t included in this article? Please share them in the comments below.