90% of Wildfires Are Caused by People, Not by “Climate Change” – Here’s Why (and How) You Must Prep Your Home for the Inevitable 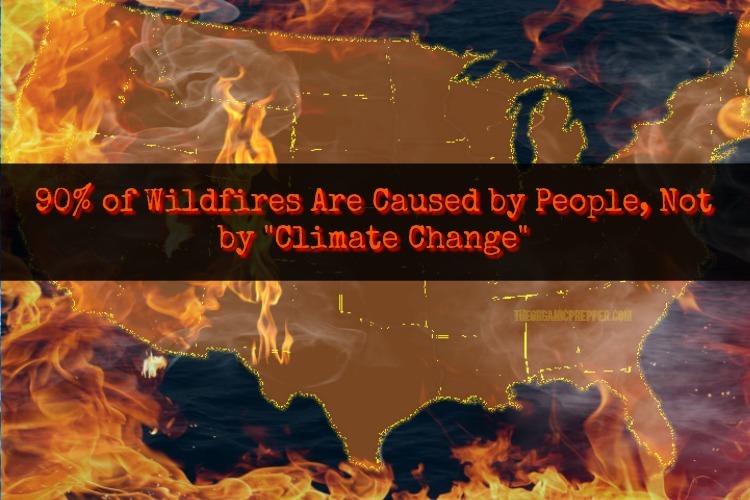 Wildfires have been particularly bad the past few years. It’s part of the reason my family and I moved out of California. (Only part – the laws there are crazy!) And while this year seems worse than ever, the first 6 months are it’s actually not quite as bad as last year, according to the National Interagency Fire Center.

At the time of this writingin 2018, we’ve seen 37591 fires and 4,810,195 acres have burned. By this time last year, there had been 39,227 fires and 5,639,919 acres had been devastated. Of course, this is of little comfort to those dealing with this year’s fires. And right now, wildfires are burning across the nation, from Alaska, all the way to Florida. Here’s the current map from the NOAA that shows where the fires are. 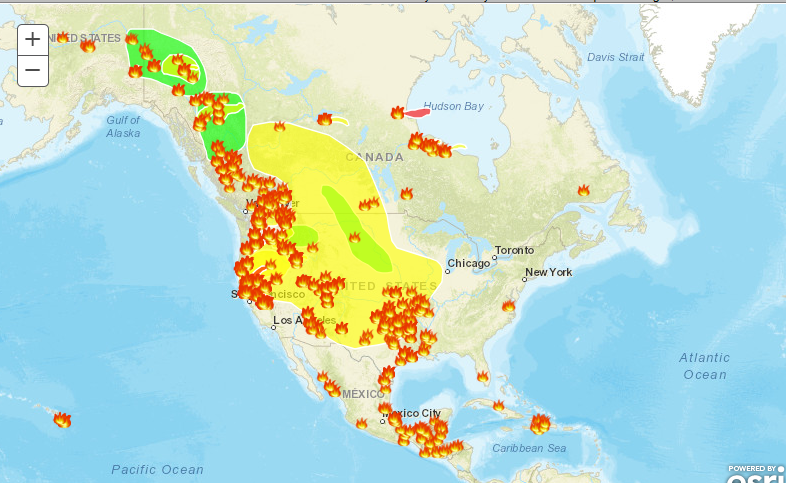 So, basically, everywhere west of Chicago with a couple in the east.

What’s causing all these fires?

Of course, the headlines are all breathlessly claiming that the fires are due to climate change because that’s the current agenda in the straw-seizing, politically correct world.

But the fact is, they’re caused by people. 90% of the fires that are burning and have burned in the United States have been caused by the carelessness or deliberate intent of human beings. The US Department of the Interior says:

Wildfires can be caused by nature — mostly due to lightning strikes — but the vast majority are caused by humans. Research estimates that 90 percent of wildland fires in the United States are caused by people. Some human-caused fires result from campfires left unattended, the burning of debris, and intentional acts of arson. It can also be caused unintentionally by heat and sparks from vehicles and equipment. Public education and personal responsibility can greatly reduce the number of wildfires each year. (source)

Does anyone else remember the Smokey Bear ads? “Only YOU can prevent forest fires?” Something tells me they need to bring Smokey back to teach people how to enjoy nature more responsibly. But human error is only part of the issue.

The fires are more intense now because of the increased fuel loads. Dry grass, unchecked forest growth, and brush all add to the intensity and speed at which a fire burns.

There are three conditions that need to be present in order for a wildfire to burn, which firefighters refer to as the fire triangle: fuel, oxygen, and a heat source. Fuel is any flammable material surrounding a fire, including trees, grasses, brush, even homes. The greater an area’s fuel load, the more intense the fire. Air supplies the oxygen a fire needs to burn. Heat sources help spark the wildfire and bring fuel to temperatures hot enough to ignite. Lightning, burning campfires or cigarettes, hot winds, and even the sun can all provide sufficient heat to spark a wildfire…

Environmental policies that were designed in an effort to protect forests are actually responsible for destroying them because it’s increasing the fuel load for wildfires. A lack of forest management and yes, logging, has created forests so dense that it only takes a spark for them to go up in flames, and all of the fuel results in an intense, fast-moving blaze.

Obviously, drought conditions make everything worse, and California has been on-and-off in a drought forever – or at least the past hundred years.

Wildfires have long been nature’s method of forest management. The US Department of the Interior explains:

Fire has always been a natural process that is essential to healthy ecological systems. In the early 1900s, land management agencies sought to suppress all fires in an effort to preserve the timber supply. Over the decades, fire exclusion led to more living and dead vegetation on the landscape, increasing the fuel and as a result, the risk of large wildfires in our forests, rangelands, and near communities. (source)

A report from the Clemson University newspaper said:

“Fire has always been a natural occurrence in our ecosystem that has many benefits,” said Derrick Phinney, a Clemson Cooperative Extension natural resources division leader based in Dorchester. “As far back as the American Indians, fire was a main staple of forest management. Whether intentionally set or started by lightning strikes, fire regenerates forests, renews the soil and basically resets the clock. But in more recent times, the number of prescribed burns has greatly decreased because of numerous reasons, such as air-quality issues caused by smoke. When highways, schools and hospitals are built near or even within forests, this limits fire usage.”

Because of these limitations, higher-than-normal buildups of undesirable fuel loads, such as invasive undergrowth, brush and ground litter, create conditions that, when combined with drought, low humidity and wind, can result in dire consequences. A fire that would normally flow through a forest doing relatively little harm to the larger trees instead burns so hot that it annihilates everything in its path.

“They burn too hot, they burn too fast, they burn uncontrollably, especially in hilly and mountainous areas,” said Phinney, who has been involved in land management and environmental regulations for close to 20 years. “They say that fire runs up a hill and walks down a hill. Fire basically runs up hills because it super-heats the vegetation above where it’s burning. This can cause incredible damage.” (source)

This leads us to another factor.

Humans live where the fires are.

As mentioned previously, poor forest management has led to additional fuel. Humans have carelessly caused fire after fire. And a third of our growing population lives in areas that are much more prone to burn.

As our population grows, more and more people – one-third of homes, specifically –  live in or near the forests and natural areas, something called Wildland-Urban Interface. According to a report by the USDA, if you are in that interface, sooner or later, you’re going to be at risk of a wildfire. “Homes located anywhere in the WUI will eventually be exposed to wildfire, regardless of vegetation type or potential for large fires.”

This isn’t to say that humans all need to live in the city.

“People move into areas where fires have always been. But they don’t prepare for them and, in many cases, aren’t even aware of how dangerous they can be,” said Carolyn Dawson, an Extension forestry agent based in the Upstate. “Then they’re shocked when a wildfire comes through and destroys their homes. We need to teach homeowners how to adapt to living with wildfire and encourage neighbors to work together and take action now to prevent losses in the future. There are things residents can do, such as reducing wildland fuels and structure ignitability, to protect their homes during a wildfire. Homes that don’t ignite don’t burn.” (source)

It’s very important to know if you live in an area with a high potential for wildfire and if so, to prepare for the possibility.

What can you do to protect your home?

There are numerous things you can do to protect your home from a wildfire if you live in an area prone to them. The US Forest Service is bursting with information about the topic with their FireWise program. Here are some of their suggestions to prepare your home.

The home and the area 0-5’ from the furthest attached exterior point of the home; defined as a non-combustible area.  Science tells us this is the most important zone to take immediate action on as it is the most vulnerable to embers. START WITH THE HOUSE ITSELF then move into the landscaping section of the Immediate Zone.

5-30’ from the furthest exterior point of the home. Landscaping/hardscaping- employing careful landscaping or creating breaks that can help influence and decrease fire behavior

30-100 feet, out to 200 feet. Landscaping – the goal here is not to eliminate fire but to interrupt fire’s path and keep flames smaller and on the ground.

Another thing you can do is proof your roof with a non-flammable material, like asphalt shingles, metal, slate, or tile. That can be incredibly expensive, so another option, although less effective, is treating your existing roof with fire retardant, or install a rooftop sprinkler system

These steps can be the difference between your home burning during a wildfire or being one of the homes left standing.

You need to be ready to evacuate.

Despite the best preparations, there are some cases in which you must evacuate. Wildfires can spread rapidly, especially if they ignite things like propane tanks. In 2015, the small town of Middleburg, California was literally burned off the map when this occurred.

The videos in this article show the horror of evacuating through a wildfire. We lived on the edge of a wildfire more than once in California, but I’ll never forget the first one. Here’s that story if you want to know what it’s like. My former home of El Dorado County, California is currently under threat again, and all my dear friends and former neighbors are in my thoughts.

For evacuation checklists and vehicle emergency kit checklists, you can grab my new PDF, The Prepper’s Book of Lists for $9.49. It contains more than 40 lists to help you get prepped and ready for anything.

You should have a kit in your vehicle at all times for a rapid escape:

Remember, if you live near a forest, you are at risk of a forest fire. It can happen any place that there’s fuel. Be prepared and be safe.