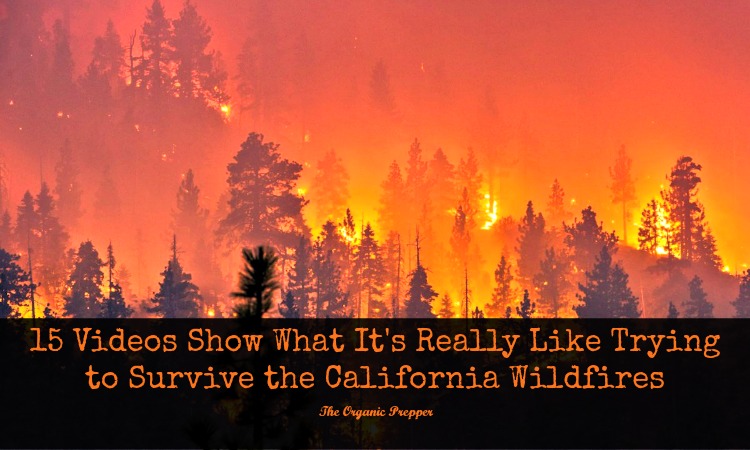 The Northern California wildfires are fast-moving, unpredictable, and for some, unsurvivable. The videos below will show you what it’s really like, trying to survive an ever-changing inferno…and why you shouldn’t wait for the official evacuation order.

A lot of folks have been critical, saying blithely, “They knew there was a fire. They should have evacuated.” It’s important to understand that it doesn’t always work like that with wildfires. Armchair quarterbacking is easy. Fleeing when the car your driving literally catches on fire and the smoke is blinding you is not easy.

First of all, fires move rapidly. You can be in no danger whatsoever and just see a fire on the distant horizon, and then minutes later, it’s at your back door. Secondly, they change courses. Many times, the fire gets ahold of some new fuel – like a home, tall grass, or trees, and the course veers in that direction. Finally, high winds have propelled these fires rapidly and fanned them to new heights. Every fall, California has something called the “Diablo Winds.” These are seasonal gusts that can reach as high as 80 mph and cause extremely high fire danger. When coupled with existing fires, it’s nothing less than the perfect storm. 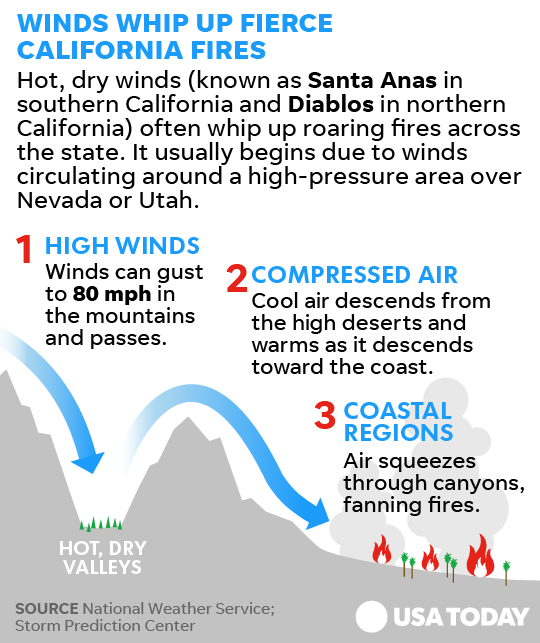 October is often the worst month of the year for wildfires in California. Not only is it the time when the Diablo winds (or Santa Ana winds in Southern California) kick up, but it’s also the driest month. California has a long dry season. It isn’t unusual to go without a single drop of rain from May through the end of October. Because of this, all the lush grass that grows during the spring rainy season is dried, crisp, and tragically perfect fuel.

In situations like this, there is often little to no warning before the fire is roaring through your property. The fire may be miles away and heading in the opposite direction one minute, then turn on a dime. Then suddenly, you find yourself directly in the path of an inferno. If you’re lucky, you escape unscathed with your life but lose all your worldly possessions. Many people have not been lucky.

15 large wildfires are blazing through Northern California’s wine country. 40 people are confirmed dead, hundreds are missing, more than a 100,000 have evacuated, and nearly 6000 homes and businesses have been completely burned to the ground. Thus far, the damage estimate is more than 3 billion dollars.

The following video and stories show you what the Northern California wildfires are really like.

This video is shot from a fire engine from Berkeley, California on the day Santa Rosa burned. It gives you the firefighters’ firsthand view of the destruction and the speed with which it was wrought.

This video shows the utter devastation from the wildfires and includes clips of people escaping with only their lives.

These two roommates left with their dogs as the fire jumped the hill behind their home, narrowly escaping death. (Strong language)

This police officer’s body camera shows the terrifying scene when he was helping people evacuate.

This couple described their escape as being like “driving through hell.”

This video shows multiple clips of people fleeing the blaze as embers rain down and the billowing smoke gets closer. They are trappd on the freeway in slow-moving traffic.

In one tragic story, a family tried to evacuate by car. Their car caught on fire and they had to take off on foot to try and outrun the blaze. They got separated in the smoke. A 14-year-old boy burned to death and the other members of the family are burned over more than half their bodies. The mother and daughter were found by a neighbor and the father was found by paramedics. (source)

In a story with a happier ending, a farmer tried to evacuate his dogs but one refused to go. Odin, a Great Pyrenees, stayed with his herd of goats. The owners were positive they’d never see their beloved dog again, but when they returned to the farm, they discovered a slightly singed Odin with every member of his herd unharmed. This very good boy had even picked up a few baby deer. (source)

Haunting drone footage shows what Santa Rosa looks like after the fire.

While I strongly recommend evacuating in a situation like this, one man stayed behind and managed to save his home and his neighbor’s home from the wildfire.

Along the Napa/Sonoma border, these residents scrambled for safety and barely escaped with their lives. There were fires in all directions, blocking escape routes. People had to choose whether to drive through blinding smoke or flames.

This couple survived a wildfire they couldn’t escape by taking refuge in a neighbor’s swimming pool for SIX hours as the fire blazed all around them.

Another couple who tried to take refuge in a pool was not so fortunate. The woman died in her husband’s arms after 60 years of marriage.

This family’s dog ran away in a panic and they had no option but to leave. They returned home, certain their beloved pup had perished, but then they found this:

These interviews tell the stories of more narrow escapes.

This aerial footage gives you a better idea of what firefighters are dealing with during these widespread blazes.

More than eleven thousand firefighters are pushing themselves to the limits of their endurance to contain these fires, but they aren’t able to directly respond and save people. As the mayor of Calistoga said in a press conference to the few who opted to ignore evacuation orders, “You will NOT be given life safety support at this point. You are on your own.” Exhausted firefighters are grabbing moments of rest when they can.

In some areas, civilians, farmers, and construction crews have taken a stand to protect their homes from the infernos.

The story of the Capell Valley community is one that was repeated in neighborhoods and valleys across Northern California’s wine country this week, as dry conditions and high winds fueled multiple fires in Sonoma, Napa, Yuba and Mendocino counties.

It was not only firefighters who stood in the path of the blazes, but civilians too. Contractors, skilled construction workers and even former wildland firefighters came out of the woodwork to run bulldozers and drive multi-thousand gallon water tenders on twisty and damaged back roads.

They picked up what tools and equipment they could and tried to save their neighborhoods….

This wasn’t the first time Gil Pridmore had fought a fire in those hills. He spent years as the boss of a California Department of Forestry and Fire Protection bulldozer crew and fought the 1981 Atlas Peak Fire.

He used this experience to help lead a team of 30 people to cut multiple layers of firelines on the rim of the valley.

When flames would breach their lines and encroach on houses, the goal was to get the house “in the black,” or completely surrounded by burned areas so there was no fuel left to catch fire. (source)

They managed to save all but one home in the valley.

A few things to learn from the California wildfires

There are lessons to be learned from these videos (and 5 years of living in fire-prone California.) Wildfires happen in other parts of the United States as well, and it’s important to be prepared before the first spark.

You need a fire kit in your vehicle at all times. Things to include:

And here are some tips.

The fires are beginning to be contained, and firefighters say they are gaining an edge. Two out of three of the most destructive fires are more than 50% contained. Some people in Sonoma will be allowed to return to their homes today – or what’s left of them. Winds have lightened, but the weather will still be hot and dry until Thursday when there is a small chance of blessed rain. (source)

I wish those in the affected areas the very best.

Have you ever been affected by a wildfire? We’ve had a couple of close calls. This is the story of our first experience on the edge of a California wildfire. Share your stories – and your advice – in the comments below.

PS: When I read the comments on the videos while researching this article, I was dismayed at the cruelty of people behaving like this doesn’t matter because it’s a state they dislike.  Of all the times to be divisive and scornful, times of tragedy are the most repulsive. Comments like this will be redacted or deleted entirely.