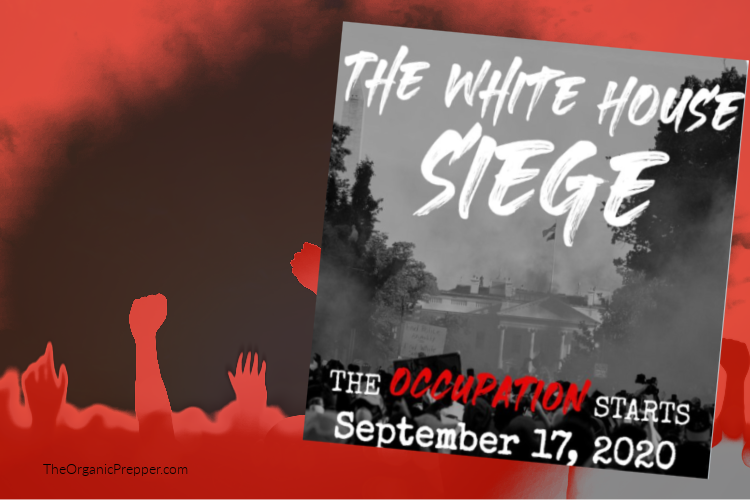 The group that takes credit for the Occupy Wall Street movement of 2011 has a new and even more outrageous plan in mind. They intend to “occupy” the White House.

Adbusters, an online magazine that describes itself as “a global network of artists, activists, writers, pranksters, students, educators and entrepreneurs who want to advance the new social activist movement of the information age” issued a post that they called Tactical Briefing #1 to launch their plans to “lay siege” to the President’s home in Washington, DC. (Emphasis theirs)

It’s been nine years since we set off the political earthquake of #OccupyWallStreet, laying siege to NYC’s Zuccotti Park and inspiring thousands of similar protests around the world.

The Occupy anniversary arrives September 17th, 2020. And it may be the perfect day to trigger another global big-bang moment — a massive collective action of the sweetest kind of disobedience.

The why hardly needs recitation. Because, for these nine years, the shadows have only grown longer. Inequality has soared. Not a single Wall Street CEO spent a night in jail for his role in the 2008 financial meltdown. Politicians and corporate criminals continue to savage the public trust with impunity. And all the while, this howling void of a president, his sins too many to name, sits smugly atop a corona death-toll that may surpass two-hundred thousand Americans by Christmas.

It’s time again for dramatic, decisive action. Which is why, on September 17th, in the original and enduring spirit of Occupy, we and tens of thousands of our fellow citizens will stream into Lafayette Square, in Washington. D.C.

We will lay siege to the White House. And we will sustain it for exactly fifty days. This is the #WhiteHouseSiege.

A siege only works if it is sustained. We witnessed this — the multiplying power of a strategic occupation — nine years ago. You dig in, hold your ground, and the tension accumulates, amplifies, goes global.

Let us once again summon the sweet, revolutionary nonviolence that was our calling card in Zuccotti Park.

#WhiteHouseSiege will electrify the U.S. election season — and it doesn’t stop there. Drawing wind from #MeToo, #BLM, #ExtinctionRebellion, and protests against Trump’s lethal bungling of coronavirus, we’ll inspire a global movement of systemic change — a Global Spring — a cultural heave towards a new world order. (source)

It’s difficult to imagine that this will go down as they hope.

The public “briefing” repeatedly uses the word “non-violent,” but if this goes at all like the occupation in downtown Seattle or the protests in Portland (which has seen violent “protests” for 73 days straight now), violence is bound to occur. And it’s important to note that the law enforcement response to the occupation of anything near the President’s abode will be far more severe than the lackluster response in Seattle, where police officers and National Guard members have been basically neutered by the local government.

An event with the hashtag #WhiteHouseSiege is unlikely to go smoothly and non-violently. This, of course, will likely result in even more violence and more widespread outrage. Twitter is divided, unsurprisingly, on the questionable wisdom of such a move.

On September 17, 2020 we will lay siege to The @WhiteHouse for exactly fifty days.

We need your wisdom and expertise to pull off a radically democratic toneshift in our politics.

Are you ready for #revolution?

The Secret Service does not tolerate “protests” in front of the White House. They’re not the Portland Police and they’re not as kind as DHS. Anyone planning a #WhiteHouseSiege will be shot dead as soon as they cross the barricades.

If Trump is continuously going to bend the will of the people to him by gutting the #USPS & threatening to not leave Office, Desperate times calls for Drastic & Symbolic Measures! Our Democratic Elections are on the line! #WhiteHouseSiege #VoteForOurLiveshttps://t.co/EDYIPRQWl8

How do you think this is going to go over?

Activist groups are better funded and better organized than in recent memory. This event is likely to occur. However, I don’t think it will go over the way Adbusters thinks it will go over. I think that the Secret Service and possibly even the military will rapidly be involved to protect the President.

But it does set the tone for the upcoming presidential election, which up until now has seemed to be on a back burner. Biden’s campaign hasn’t even introduced a running mate yet and the election is a mere 3 months away. This is the least campaigned election year I’ve ever seen.

For those who plan to take part in the #WhiteHouseSiege, I hope that they understand this isn’t going to be a thing where they can stand around with their “comrades” and throw the occasional chunk of concrete. Washington DC is not like Seattle. It’s not like Portland. If they think they’re going to be part of something bigger and just defiantly sleep in a tent in front of the White House, I believe they may be in for an unpleasant shock. Any action taken against the White House will be met with a serious response.

For the rest of us, it’s important to note that this protest and the response to it could spark solidarity protests in other parts of the country. Go here to learn more about preparing for civil unrest.