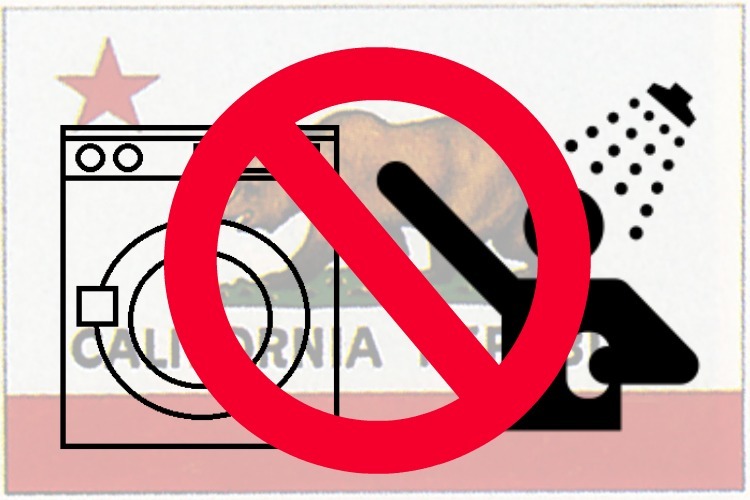 Governor Jerry Brown is retiring but not before he passes a few draconian laws as parting gifts for California. Two bills were signed into law on Thursday of last week to “help California be better prepared for future droughts and the effects of climate change.”

The mandatory water conservation standards will be permanent, according to their wording, and not just for use in times of crisis. To make a long story short, now that these bills are law, it’s effectively illegal to take a shower and do a load of laundry in the same day because you’ll exceed your “ration.” I’ll explain why I say this in a moment.

UPDATE: This article was “debunked” by the arbiters of truth, Politifact and Snopes. Please find my rebuttal to their “debunking” here.

Here’s the wording of the new laws.

Senate Bill 606 establishes a “governing body” to oversee all water suppliers, both private and public and will require extensive paperwork from those utility companies.

Assembly Bill 1668 is where it gets personal.  This establishes limits on indoor water usage for every person in California and the amount allowed will decrease even further over the next 12 years.

If you’re wondering how the government would know how much water your family is using, the utility providers will be obligated to rat you out of face massive fines. And they’re encouraged to spy in all sorts of creative ways. They “shall use satellite imagery, site visits, or other best available technology to develop an accurate estimate of landscaped areas.”

Now, if you’re wondering where I get my assertion that you can’t shower and do laundry on the same day, here’s some math:

If you add together a 17-gallon shower with a 40-gallon load of laundry, you get 57 gallons of water, which exceeds your allotment of 55 gallons. Since this is now a law, breaking it, by definition, is illegal, right?

There are also standards to be established for outdoor use such as landscaping, caring for livestock, and gardening, but those numbers don’t seem to be available at this time. Maybe Californians just get to wait in suspense to see if their chickens are allowed to have water on the same day as their vegetables. Back when I lived in California, we were only “allowed” to water our gardens two times per week, which, in that heat, as you can imagine, didn’t lead to very productive gardens.

Farmers on a larger scale will have to jump through numerous hoops and create water management plans which must then be approved by the people in suits because obviously, they’ll know more about the needs of crops and livestock than the farmers will

Oh, and don’t worry, rich people. There will be “provisions for swimming pools, spas, and other water features.” So you can still have your pretty fountains and pools while the rest of the peons take 2 showers a week. One might wonder if ‘variances” will apply to the wealthy for their landscaping needs.

“The State Water Resources Control Board, which will oversee local agencies’ progress, will also consider possible “variances” for some districts that need additional allowances due to specific local circumstances.” (source)

Both Brown and his most-likely successor, Gavin Newsom, want to spend $17 billion to build a tunnel that will bring water from resource-rich Northern California down to bone-dry Southern California. This means, even the parts of California that DO have water will be restricted in its use.

What if you don’t comply?

If you don’t plan to comply it’s going to be way cheaper to move. Here are the fines Californians will be looking at – and it’s not a typo – these fines are PER DAY.

Who will be billed for these violations?  The utility companies, as several commenters have angrily pointed out. But do you really think that if you are racking up thousand dollar fines that they’re just going to say, “Gosh, I wish you wouldn’t use so much water, Mr. Customer. We’re operating at a dramatic loss. Can you please do better next time?”

No, of course not. Those fines, while they may not be assessed to you directly by the government, will indeed come out of YOUR pocket. To think otherwise is the height of delusion. But hey, if you want to nitpick and act like I’m being ridiculous, go ahead and think that all those fines will just be absorbed by the utility company.

It’s important to note that your usage is only tracked if you have municipal water. If you have a well, at this point, you will probably be okay. Back when I lived there, the idea of metering private wells and billing the owners for use had been floated around, but most people resisted and it wasn’t enforced. If you truck your water in, you can also use as much as you need to.

For years it was illegal to use greywater systems in California, despite the epic droughts. Those regulations have been loosened, however, compliance is still extremely onerous. (Get the details here.) And rainwater catchment is not only legal, it’s encouraged. In fact, there’s a ballot on the table that is a “measure to allow rainwater capture systems to be installed without counting as new construction for the purposes of reassessing property taxes.”

Don’t think this only affects California

Not only are Californians fleeing the state in droves, but there are other ways these restrictive laws can affect the rest of us directly.

It’s important to pay attention to stuff like this and not shrug it off because “I don’t live in California.” In an economy such as ours, we’re all interlinked. A draconian law that gains a footing in one part of the country is much easier to pass in other parts.