WARNING: Your Leafy Greens May Not Be Safe Even Though They Haven’t Been Recalled 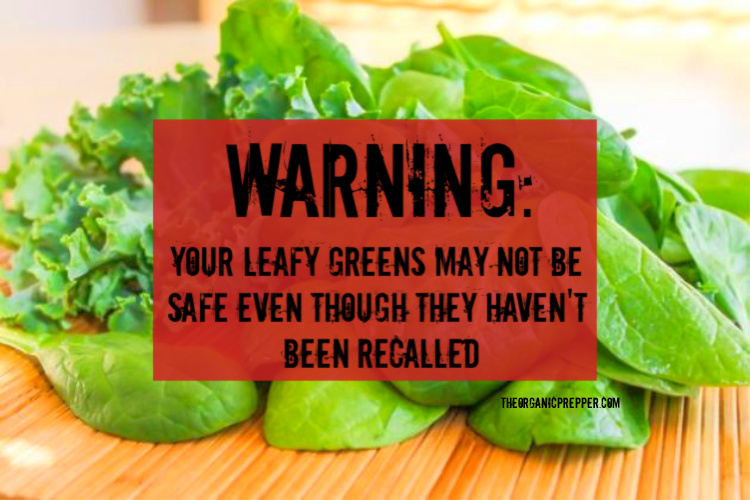 It seems like we are told about yet another hazard in our food supply nearly every week, and unfortunately, this week is no different.

This time, a consumer watchdog group did some random testing and identified a common offender in samples of otherwise healthful food.

Here’s what you need to know about what they discovered.

Listeria was found in samples of leafy greens.

Of the six samples that tested positive, two were packaged, prewashed greens – one spinach, and the other, an organic spinach-spring mix.

“All of the greens were purchased between June 3 and June 19, 2019, in Connecticut, New Jersey, and New York,” according to the organization’s statement.

Officials from CR notified the Food and Drug Administration and the retailers about the test results. According to CR, the FDA has initiated inspections of the implicated production plant.

Earlier this month, we reported that some fresh vegetables sold by stores like Trader Joe’s and Food Lion have been recalled after state inspectors discovered Listeria monocytogenes in a sample. To get the details about that recall – which is ongoing – please click here: More “Healthy” Food Recalled: Multiple Brands of Hummus and Fresh Vegetables

Here are the brands that were found to be contaminated.

One of the contaminated samples had a strain of Listeria monocytogenes genetically linked to at least two cases of listeriosis (the illness caused by listeria) reported to the CDC. That product was a “triple-washed” Nature’s Place Organic Spinach Spring Mix from a Hannaford supermarket. As of the time of this writing, it is not known if that particular product has caused any illnesses.

Here are the other products that tested positive for Listeria monocytogenes, and the stores where they were purchased:

On the bright side, CR did not find certain other bacteria that cause foodborne illness, like Salmonella or E. coli, in any of the 284 samples tested.

Listeria is a type of bacteria found in soil and water and some animals, including poultry and cattle. It can be present in raw milk and foods made from raw milk. It can also live in food processing plants and contaminate a variety of processed meats.

Unlike many other foodborne bacteria, Listeria can continue to grow in cold temperatures – including in the refrigerator. It can multiply rapidly, spreading from one food to another. Listeria can live for years on equipment in places food is prepared, including food processing plants, grocery stores, and delis.

Listeria is killed by cooking foods to the proper temperature (165 degrees F) and pasteurization.

Common sources of Listeria include:

Some research suggests that cold cuts sliced at deli counters are more than five times as likely to be contaminated with listeria than pre-packaged cold cuts, usually because of in-store contamination. However, that does not mean that pre-packaged deli meats and cheeses pose no risk.

Listeria can cause a serious infection in humans called Listeriosis.

Not everyone who is exposed to Listeria gets sick from it – but when they do, it can cause serious illness. Approximately 94 percent of people who develop listeriosis end up in the hospital. Approximately one in five victims who become sick from Listeria die from the infection.

If you believe you have been infected with Listeria, experts recommend seeking medical care and tell the doctor about any contaminated food you may have consumed within the last two months. Listeriosis is usually diagnosed when a bacterial culture grows Listeria from a body tissue or fluid, such as blood, spinal fluid, or the placenta. The infection is treated with antibiotics.

Symptoms of infection depend on the person and the part of the body affected. Listeria can cause fever and diarrhea like other foodborne illnesses, but that type of infection is rarely diagnosed.

Listeria is most likely to sicken pregnant women and their newborns, adults aged 65 or older, and people with weakened immune systems. Other people can be infected with Listeria, but they rarely become seriously ill, according to the CDC:

Listeriosis is usually a mild illness for pregnant women, but it causes severe disease in the fetus or newborn baby. Some people with Listeria infections, most commonly adults 65 years and older and people with weakened immune systems, develop severe infections of the bloodstream (causing sepsis) or brain (causing meningitis or encephalitis). Listeria infections can sometimes affect other parts of the body, including bones, joints, and sites in the chest and abdomen. (source)

Are leafy greens safe to eat?

In the report, CR states that while this study was not large enough to draw conclusions about the safety of specific brands or retailers, it does show that more needs to be done to improve the safety of leafy greens.

“While it may not be surprising to find listeria in a small percentage of leafy green products that are tested, it is always concerning to find bacteria that can make people sick in foods that aren’t meant to be cooked,” says Karen Wong, M.D., medical officer in the Centers for Disease Control and Prevention’s Enteric Diseases Epidemiology Branch.

There is no need to stop eating leafy greens, CR says. They are packed with nutrients and are an important part of a healthful diet. But, it is important to understand the risks – especially for those who are more susceptible to infection with listeria.

Here’s what to do to decrease your risk of infection.

While it may be impossible to fully avoid exposure to contaminants in food (especially if you dine out), there are things you can do to reduce your risk of infection.

Here’s a list of food safety tips from Foodsafety.gov:

In the article Here’s Why There Are SO MANY Food Recalls Lately, Cat Ellis provides additional steps you can take to reduce your risk of becoming ill from foodborne illness:

Gaining more control over where your food comes from can also help keep you safe, Ellis adds:

For people who lack the space or skills to grow their own food and hunt or raise their own meat, check out your local CSA farms and community garden opportunities. Just do an Internet search for “community gardens near me”. If your city or town doesn’t have one, consider starting one.

From here, you will need to preserve your own food. Invest in a quality canner and canning guide, dehydrator and dehydrating book, and/or a freezer. Learn to lacto-ferment your veggies if you are interested in food preservation that doesn’t rely on any power and will be a great source of gut-healing, immune-enhancing gut probiotics.

I know this sounds like a lot of effort. But, these bacteria and the thousands of yearly hospitalizations they cause are no joke. Ultimately, it’s up to you to secure a safe food source. The government certainly isn’t going to do it, and neither is the food industry. (source)

Here’s what to do if you have potentially contaminated food in your home.

If you purchased one of the contaminated products, it is unlikely you still have it in your fridge, since the implicated products were bought last month. But, if you did buy any of them, washing and sanitizing your refrigerator isn’t a bad idea.

In fact, doing that periodically is wise anyway. Listeria can survive for a long time on a variety of surfaces – and it can continue growing in cold temperatures. If Listeria has taken up residence in your fridge, it could contaminate other foods. The CDC recommends doing the following if you had contaminated or recalled food in your home:

Throw out the recalled food and any foods stored with or touching it. Put it in a sealed bag in the garbage. If the recalled food was stored in a reusable container, wash it with hot, soapy water before reusing.

Take the rest of the items out of your refrigerator and put them on a counter or table while you clean. Take out shelving, drawers, and any other removable parts. Don’t leave unrefrigerated food out for more than two hours.

Wash shelving, drawers, and any other removable parts by hand with hot, soapy water. Dry with a clean towel. Don’t run cold glass shelves or drawers under hot water – the glass could crack. Let them come to room temperature first.

Wipe the inside of the empty refrigerator with hot, soapy water, then wipe with clean water to rinse off soap. Dry with a clean towel. Don’t forget to wipe inside the doors and any drawers that cannot be removed.

Wash your hands thoroughly and put everything back in the refrigerator. (source)

Are there things you do to avoid infection with foodborne illnesses like Listeria? Please share your thoughts and ideas in the comments.