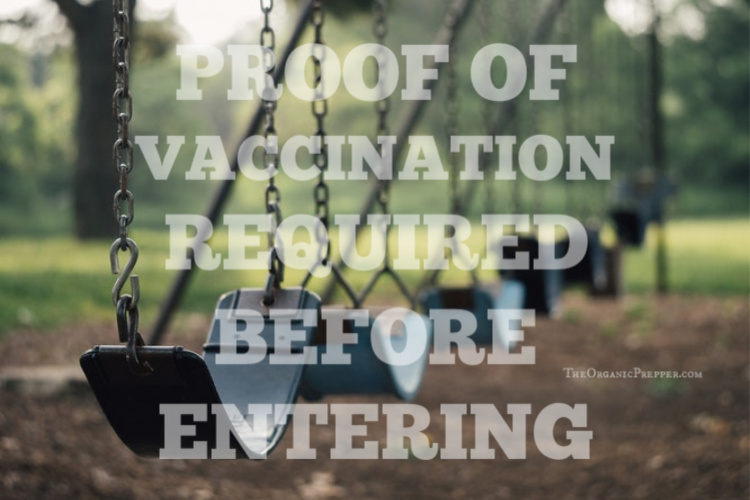 Hysteria over the unvaccinated is reaching unprecedented levels due to an “outbreak” in New York. Officials in Rockland County have declared a state of emergency and have banned unvaccinated children from public places.

The outbreak is now in its 26th week, and the ban, which expires in 30 days, went into effect at midnight on Wednesday. For individual unvaccinated kids, the ban lifts when they get their first measles shot. (Which actually makes them more likely to transmit measles to someone else. More on that in a moment.)

As of the time of this writing, there were 155 confirmed cases, according to the Rockland County government website, which also reports the following vaccination rates for the cases:

Nearly 6,000 children are impacted by the ban.

Anyone younger than 18 who is unvaccinated against the measles is now banned from public places until they receive the measles, mumps, and rubella vaccine. Those who are not able to receive vaccines for documented and confirmed medical reasons are exempt from the ban.

The public spaces include schools, stores, places of worship, and public transit.

According to The New York Times, the outbreak has been largely concentrated in ultra-Orthodox Jewish communities in Rockland, many of which have close ties to Brooklyn areas where there have also been infections.

Rockland authorities seem quite proud to be the first to implement this kind of ban.

At a press conference yesterday, Rockland County Executive Ed Day said, “We believe this to be the first such effort of this kind nationally and the circumstances we face here clearly call for that. Rockland will lead the way in service and safety to the people here.”

Officials there claim they are the first to use “the authority of the law” to help enforce vaccinations in public schools. Like other bad ideas, this one is likely to spread (no pun intended).

Day claims the outbreak began after seven unvaccinated travelers with measles entered the county in early October. During these outbreaks (which occur nearly every year, by the way), the blame is always placed on the unvaccinated, even though research suggests that recently vaccinated people can spread disease. In a report titled The Emerging Risks of Live Virus & Virus Vectored Vaccines:
Vaccine Strain Virus Infection, Shedding & Transmission, Barbara Loe Fisher of the National Vaccine Information Center (NVIC) wrote:

Could my unvaccinated or immune compromised child get sick from coming in contact with a recently vaccinated person?

When it comes to live virus vaccines, the short answer is: Yes.

During a viral infection, live virus is shed in the body fluids of those who are infected for
varying amounts of time and can be transmitted to others.

Vaccine strain live virus is also shed for varying amounts of time in the body fluids of vaccinated people and can be transmitted to others.

Officials disregard the fact that vaccines themselves are risky.

There are currently two vaccines given to prevent measles: MMR and MMRV. Both carry risks, ranging from minor side effects to severe ones (including brain damage). According to an alarming report by the NVIC, the MMR-V vaccine has been noted to have a higher risk of seizures than separate administrations of MMR and varicella vaccines, especially when given as the first dose of the series. There’s another risk associated with MMR-V that is particularly terrifying:

MMR-V vaccine contains albumin, a human blood derivative, and as a result, a theoretical risk of contamination with Creutzfeldt-Jakob disease (CJD) exists. Merck states that no cases of transmission of CJD or other viral diseases have been identified and virus pools, cells, bovine serum, and human albumin used in vaccine manufacturing are all tested to assure the final product is free of potentially harmful agents. (source)

If you are not familiar with CJD and related diseases, you might want to give Can “Zombie Deer” Disease Kill Humans? Research Suggests It ALREADY HAS a read.

The penalties for violating the ban are steep.

Anyone found in violation could face six months in jail and/or a $500 fine, Day told NBC New York. He added that they aren’t looking to arrest people – the steep penalties are designed to “grab the public’s attention.”

However, during the press conference, Day said:

“If you are found to be in violation, your case will be referred to the district attorney’s office. Parents will be held accountable. The focus of this measure is on the parents. We want to urge parents to do the right thing.”

Rockland spokesperson John Lyon told The Verge that the plan is to enforce the ban after the fact “We’re not going to be asking for anyone’s vaccination records on the streets,” he said. “If an epidemiological investigation turns up an unvaccinated minor in, say, a shopping mall, that kid’s parents could be charged with a misdemeanor and face a $500 fine or 90 days in jail.”

How is that going to “turn up” at a shopping mall? Are they going to be randomly swabbing people at Forever 21?

Health officials also said that those who are in violation of the new vaccination law will not be forced to be vaccinated, but that the parents will be made accountable. One has to wonder: How long until they DO start forcing vaccination – in Rockland and elsewhere?

Experts have spoken up about the invasive and disturbing nature of the ban.

Some public health law experts have expressed concern that the county’s order could infringe on civil liberties, reports The New York Times:

He said he is a longtime proponent of making vaccines compulsory for children to attend schools, but questioned whether the order is constitutional.

“This is virtually imprisonment of a child, and certainly significantly restricting the child’s liberty,” Mr. Gostin said. (source)

Earlier this month, The Association of American Physicians and Surgeons presented a letter to a Senate subcommittee that is discussing federal laws that force parents to vaccinate their children.

Here are two excerpts from that letter:

The Association of American Physicians and Surgeons (AAPS) strongly opposes federal interference in medical decisions, including mandated vaccines. After being fully informed of the risks and benefits of a medical procedure, patients have the right to reject or accept that procedure. The regulation of medical practice is a state function, not a federal one. Governmental preemption of patients’ or parents’ decisions about accepting drugs or other medical interventions is a serious intrusion into individual liberty, autonomy, and parental decisions about child-rearing.

AAPS believes that liberty rights are unalienable. Patients and parents have the right to refuse vaccination, although potentially contagious persons can be restricted in their movements (e.g. as with Ebola), as needed to protect others against a clear and present danger. Unvaccinated persons with no exposure to a disease and no evidence of a disease are not a clear or present danger. (source)

Later in the letter, measles is specifically addressed:

Measles is the much-publicized threat used to push for mandates, and is probably the worst threat among the vaccine-preventable illnesses because it is so highly contagious. There are occasional outbreaks, generally starting with an infected individual coming from somewhere outside the U.S. The majority, but by no means all the people who catch the measles have not been vaccinated. Almost all make a full recovery, with robust, life-long immunity. The last measles death in the U.S. occurred in 2015, according to the Centers for Disease Control and Prevention(CDC). Are potential measles complications including death in persons who cannot be vaccinated due to immune deficiency a  justification for revoking the rights of all Americans and establishing a precedent for still greater restrictions on our right to give—or withhold—consent to medical interventions? Clearly not. (source)

No matter what you believe about vaccination, this ban should concern you.

The fact that hysteria is increasing and calls for governments to ban unvaccinated children from being in PUBLIC should concern everyone who cares about personal liberty and true freedom.

Those who consider themselves to be authorities over our personal choices tend to gradually reduce rights until they are eradicated. The media loves a good witch hunt and thrives on creating division among us.

Those of us who are not pro nor anti-vaccination but are pro-informed choice are not immune to attacks on social media, as Daisy Luther showed in the much-needed (but painful to read) article Here’s Exactly How Ugly and Personal the Vaccine Debate Has Become.

What do you think about this ban?

Do you think Rockland officials are right to impose this ban? Do you think other regions will follow suit? Please share your thoughts in the comments.