Untouchable: Government Gives Monsanto the Go-Ahead to Kill You and Your Family 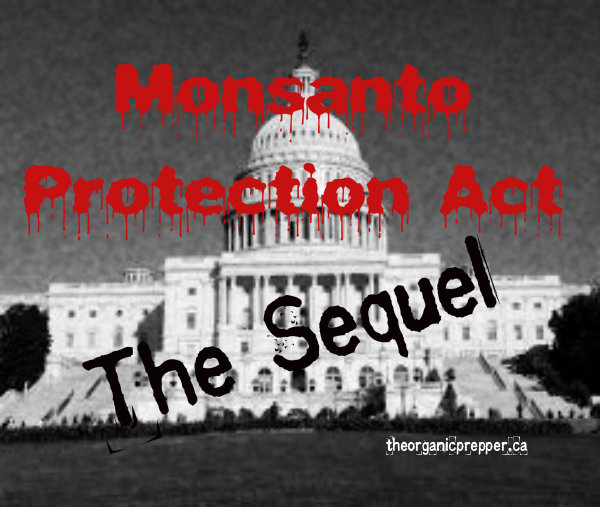 The  FY14 Continuing Resolution (CR) spending bill  is soon to be on the table in the Senate, and hidden in this bill is a continuance of the controversial “Monsanto Protection Act” that was passed 6 months ago (HR 933) amidst enormous public outcry.

It probably won’t come as much of a surprise that the mainstream media is providing disinformation regarding this bill – after all – look at their advertisers. It’s just good business for them to go with the flow on this. According to mainstream sources, this is being presented as a done deal, when in fact, it has only passed the House and must still go before both the Senate and the President.

Of course, last time around that didn’t really help us much – let us not forget those who greedily ignored the wishes of the American people in favor of biotech dollars and influence:

Click HERE to see what members of Congress betrayed us by voting in favor of the original Monsanto Protection Act rider.

Click HERE to learn about Senator Roy Blunt, the recipient of beaucoup biotech dollars who slipped the rider in the last time around.

Click HERE to see how President Obama signed it into law anyway, despite a noisy public outcry.

The new bill surreptitiously passed the vote in the House of Representatives on Tuesday evening of last week.  It exempts the large biotech companies from judicial review and lawsuits in the event that the farming methods or crops cause health or environmental issues, and it also means that once the crops are planted, no matter what is discovered about the effects of those crops, they can still be taken to market and sold.

The Center for Food Safety released the following statement:

“It is extremely disappointing to see the damaging ‘Monsanto Protection Act’ policy rider extended in the House spending bill,” said Colin O’Neil, director of government affairs for Center for Food Safety. “Hundreds of thousands of Americans called their elected officials to voice their frustration and disappointment over the inclusion of ‘Monsanto Protection Act’ this past spring. Its inclusion is a slap in the face to the American public and our justice system.”

Wrapped in a “farmer-friendly” package, the rider represents a serious assault on the fundamental safeguards of our judicial system and would negatively impact farmers, the environment and public health across America.  The rider would strip federal courts of their authority to halt the sale and planting of an illegal, potentially hazardous GE crop and compel USDA to allow continued planting of that same crop upon request.

In addition to being completely unnecessary, the rider represents an unprecedented attack on U.S. judicial review, which is an essential element of U.S. law and provides a critical check on government decisions that may negatively impact human health, the environment or livelihoods. This also raises potential jurisdictional concerns with the Senate Agriculture and Judiciary Committees that merited hearings by the Committees before its consideration.

This time around, the protection rider is even more troubling because of the recent approval of “2nd generation GMOs”.  These virtually untested genetically modified seeds were created to survive the spraying of an even more deadly chemical than glyophosate, the previous poison of choice. Isoxaflutole (IFT) will soon be dousing the breadbasket of America, despite the fact that the EPA KNOWS IT CAUSES CANCER. The EPA’s fact sheet on IFT is nothing short of terrifying – it’s a must-read.

That’s right – it is classified as a “probable human carcinogen” and the EPA has warned that it is likely to contaminate soil, air, and groundwater.  If you live any place downwind or downstream of a GMO farm, you are in the new cancer zone.

And Congress – our duly elected representation – is saying that you have NO LEGAL RECOURSE with this extension of the rider.

Despite the fact that public outcry did nothing to change things the last time around, we need to rally up and contact the offices of our senators. Let them know that you will not support a senator who does not support your health and well-being and chooses instead to offer a free pass to big business.    Be louder this time around – spread the word via this article and any others you can find.  Share this on your social media. Sign petitions. Write letters. Protest.  They may pass it anyway, but we CAN still make others aware of the depth of the corruption and the incestuous relationship between biotech and our government.

You can find contact information for your senators and representatives HERE.

Petitions against this rider can be found HERE and HERE.

It’s time to get involved and let the criminals in the Capitol know that we are watching them.