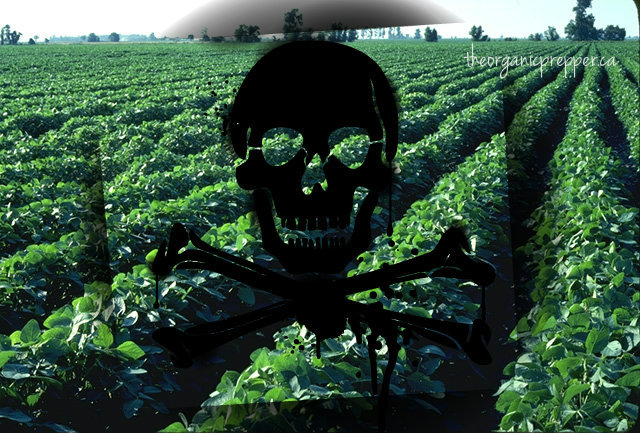 The USDA has just approved a new generation of GMOs for use with more deadly herbicides than the toxic glyphosate that currently taints farms across America.

You won’t hear about this on the mainstream though – it was all done very quietly in the hopes that no one would notice.

Bayer has developed a soybean that can withstand applications of the toxin isoxaflutole (IFT).

IFT is classified as a probable human carcinogen.

That’s right – they KNOW that it causes cancer and they created a plant with which they can use it anyway.  A plant that is meant to feed us or feed our livestock.  They’re going to douse the fields with it and allow it to leach into groundwater and contaminate soil.

The EPA knows this.  Read the data sheet about this – you won’t believe your eyes when you see the assessment of this chemical that will soon be sprayed all over fields across America.

Based upon a battery of acute toxicity studies, Balance Herbicide is classified as Toxicity Category III. Isoxaflutole demonstrates developmental toxicity and has been classified as a Group B2 carcinogen (probable human carcinogen). The data available at this time indicate that isoxaflutole is very phytotoxic. Isoxaflutole is persistent and mobile, and may leach and accumulate in  groundwater and through surface water. (source)

They KNOW and they are allowing it anyway.

Since glyphosate wasn’t ruining the world fast enough, Bayer decided to up the ante.  Herbicide tolerant weeds have adapted to the pesticide and now to continue growing the GMO scourge, more toxic methods have to be used.

“Bayer’s new GE soybeans represent the next wave in agricultural biotechnology—crops that dramatically increase farmers’ use of and dependence on toxic herbicides,” said Bill Freese, science policy analyst at Center for Food Safety.

Dubbed FG72, these GE soybeans were developed by Bayer CropScience, the second-largest agrichemicals firm in the world.

The EPA has designated IFT as a “probable human carcinogen” based on animal tests in which it triggered liver and thyroid tumors in rats. IFT and its major breakdown product persist in surface waters, and despite its limited use, at present is frequently detected in tests. It is also toxic to aquatic organisms, wild plants and important crops (e.g. vegetables.). IFT is so toxic that three states—Wisconsin, Michigan and Minnesota—rejected the Bayer-EPA label for this herbicide as insufficiently protective of human health, the environment and neighboring crops.

First generation GE crops, like Monsanto’s Roundup Ready (RR) varieties, are resistant to the herbicide glyphosate. Skyrocketing use of glyphosate with RR crops has wiped out biological diversity in our fields, for instance nearly wiping out milkweed and thereby contributing to a dramatic decline in Monarch butterfly populations. Glyphosate use has also triggered an epidemic of glyphosate-resistant weeds that now infest roughly half of farmers’ fields.

“Bayer and other biotech companies are now poised to introduce a host of ‘next-generation’ GE crops resistant to more toxic herbicides as a false ‘solution’ to massive weed resistance,” said Freese. “But their effect will be to generate still more intractable weeds resistant to multiple herbicides.” (source)

The EPA and the USDA are supposed to be our safety net – they are supposed to be agencies of protection. Instead, they allow the big biotech companies to set their own rules and policies.  There is absolutely no excuse for approving the use of a toxin that is a probable human carcinogen and yet the agencies established to protect  us did it anyway.

We are already in the midst of a cancer epidemic in this country. Nearly half of the population will deal with cancer at some point in their lives.

The President’s Cancer Panel, a three-person panel that reports to the U.S. president on the National Cancer Program calculated that 41% of Americans will be diagnosed with cancer during their lifetimes.  If you’re male, the chances are 1 in 2 that you will be diagnosed with some type of cancer, and women have a 1 in 3 chance of the dreaded diagnosis.

A Global Cancer Statistics for 2011 study names cancer as the #1 killer in the western world and #2 in developing countries. (source)

With this new USDA approval, I’d say the odds of getting cancer just got a whole lot higher.

No longer is just avoiding GMOs and eating organic enough.  Our water supply is tainted. Our land is contaminated.  Even the air we breathe is subject to pesticide drift.  You need only to look at the petri dish that is the Hawaiin island of Molokai to see what happens to a population that is subjected to these types of farming techniques and that occurred with the LESS TOXIC glyphosate. (“Less toxic glyphosate” are words I never thought I would type!)

Do you still think I’m overreacting about GMOs?  Only through the development of genetically modified plants that can withstand these deadly poisons would the probable human carcinogens be able to be used.

IFT is a chemical weapon and the fields of America are the warzones.