Trudeau “Temporarily” Declares a State of War Against Canadian Protesters 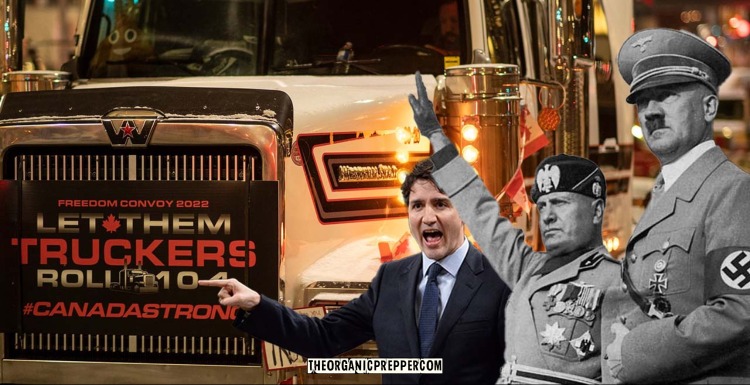 Justin Trudeau has just declared a state of war in Canada. Those who refuse to bend to Trudeau’s unlawful and tyrannical decrees have just been declared terrorists, as Trudeau has essentially plunged Canada into a state of martial law after pushing through Canada’s Emergencies Act.

"If your truck is being used in these illegal blockades, your corporate accounts will be frozen, the insurance on your vehicle will be suspended." pic.twitter.com/iv1K8VDhAL

This act virtually plunges Canada into a dictatorship without law of any kind. Canada is now ruled by whim and decree.

Canadian military/police forces will now be able to steal property, restrict movement, and detain anybody who violates any new orders from Trudeau. According to Trudeau, this is only a “temporary” measure.

You will own nothing. And you will be happy.

After the Canadian Freedom Convoy – a collection of unarmed, innocent Canadian citizens clamoring for their freedom – set up shop on Ambassador Bridge between Canada and the US, Trudeau sent in men with automatic rifles. These men proceeded to begin to arrest those whom they have sworn to serve and protect.

It seems the mass resignation from the world’s police forces after the Defund the Police movement has only left those behind who are willing to enforce illegal and immoral orders.

Unreal scenes in Canada as heavily armed forces move in to make arrests and tow all vehicles from ambassador bridge. pic.twitter.com/zwI6Oa2ufR

Contributing funds to The Freedom Convoy is now illegal.

Anybody contributing funds in any way to The Canadian Freedom Convoy will now have their bank accounts frozen and considered a terrorist. They will not be able to purchase food, pay their electric bill (in the Canadian winter), or buy medicine. The move from a cash system to a digital system has made this possible.

In the future, anybody who contributes money to organizations Ottawa does not approve of have the potential to now be deemed terrorists as well. It doesn’t matter if you gave money to support free speech, religious freedom, bodily autonomy – if what you financially support is in opposition to what Ottawa supports, you are now at risk.

All those who contributed money to The Canadian Freedom Convoy through alternative means, ever since GoFundMe tried to rob the Convoy, has had their information leaked.Whether this is the result of communist, lone-wolf hackers or from Canadian government operatives is unclear.

You can see the message the hackers left behind on the GiveSendGo website (where Convoy supporters had turned after the GoFundMe fiasco) below:

This information will now be used to round up those donors at their homes for indefinite imprisonment or so that they can be targeted for violent assault by communist brown shirts. This is a coordinated attack against the patriots of Canada and freedom lovers of the world.

Coincidentally, on February 13, a truck filled with 2000 rifles was stolen in Toronto. Make of that what you will. Was it a random criminal event, or are there communist on-the-street forces within Canada that are gearing up?

(For information on how to starve the beast, make sure you check out our free QUICKSTART Guide.)

Emergency protests have since been called for at all Canadian consulates throughout the world. Americans are standing in solidarity with the freedom fighters in Canada, and the very same day that Trudeau made his announcement, the Convoy to Save America, a collection of American truckers, drove up to the border to deliver fuel, food, clothing, and blankets to the Canadian protestors. 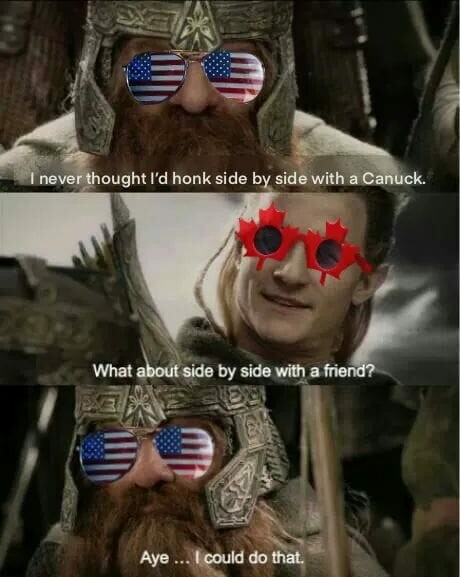 In response to the terrorism charges against those who support the Freedom Convoy, Canadians are now floating the idea of a nation-wide bank run, where everybody pulls all of their money out of their banks. The hashtag “#bankruncanada” is currently trending on Twitter.

Canada is currently at a very vital and very dangerous crossing point.

I would argue that they are potentially on the brink of a civil war. It is difficult to see this doing anything but escalating. Should Canadians back down, they will willfully be letting their children and countrymen succumb to further tyrannical decrees. Should Canadians continue to stand where they are at, Trudeau is going to send ever-larger amounts of force against them.

This may not just be badged forces being sent against Canadians either. True terrorist actions against Canadians are likely to follow. The only reason that one doxxes another is with the hopes that somebody will beget an act of violence against the doxxed. Seeing that all who contributed money to The Freedom Convoy have now effectively been doxxed, I believe this is only a matter of time.

If it’s not uniforms who will be showing up to Canadian homes in the near future, it will be those entirely clad in black clothing.

It needs to be pointed out as well though, that the uniforms will come. When a totalitarian attempts to rule by totalitarianism, his very mandates necessitate that there be increasing amounts of force used against those who refuse to bend the knee. History has shown us this time and time again. Cuba did it, Germany did it, Italy did it, Russia did it, Venezuela did it, China did it, and Vietnam did it. It will happen in Canada as well. They are not the exception to the rule.

…may I leave you with the following video:

What has become of Canada? Was this something any of us could have anticipated? What are your thoughts? Where will this go? Do you foresee a similar protest and response in the US? Let us know what you’re thinking in the comments section below.

On the same day the BBC airs a program about #riseofthenazis, Canada's Trudeau starts his country on the path to fascism, funny coincidence Canada and Nazi Germany were/are SOCIALISTS 🤔 pic.twitter.com/FfVcuuLSYE