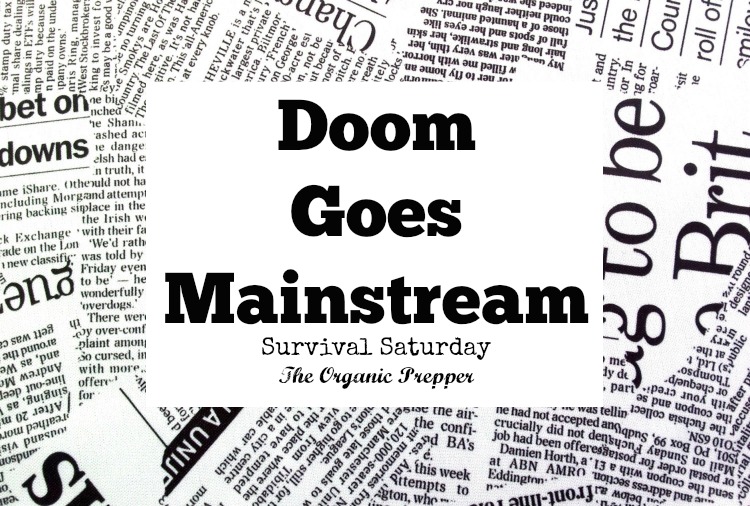 This week, we experienced that uncomfortable moment when Forbes published Doomsday Maps. Multiple ones.

Case in point, this article from Forbes entitled “The Shocking Doomsday Maps of the World and Billionaire Escape Plans.”

The article outlines the results of a dramatic pole shift, either due to volcanic and seismic activity, nuclear war, or an asteroid strike. While NASA says the whole theory is hooey, billionaires are buying up property far away from coastlines and at higher elevations like it’s going out of style.

Go here to check out the Doomsday maps for every continent on the globe. Would you be safe in your current location? And does the fact that it’s published on a mainstream website mean we should start stocking the bunkers?

As Mac Slavo of SHTFplan wrote, “They may have information that we don’t.”

It looks like governments everywhere hate it when citizens are publicly more efficient than they are.

There is a park in Toronto, Ontario that needed a staircase so that people could safely descend a hillside to get to the community gardens below. The city quoted the astronomical sum of $150,000 taxpayer dollars to build the staircase.

An elderly resident decided he could build the staircase himself, and he did, for the princely amount of …$550.

Adi Astl, a retired mechanic, built the staircase in one day with the aid of a homeless fellow he hired.  Everyone was thrilled.

Everyone but the Toronto government, that is.

Some Yahoo (I suspect the Yahoo is the source of all these pictures on Twitter) allegedly called and complained about the “unsafe” steps and they were torn out. Because, you know, letting people just fall down a hill is way better and it’s a whole lot easier to complain about something than to create something.

Your tax dollars at work, Torontonians. Get the full story here, along with the whiny Twitter complaints.

AG Jeff Sessions can now legally steal more money from US citizens than ever.

I have complained about the loathsome attorney general since the day his name was first mentioned, and as it turns out, I wasn’t wrong. (This article perfectly sums up why I detest everything he stands for.)

This week, a horrifying expansion of civil asset forfeiture laws occurred. If you aren’t familiar with those laws, it means that the police can relieve you of your property without any due process of law. All they have to do is suspect you of a crime and your stuff becomes their stuff. Then, they get to keep it as “profit.”

Even if you’re cleared of all wrongdoing, you don’t always get your stuff back. Here’s an article that explains how civil asset seizure works. Spoiler: You’re not going to like it.

Anyhow, our illustrious attorney general loves the seizure of assets as much as he hates marijuana and under his reign, the laws have just been expanded, allowing the government to run amok and take our stuff. As Zero Hedge points out, “the police are now taking more assets than the criminals.”

…the U.S. Justice Department announced on Wednesday that the federal government will reinstate a program that helps local and state law enforcement seize cash and other assets they suspect have been earned from crimes.

Local police will now be able to seize cash, often from those suspected of drug crimes, even in states that do not condone the policy.

Deputy Attorney General Rod Rosenstein told reporters that most seizures were warranted because the “vast majority” of people who have property taken by police do not contest it in court.

The Obama administration had rolled back the policy in 2015, saying it incentivized police to take money from people who had committed crimes.

Since former U.S. Attorney General Eric Holder weighed in on the issue in 2015, Justice Department agencies like the Drug Enforcement Administration has been barred from rewarding local police for taking possessions from people they stop.

Now, the federal government will again be able to return up to 80 percent of the assets seized to local law enforcement.

The Police State’s tentacles just reached a little further into your ‘pocketbook’ as what has become known as “policing for profit,” goes nationwide.. by federal law! (source)

I never thought I’d side with Obama and Holder on anything, but here I am, killin’ it.

This week, President Trump threw some shade at AG Sessions, who showed a distinct lack of loyalty when he recused himself from the Russia investigation. Let’s hope that horrid little man is on his way out.

This week, I wrote about some health issues that I’ve been dealing with for a few years now. A topic I’ll be writing about soon is preparedness for those with chronic illnesses and disabilities. We all deserve to be prepped, regardless of the state of our health.

How is your summer garden going? My veggies got a late start, but they’re like a jungle out in my back yard and I’m getting a nice harvest each day. If you’re having one of the same abundance issues that we are, this article may help.

You may want to start thinking about how you’ll preserve all the summer goodness. Even if you don’t garden yourself, this is prime time to hit the farmer’s markets. Let me recommend canning. My newly released canning book has loads of recipes and information to help you load your shelves in no time at all.

PS: If you already have the book and you enjoyed it, good reviews are invaluable to authors. 🙂

It’s just about time to start your seedlings for your fall garden, depending on the agricultural zone in which you reside. Here are some articles on this topic.

Let me know how this year’s gardening and preserving is going in the comments below!