What Could Possibly Go Wrong When Millions of “Lab-Made” Mosquitos Are Released in Fresno? 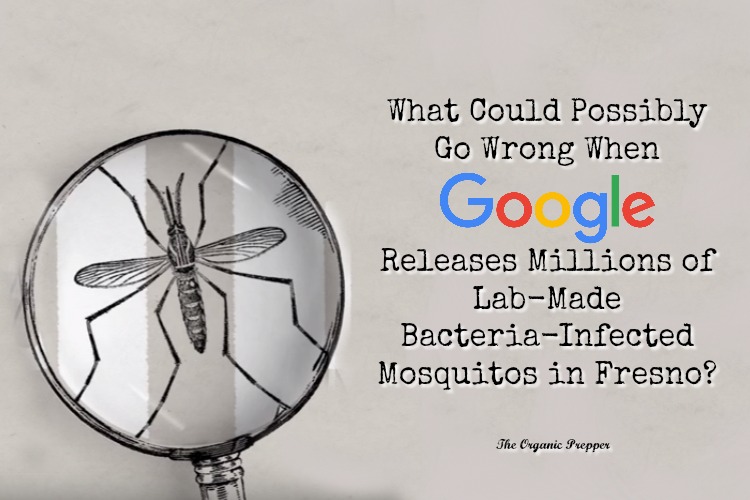 Sometimes you have to think that scientists don’t ever read science fiction, and thus have not even contemplated all the things that could go wrong when they do something like creating 20 million mosquitos in a laboratory, infecting them with a bacteria, and then releasing those mosquitos in Fresno, California.

First of all, did you even know that Google had a bio-lab?  They do and it’s called Verily. Which, I dunno, sounds rather biblical. “Verily, I say unto you…we are the purveyors of all that is The Truth.”

Verily plans to create 20 million mosquitoes and infect them with a bacteria in their laboratories. Then, the mosquitos will be released on the unsuspecting populace of Fresno, California, a city with over half a million people.

Remember last year’s Zika scare that prompted the government to spray harmful chemicals all over citizens in Florida? That terrified a whole bunch of pregnant women and made them worry that their babies would be born with microcephaly?

Apparently, the Aedes aegypti mosquito that is thought to carry the Zika virus is prevalent in Fresno. However prevalent these mosquitos may be, there is only one confirmed case of Zika, and this woman’s partner had been traveling.

So, anyway, in a project wittily named DeBug, Verily has “created” a whole bunch of mosquitos and infected the males with a bacteria called Wolbachia. When the male mate with female mosquitos, the resulting eggs can’t hatch. And by the way, they did a smaller release of franken-mosquitos last year in Fresno. (See? says Verily soothingly. We already did this once without you knowing about it and nothing bad happened. Don’t worry, you silly mortal.)

In 2016, CMAD and MosquitoMate piloted the first-ever U.S. release of male Aedes aegypti mosquitoes with Wolbachia in Fresno County. Our 2017 collaboration represents a more than 25x increase in the release efforts, with a total of one million non-biting sterile male mosquitoes released weekly, made possible by the automated mass rearing and sex-sorting processes developed at Verily. Additionally, our software algorithms and on-the-ground release devices will allow us to distribute the sterile male mosquitoes in an even and targeted way throughout Fresno’s mosquito season. We believe that these advancements could have a meaningful impact on what is traditionally a very labor-intensive process and could reduce the number of biting Aedes aegypti in Fresno County.

Theoretically, the Wolbachia virus is harmless to humans, male mosquitos don’t bite, and whether Fresno residents like it or not, they’ll be subject to the release of a million of these franken-mosquitoes per week for the next 20 weeks.

The project, which has already rather quietly begun, is turning the area into a test facility without the consent of residents. Trucks will be driving through the city releasing swarms of millions of infected male mosquitos in Fresno.

For the Debug team at Verily, moving our work from the laboratory to the field is not only an important milestone for our group of biologists, engineers, and automation experts, but it’s also a critical step in bringing our long-term vision to reality. Field studies allow us to test our discoveries and technologies in challenging, real-world conditions and collect the necessary evidence to bring them to a broader scale. We hope to demonstrate success with Debug Fresno that will benefit the local communities working with us on this study and later other communities globally where Zika, dengue, and chikungunya are endemic. We are excited to take the first step in that journey today by bringing these technologies to the field. (source)

Here’s some more information about the project in this informational video.

Does anyone else think that this sounds like the first chapter in a novel by the likes of Michael Crichton or Stephen King? (For information about protecting yourself from mosquitos that doesn’t include the potential for some kind of mosquito apocalypse, read this.)

I can see quite a lot of potential unfavorable variables here. Just off the top of my head, here are just some of the things that could go wrong:

It’s like they don’t even consider these things. Or, if they do, then the risks are worth taking. Maybe this will be harmless, but the fact remains that this city is being turned into a “controlled environment” for Verily without the consent of citizens.

And that is not okay.