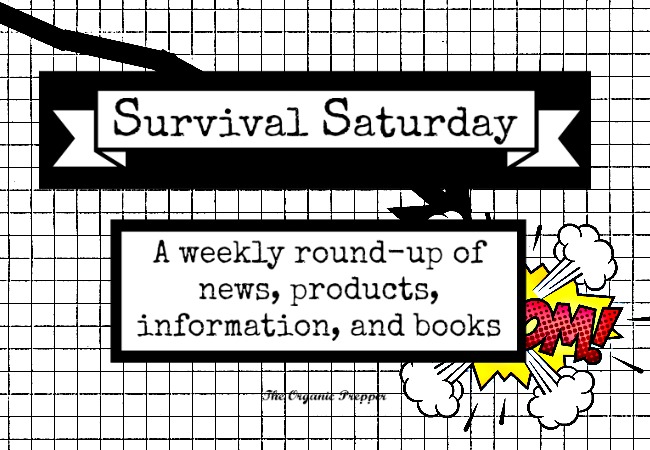 Survival Saturday is  a round-up of products, the week’s news, and recommended reading material for folks who are interested in being prepared. The news this week was NOT of the “good” variety, so, please, focus on getting prepared right now. If you’ve been waiting for a sign or until disaster is closer, we’re pretty much there unless the Fed figures out a way to artificially kick the can just a wee bit further down the road.

This week, the products I’m recommending are a checklist of the items you must to have on hand. Hopefully, you’re already prepared with these items. If not, get them now.

This Week in Preparedness

Turns out, the President lied.  It seems like the Universe was determined to prove wrong everything that President Obama said in his State of the Union address. (Stream it free if you missed it.) The thing that I noticed this time around was that it was more bread and circus-y than usual, complete for the first time with a preshow that included a Hollywood emcee and musical entertainment. Not kidding even a little bit. It was so much like the Superbowl of Politics that I expected hopey-changey cheerleaders to cartwheel across the stage. While the President accused those of saying there were problems with the economy of “peddling fiction,” this week we watched our country slide right to the edge of the cliff, like one of those slow-motion dreams in which you see disaster is about to strike but your feet are encased in concrete and you can’t move fast enough to stop it. See the summing up of the financial catastrophe in charts, here.

Trillions were lost in the global economy this week. On Friday, the Fed waited until the market had already closed to announce the lowest Quarter 4 GDP numbers in…well, forever.  Oil prices have plummeted, which seems like a good thing, but it’s so not a good thing. (Learn how bad it really is when oil drops in price here.) Howard Silverblatt, senior index analyst at S&P Dow Jones Indices said that …wait…sit down….nearly $3.2 trillion has been wiped off the value of stocks around the world since January 1, 2016. And it’s only the 16th, folks. Bottom line? Get your preps in order because we are on the edge of a recession that could make 2008 look like child’s play. If our government was on the ball, they’d be telling you the same thing, firing up the printers to promote self-reliance as patriotism like they did after WWII.

Wal-mart is closing hundreds of stores and canning 16,000 people. Retail giant Wal-mart ceded defeat after a year in which they watched stock values plummet an almost unfathomable $80 billion. They have announced the closure of 269 stores across the globe, a move that will put more than 16,ooo people out of work, with the majority of those workers right here in the good ole USA. The stores will close in the next two weeks – check out the list of closures and see if the store near you is going out of business.

Canada and China are feeling the pain, too. The Canadian dollar has dropped in value, leaving citizens paying dramatically higher prices for any type of imported goods. One expert in the UK has predicted that China’s financial pain could cause markets around the world to crash by a heart-stopping 75%.  As China’s stock market crashes, ours seems to be following with panic selling, and even the Wall Street Journal admits it, calling Friday’s close a “rout”.

Asylum seekers are systematically raping European women. From the politically-incorrect news files, rape is just a game to many of the Muslim male refugees recently welcomed to Europe. Remember the assaults in Cologne, Germany on New Year’s Eve? Well, it turns out that’s just a drop in the bucket of what has been happening to European women since the doors were flung open to accept refugees that have a different perspective on what acceptable behavior entails. In fact, more than one swimming pool in Germany has had to add security and even ban asylum-seekers from the premises because they refuse to stop sexually harassing women there. Learn the unsettling details, and get prepared because Obama has already promised admission into our country to thousands of refugees of the same ilk.

That’s not the only thing the media is covering up about the European invasion of Syrian refugees. This hotel bouncer gives an eyewitness report of what went on that fateful New Year’s Eve – and it wasn’t just mass rape, as if that weren’t bad enough. He quotes the police as calling the chaos “a civil war-like situation” in which the immigrants were shooting at police. Where was the news coverage of THIS?

The Michigan Poisonous Water Crisis intensifies. If you haven’t heard, the water in Flint, Michigan is highly corrosive, causing lead and pathogens to leach into the municipal supply, which in turn is poisoning everyone who drinks it. Local residents have suffered from skin rashes, lead poisoning, and even an increase in Legionairre’s disease due to the contamination that they hid from people. Apparently, the EPA has known about this since last April, and both they and the state government failed to warn Flint residents. Finally, Governor Snyder warned people and apologized, but it is too little, too late for his constituents who are seeking both civil and criminal charges against Snyder. It gets even better (sarcasm). Only in Flint would the water company send out overdue notices for poisoned water. Shockingly, 60% of the residents are overdue in their payments for poisoned water. Huh. 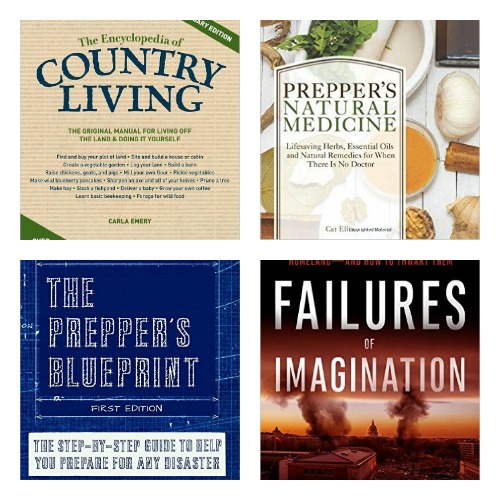 Holy cow. This week. Are you prepared for an impending economic collapse? If not, you need to focus on becoming more self-reliant this week. It’s no longer something you can put off, friends. As a bonus, the last book is just a really good read.

The Encyclopedia of Country Living

This compendium is a decades-old resource that guides you through everything you need to know about self-reliance. From gardening to raising animals to butchering to food preservation, if you need to know it, it is in this book. This book is a must-have for any prepper, whether you live in the city or the country.  There’s only so much food you can stockpile, and producing it yourself absolutely must be part of your plan.

Prepper’s Natural Medicine: Life-Saving Herbs, Essential Oils and Natural Remedies for When There is No Doctor

When finances are tight, we tend to avoid things like going to the doctor. This book is loaded with safe, effective, and tested remedies that you can use to treat yourself if you find yourself in a situation in which professional medical care is not an option. The author is a long-time herbal practitioner and her advice is expert, easy-to-follow, and perfect for preppers. Get this book, then make a list of what you can grow and what you need to acquire.

This is the comprehensive guide to all things preparedness. Whether you’ve been at it for a while, or you are brand new, this book will take you by the hand and guide you through the steps of basic preparedness all the way through to self-reliance. This is always the book that I recommend to anyone looking for a book that covers everything.

I just received this book on Thursday, and holy snappin’ pussycats. This is the scariest read on the planet. If you want to move your prepper mojo and imagination into high gear by wondering, “What if…” this will give you some nightmare scenarios that you never even considered before. The book is written by Congressman Michael McCaul, the sitting chairman of the Homeland Security Committee, “who receives daily intelligence about threats materializing against America, depicts in real time the hazards that are closer than we realize.  From cyber-warriors who can cripple the Eastern seaboard to radicalized Americans in league with Islamic jihadists to invisible biological warfare, many of the most pressing dangers are the ones we’ve heard about the least—and are doing the least about.”  Wow.  Once you read this book, you will look at everything differently.

Do you have any news links you want to share? Now’s the time! You are absolutely welcome to post your links in the comments below. (And this feature will be so much cooler if you guys post the things that you found important this week!)