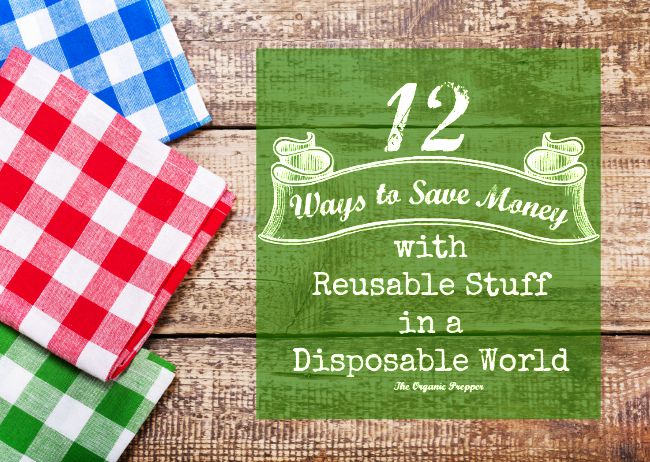 We live in a convenience-driven society. Fast food businesses thrive while home cooking flounders. Trips to the pharmacy can now be undertaken without getting out of your car, using the handy drive-through. Standard cleaning products are quickly being overtaken by disposable items you toss in the trash after one use. We’ve been brainwashed by the marketing companies to believe that the simplest things are wildly inconvenient, and that in our time-crunched society we must pay for shortcuts.

All of this convenience has a high price tag. Not only are you spending money unnecessarily at the check-out counter for all of that convenience, but the planet is getting buried under mountains of rubbish. The average American produces 1600 pounds of garbage per year.

Did you ever stop to think about how many disposable things you buy? We do our shopping monthly instead of weekly, and this makes it a lot more noticeable on our bill when we load up with things that will be thrown out. I just checked the price, and a 6 pack of good quality paper towels would add about $8 to my bill. If you’re in a position in which every penny counts, that $8 could be buying you a necessity like food. Even if you have no concern about the landfills, you probably want to save money, right? Pennies each week add up to dollars each month, and hundreds of dollars over the course of a year.

From a preparedness point of view, having items that don’t have to be replaced on a weekly basis only makes sense. If you are unable to go to the store for a long period of time due to a personal financial crisis or some other type of upheaval, you won’t have to worry about running out of paper towels or diapers if you don’t use them. On the other hand, for power outages, I do stock a stash of some convenience items to make my life easier, since we also have no running water during those times. However, they’re for emergency use only, and are rarely pulled out of the stockpile.

A dozen things you’ll never have to buy again

It probably goes without saying that if you’re on a strict budget, you should not be buying silly things like cleaning wipes for the counters, paper plates, disposable dusters, and, for crying out loud, disposable toilet brushes. However, there are lots of other conveniences that can be just as easily replaced with reusable items.

Here are 12 things that you don’t need to spend money on during your regular shopping trips.   Once you make the initial purchase, you won’t need to replace these items for a very long time. Trust me, you won’t even miss the throwaway version once you get used to the higher quality reusable products.

When every penny counts, don’t throw away money

If your budget is tight like mine, every penny counts. Be sure to spend your money wisely by investing in reusable items, making the ones you can, and hitting the thrift stores to channel our frugal grannies.

What reusable products do you use in your household in place of disposable ones? Please share in the comments below so that we can revisit this topic in a second article!