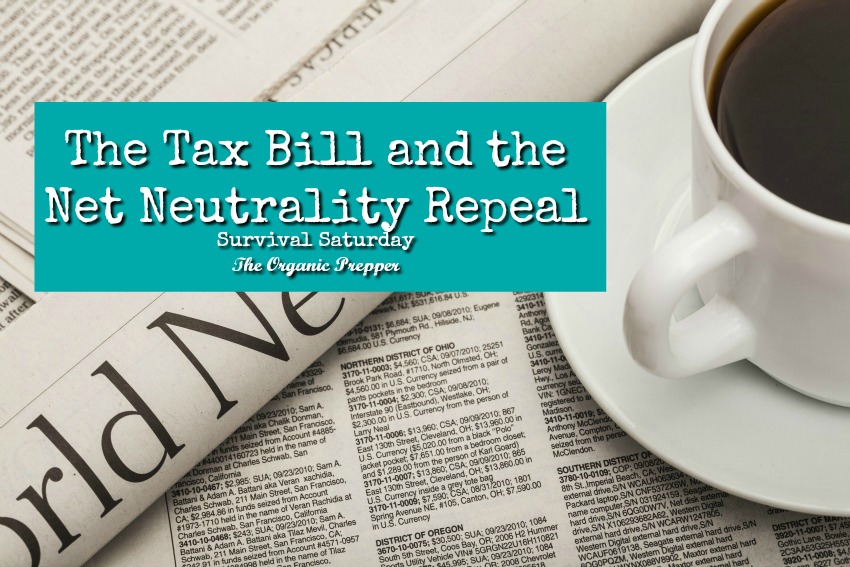 This was a confusing week for most people. The media is telling a lot of dramatic stories about the new tax bill and the repeal of Net Neutrality, but what is the truth?

There is more than one side to these stories, and today on Survival Saturday, we’ll take a closer look at both.

Is this the end of the Internet?

The repeal of Net Neutrality has caused more hysteria than the institution of indefinite detention. Which is pretty mindblowing if you think about it.

I’ll be honest. I don’t completely understand this but here are a few thoughts:

I am really unconvinced that this is the end of the internet. And you know me. I’m all about the doom.

But opinions differ. Here are some opinions from reputable sources. Read them over and keep in mind that NONE of us has the full story.

It’s rare that I don’t have a firm opinion but on this one, although I lean to the repeal as being a good thing, I feel like there are a lot of smoke and mirrors and that no one actually knows what the heck is going on.

Is the new tax bill good or bad?

First of all, it’s more than a thousand pages, so it’s a safe bet that no one has actually read the whole thing. I really think that this is a terrible practice and is the reason a lot of bills get passed that never would if members of Congress were forced to vote openly on them.

Here’s a quick summary of the bill.

Michael Snyder says that it WILL reduce tax bills for most of us, but not by enough to really make it noticeable. The Washington Examiner breaks it down into easy-to-grasp numbers:

In 2019 the middle-income quintile (or one-fifth) of U.S. households would receive an average tax cut of $840, while the top quintile would receive $5,420. At first blush, the top group seems to do better.

However, the top group currently pays far more in income and estate taxes, so its relative cut would be smaller. The tax cut for the top quintile would be 8 percent of current taxes, while the cut for the middle quintile would be a huge 23 percent. The Senate bill trims the top income tax rate and the rate on small businesses, but it cuts rates, doubles the standard deduction, and increases child credits for the middle class.

Let’s look at other TPC data. The Senate bill would give 62 percent of the overall tax cut to the top quintile in 2019. But that group pays 84 percent of individual income taxes and 67 percent of all federal taxes. Since the tax cut percentage for that group is smaller, it would pay a larger share of overall federal taxes going forward.

What about the middle quintile? It currently pays 10 percent of all federal taxes, but would receive 13.5 percent of the Senate bill’s tax cuts in 2019. Thus, middle earners would gain an extra-large share of the tax cuts.

As for lower-income households, they would receive a subsidy increase. Currently, the bottom two quintiles of households do not pay any federal income taxes on net. Yet those groups would receive substantial tax “cuts,” which would be largely an increase in refundable tax credits. (source)

So, really, it depends on how much money your family makes whether this bill will help you or hinder you. This bill has been passed by the House and will be voted on by the Senate this coming week, where it appears that it will pass. Further reading:

Taxation is legalized theft anyway, so the only tax bill I could get behind is one that eradicated it. Trust me, there’d still be roads.

Be sure to check out Preppers Daily News for all the most important links, every day.

PS: Time is running out to get your free copy of my book, Have Yourself a Thrifty Little Christmas and a Debt-Free New Year as a gift for signing up for my email list. Go here to get your book.