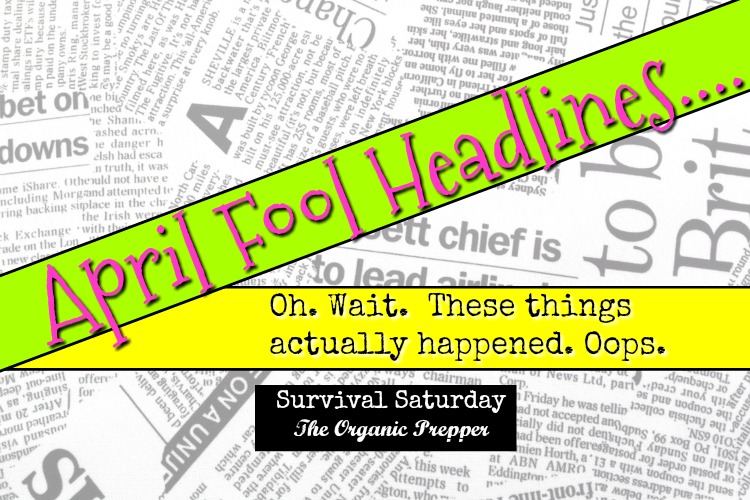 I thought we’d celebrate the April Fool’s edition of Survival Saturday with stories that should be pranks but are painfully true.

Could  You Go to Jail for Being Wrong on the Internet?

California (because where else?) suggested a law that would make it illegal to pass on “fake news.”  You wouldn’t even have to write the “fake news” – you could get in trouble for merely sharing it on Facebook or Twitter.

This little tidbit was tucked into The California Political Cyberfraud Abatement Act:.

(a) Any issue submitted to voters at an election.

(b) Any candidate for election to public office.

Ah, California. The home of Free Speech movement of the 60s now wants to silence anything with which they disagree.

When I read this, here were my questions:

Luckily, cooler heads prevailed and the bill was pulled. For now.

The Electronic Frontier Foundation kinda thought it was an April Fool too, stating that it was “a censorship bill so obviously unconstitutional, we had to double check that it was real.”

Explained EFF, “In other words, it would be illegal to be wrong on the Internet if it could impact an election. The bill is unconstitutional under U.S. Supreme Court case law (see our opposition letter for more information on that), and likely to draw immediate and costly lawsuits if it is signed into law.”

The organization issued a warning about the idea: “This bill will fuel a chaotic free-for-all of mudslinging with candidates and others being accused of crimes at the slightest hint of hyperbole, exaggeration, poetic license, or common error. While those accusations may not ultimately hold up, politically motivated prosecutions – or the threat of such – may harm democracy more than if the issue had just been left alone.

“Furthermore, A.B. 1104 makes no exception for satire and parody, leaving The Onion and Saturday Night Live open to accusations of illegal content. Nor does it exempt news organizations who quote deceptive statements made by politicians in their online reporting – even if their reporting is meant to debunk those claims. And what of everyday citizens who are duped by misleading materials: if 1,000 Californians retweet an incorrect statement by a presidential candidate, have they all broken the law?”

I don’t know about you, but I’ll bet the Fake News bill will be reworded and put back on the table, despite these dire warnings.

You can pay these ladies up to $100 a month to teach you how not to be a racist.

A couple of ladies are making so much money with this gig that they were able to quit their jobs. In the spirit of subscription boxes like Birchbox or Ipsy, you can get a “Safety Pin Box” for $25-$100 a month.

In an interview with The Cut, Marissa Jenae Johnson explained how they came up with the idea. She and her business partner, Leslie Mac, were discussing how silly that whole safety pin trend was. Johnson said:

“…when we started to see the bumper stickers and necklaces on Etsy, we had a conversation about how the commercialization is not only problematic in its own right, but that all of these things are most likely just going to [benefit] privileged white people. And that’s what brought us to say, if people want to actually do something useful, they can pay us reparations. And we can literally tell them what to do even though we’ve already been telling them, and they haven’t been listening.”

They explained how the whole thing works.

Drug companies can experiment on you without telling you.

We all know that there are clinical trials in which people are given experimental drugs. Many people are willing to do this for money, while others do it out of desperation. The currently approved options aren’t working for them and they are willing to try anything to resolve their symptoms.

Now in a fantastic, almost unbelievable new spin, our dear friends who are “representing” us in Congress have passed a bill that waives the requirement for informed consent. So, they’re still testing new drugs on humans, but now, the humans don’t have to be told the drug is experimental.

This was one of the last bills that President Obama signed into law. How sweet that he gave us one last sneaky Christmas surprise. You can go here to read more about Section 3024 of the 21st Century Cures Act.

Spring has sprung all over the place, and you’re probably thinking about ways to become more self-reliant. This is an article I wrote last year, and with more than 300 links, I’m certain you’ll find something that you can do to increase your self-reliance regardless of where you live.

Here are some articles in the preparedness realm that you may find of interest.

If you haven’t checked it out yet, my new book, The Prepper’s Canning Guide, is a number one new release. 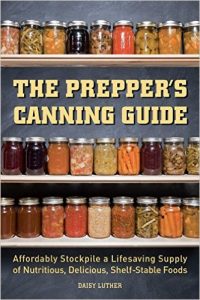 Check out a new documentary that promises us it will provide a balanced discussion about the pros and cons of vaccinations. You can go here to be notified when it’s available for a free screening.

These are some posts from around the web which I found interesting.