Survival of the Most Adaptable 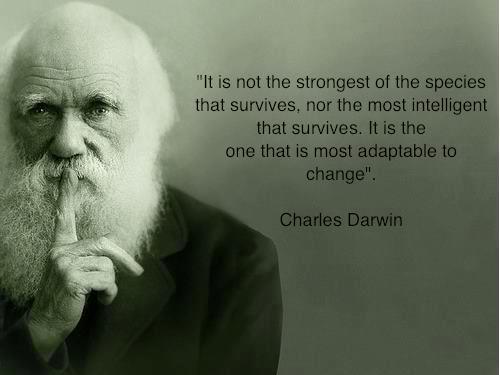 All of those are fine qualities in a prepper but there is one key to survival in nearly any situation that trumps all of the above.  Author and journalist Amanda Ripley researched it at length and published her findings in the book, The Unthinkable: Who Survives Disaster and Why. (This book is a must-read for the prepper mindset.)

That key is adaptability.

Everyone remembers the story about the soccer team whose plane went down in the Andes Mountains.  The handful of survivors had no option but to consume the bodies of their teammates.  Those who refused to adapt to that grim reality perished of starvation.

Here are some less horrific examples where adaptability might be key.

So, back to the skill of adaptation – it can really be broken down into steps, no matter what the crisis may be.  Some things require immediate action, so you have to get through the steps rapidly, while other situations allow you a little bit of thinking time.

“Adaptability is not imitation. It means power of resistance and assimilation.”

You have to accept what is.  In the event of a disaster, natural or otherwise, many people suffer some cognitive dissonance.  Their psyches are simply unable to assess the reality of the situation and accept that it’s actually happening.  Sadly, this renders them pretty much useless in a crisis situation.  Cognitive dissonance is defined as…

“the feeling of discomfort when simultaneously holding two or more conflicting cognitions: ideas, beliefs, values or emotional reactions…Dissonance is aroused when people are confronted with information that is inconsistent with their beliefs. If the dissonance is not reduced by changing one’s belief, the dissonance can result in restoring consonance through misperception, rejection or refutation of the information, seeking support from others who share the beliefs, and attempting to persuade others.”

Sadly, we are surrounded by cognitive dissonance, by people who stubbornly hang on to the way things were yesterday and refuse to adjust to the reality of today.  Denial ain’t just a river in Egypt, as the saying goes.  Some examples might be:

In a crisis situation, these people can be dangerous to be around.  A lack of acceptance of the current reality can cause fatal mistakes, endangering not only the individual, but those included in their group.

When a bad thing happens, the absolute first step is accepting that it’s happening.  Believe that the thugs are really at your door, believe that the power is out and it’s going to get cold fast, believe that the economy is making its last gasping breath.  Accept what your senses are telling you and move on to the next step.

The next step is to take action and do so immediately.  In a chaotic situation, the first actions you take can set the course for the entire event.  So, if there are gang-bangers kicking in your door, tell the kids to hide and grab your weapon. If a tornado is bearing down, go to the basement.  If you’ve lost your job, stop all unnecessary expenditures and hunker down.   If the power has gone out in the middle of a snowstorm, curtain off one room and concentrate your heating efforts there.  If your instinct tells you it’s time to bug out, grab your bag, the kids, the dog, and get the heck out of Dodge.

In cases like this, it helps, of course, if you have prepared for these events ahead of time. Clearly, no one knows exactly what the future holds, but your basic preparations will stand you in good stead in all of these scenarios.

Adjust to the new reality.

Finally, once the adrenaline wears off, you may be left with a new type of reality.  Even the most adaptable person can find this part difficult.  It’s one thing to take action when the blood is pounding in your ears and fear is speeding you along.  It’s quite different to live a new life in the day to day.  Depression and unhappiness can set in when you are removed from beloved and comfortable surroundings.  This is the hardest step for many people.  If you’ve planned ahead and prepped your family but then for some reason, like a fire or natural disaster, those preparations are gone, then you may feel like it was all for nothing.

It couldn’t be further from the truth, though.  As  Hubert H. Humphrey Jr. famously said, “It is not what they take away from you that counts. It’s what you do with what you have left.”     If you had to start over, right this instant, think of all the things you’ve learned during the time you’ve been awake and aware.  You have learned to prioritize for the future instead of satisfying the whims of the here and now.  You may have learned skills like gardening, personal defense, food preservation, or chopping firewood.  Your MIND is the number one tool to help you adjust to the new reality, whatever that reality may be.  Most of all, you’ve learned how to think.  No fire can take away the knowledge you’ve acquired.  No thieves can steal your learned skills.  No natural disaster can undo the mental preparedness that you have built up.

How can we become more adaptable?

If you’re reading this article you are probably more than halfway there!  It’s the nature of a prepper to think about the things that might go wrong.  That is how we become better prepared for a variety of events, natural and otherwise.

Run scenarios with your loved ones.  This is one case in which television can actually be valuable.  Some programs and movies can serve as a teaching tool.  For example, I watched an older episode of Criminal Minds with my daughter, in which a child her age was approached by a nice looking man and tricked into going into a secluded area, where she was then kidnapped.  We watched the scene in its entirety, then we backed up and replayed it bit by bit, discussing the warning signs and what the girl could have done differently.  We discussed ways that something similar could happen here in our hometown and ways to respond to similar threats.  When terrible things happen in the world, discuss them and determine a few courses of action that could be taken to avoid becoming a victim.

Keep up with current events.  Notice trends in the economy, crime, and government.  Pay attention to things happening in other countries too – what happened in Greece a few years ago is happening in the United States now.  Learn from their collapse to predict what might happen during ours, and then prepare accordingly.

Think about your preps critically.  Have you ever realized that a preparation you’ve made isn’t all it was cracked up to be?  I recently discovered that some food I’d stored away was loaded with bugs (gross!!!!!!!)  Luckily, I didn’t lose a great deal of food and I learned a valuable lesson about the way I had been storing that particular item.  If you live in an earthquake-prone area, are your jars of home-canned food secured against breakage?  Do you have “enough” ammo and the means to make more?  Do you have back-ups for your primary garden tools?  Extra handles and blades?  Sometimes adaptability takes a little advance preparation.

Even if you don’t agree with all the conclusions of Charles Darwin, there is much to be learned from his studies of nature. Although he was talking about reproductive evolution in his writings, his premise rings true for those of us who intend to survive challenges, both mundane and extraordinary. You don’t have to be the strongest, smartest, fastest or toughest.  You have to be the most flexible. Whatever comes your way, take it and roll with it.

It is the one that is most adapatable to change.”