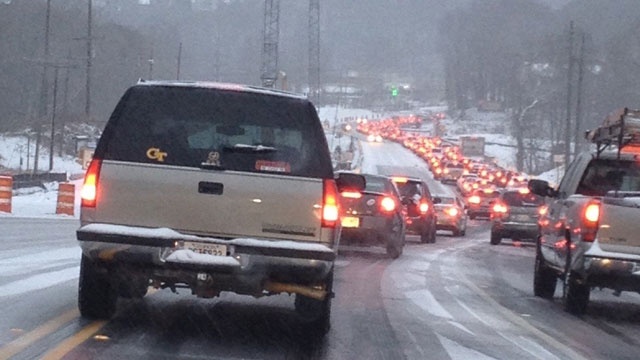 An unusual snowstorm in the Southeastern US left hundreds of motorists stranded overnight in their vehicles. Like a scene out of “The Walking Dead” (but with snow), freeways in Georgia and Alabama came to a complete halt in an epic gridlock.

Residents of the area were warned that a winter storm, quite severe for that part of the country, was headed their way.  But when the morning dawned without a cloud in the sky, people went blithely about their business.  Kids went to school, adults went to work, and it all went downhill in the early afternoon in a big way.

Thousands of students ended up spending the night at school, while others were trapped on school buses slowly getting them home. One group of kids in Atlanta were still on a school bus inching along 16 hours after they departed the school.

This wasn’t a dumping of 2 feet of snow, but a mere 2-3 inches.  Before those who live in Northern climates snicker, consider these facts: this kind of weather is nearly unheard of in Georgia and Alabama, and many of the motorists would have been perfectly fine driving home, but ended up being stranded due to the incompetence and panic of other drivers.

Cars on the freeways were at a complete standstill. No matter what a person’s winter driving skills were, they were stranded behind everyone else’s halted vehicle.

Everyone had been warned. Atlanta was expecting 1-2 inches. But people did not heed the forecast.

In the morning, when the snow had not arrived, people went to work and school, like nothing was coming.

Motorists panicked at around the same time in the afternoon. They clogged the streets en masse just as they began icing over.

In the end 2-3.5 inches hit central Georgia. That may not sound like much, but it’s usually how much snow falls in the region in a whole year, said CNN meteorologist Taylor Ward.

Motorists thought they could deal with it. They couldn’t. The spin-outs began.  (source)

The take-home preparedness point here is that it doesn’t matter how great of a driver you are in the snow, whether or not you have move to the tropics from your winter chalet in Antarctica, or whether you have huge knobby tires and 4WD.  Over-confidence in your own ability can cause people to forget about the lack of skills that other folks have. Many times, people end up in a crisis situation through no fault of their own and are at the mercy of other people who have no idea what they are doing.

Real-life scenarios we can learn from

An article from News 12 told the stories of several people who had been stranded due to the unusual weather.  Thinking through these events can make us better prepared. Let’s look at these situations from a prepper’s point of view and consider what supplies or courses of action we could take if we landed in a similar scenario.

Rebekah Cole prepared to spend the night in her car on an Atlanta street as the temperature slid into the teens and her tank ran low on gas.

She described what she had seen all around her as a “zombie movie.”

Streets, highways, interstates gridlocked with people in cars and trucks in the same situation she was in — stranded on the ice for 8, 10, 12 hours.

She left work Tuesday afternoon and was still sitting in traffic at 1 a.m. Wednesday. As she prepared to spend the night in her car, she hoped it wouldn’t run out of fuel.

“If I get gasoline, I will turn the heater on, keep the windows cracked a little bit,” she said.

The gas station was within sight, and it was swamped with people trying to get gas ahead of her.

Then the fuel light in her car went on. (source)

Preppers know that you should always keep your gas tank above the half-full mark.  A well-stocked vehicle would have had blankets or sleeping bags, as well as a candle that could be burned in the vehicle for warmth.  Finally, if you have proper footwear and attire, a four and a half mile walk home should not be unrealistically daunting in only a few inches of snow. (Note: This assumes that you are in good enough shape to do this with a loaded bug out pack – it’s important to be realistic regarding your physical condition and abilities.)

“I’m eight months pregnant and have my 3-year-old with me,” Atlanta-area resident Katie Norman Horne said on “SnowedOutAtlanta,” a Facebook page set up to help stranded motorists.

“We’ve been in the car for over 12 hours. We are fine on gas but is anyone near on the road and might happen to have any food or some water?” (source)

Every vehicle should have an emergency stash of food and water. We keep a Rubbermaid container with graham crackers, peanut butter, granola bars, 2 gallons of water, a can opener, and various canned goods in our vehicle. If you have small children, the addition of some kid-friendly treats and some items like coloring books, crayons, story books, and small toys would help your child to endure in long stay in the vehicle in much better spirits.

In Alabama and Georgia, authorities asked motorists to stay off the roads.

“This is a very dangerous situation,” Bentley said. “People need to stay at home. They need to stay there until conditions improve.”

Atlanta Mayor Kasim Reed urged residents to stop driving for at least a day to give crews a chance to clean up.

The warnings not to drive came too late for countless people. The admonitions to make it home impossible to fulfill.

Until they clear the roads, motorists may be stuck on ice for a while. (source)

This truly is the best advice.  In situations like this, the best preparedness strategy is to avoid the entire mess.  If you have everything you need at home, there are few reasons that you’d have to venture out into the chaos. The biggest danger in a scenario like this is dealing with the panic of someone who is unprepared, mentally and physically.  Their poor decisions and panic can cause unavoidable accidents.

A while back, a family in Nevada was stranded for several days in the frigid wilderness. Due to the supplies they had in their vehicle and the ingenuity and determination displayed by James Glanton, they survived a life-threatening situation.

Your kit should contain all of the basic items:

A variety of tools should be on hand in the vehicle: