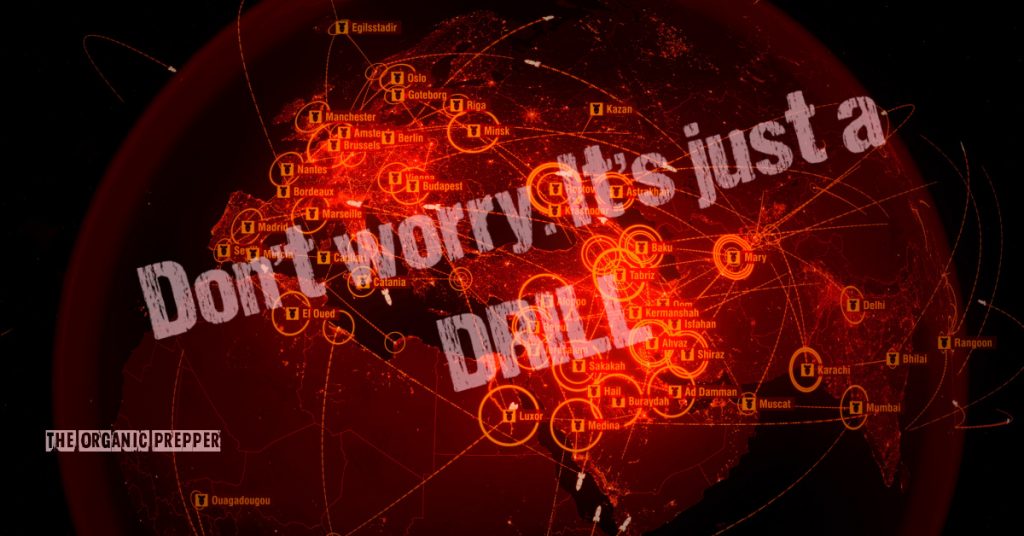 By the author of The Faithful Prepper, The Prepper’s Guide to Post-Disaster Communications, and Zombie Choices.

As the war rages on Ukrainian soil, NATO has geared up for its annual nuclear response military exercise: Steadfast Noon.

There have been a number of military exercises and simulations that The Organic Prepper has covered over the years. Some, like Robin Sage, have largely been taken out of context by a lot of people. Some, like Cyber Polygon, deserve careful thought. We believe that this is something you need to, at the least, be aware of.

What is Steadfast Noon?

Steadfast Noon is an annual NATO training exercise that is designed to test NATO’s nuclear attack response. According to NATO itself, “Steadfast Noon involves training flights with dual-capable fighter jets, as well as conventional jets backed by surveillance and refueling aircraft. No live weapons are used. This exercise helps to ensure that NATO’s nuclear deterrent remains safe, secure, and effective.”

It isn’t anything new. In fact, the above link will take you to a 2021 page of the exercise. But things are a bit different at the moment. With everything going on between Ukraine and Russia, the idea of running a nuclear simulation may be something that will give you pause.

Nevertheless, as of this past Monday, the simulation began. Steadfast Noon is typically a week in duration, so it will likely wrap up over the course of this coming weekend.

This year, Steadfast Noon involves up to 60 different aircraft, with fighter jets, surveillance planes, refueling planes, and long-range B-52 bombers.

The B-52s don’t appear to be a new addition to Steadfast Noon. It appears as if they’ve been flown from the United States to NATO for years throughout the history of this exercise. This year, however, the B-52s are scheduled to fly out of Minot Air Base in North Dakota.

NATO has been very consistent in saying that this exercise will not involve any live weapons of any kind but instead is simply a means of testing their policies and procedures and making sure that there are no hiccups in a speedy nuclear response.

NATO itself has stressed that this military exercise is not tied to any current events whatsoever.

Instead, according to NATO Secretary General Jens Stoltenberg, “It would send a very wrong signal if we suddenly now canceled a routine, long-time planned exercise because of the war in Ukraine. That would be absolutely the wrong signal to send.”

Stoltenberg went on to add, “NATO’s firm, predictable behavior, our military strength, is the best way to prevent escalation. If we now created the grounds for any misunderstandings, miscalculations in Moscow about our willingness to protect and defend all allies, we would increase the risk of escalation.”

While there is a new NATO nation that sponsors the drill every year, this year, it is being hosted by Belgium. Flights will also be tested over Great Britain and the North Sea, though it has been said that the closest that the training exercise will get to Russia is 625 miles.

If you are concerned about your own nuclear readiness, you may want to check out our webinar coming up this Saturday night. (Recordings will be available.) Go here to register.

Does NATO have a nuclear response?

Currently, the United States, England, and France are the only NATO nations that have nukes of their own. NATO, as an organization, technically doesn’t have its own nukes. However, NATO possesses a nuclear weapons-sharing program. According to this, any nukes that are in storage in a non-nuclear nation can be used by that host nation in “an emergency to combat enemy forces.”

It is currently thought that Belgium, Turkey, Germany, and the Netherlands are some of these sites that have “shared” nukes.

Of its own nukes, France has publicly stated that it will not use them against Russia if Russia uses tactical nuclear weapons against Ukraine. Macron said that the nuclear doctrine of France is based upon what is in the best interest of France and that French nuclear doctrine is “defined clearly and wouldn’t be directly affected at all if, for example, there was a ballistic nuclear attack in Ukraine, in the region.”

If Ukraine is admitted into NATO, however, a nuclear attack against the country could potentially result in a nuclear response from NATO, according to Article 5 of the NATO charter. It also may not matter what Macron’s public opinions are on French nukes if those bombs have been placed in a neighboring NATO country that does not hold Macron’s public hesitations.

What are your thoughts about all this?

Do you agree with Stoltenberg’s ideas that canceling Steadfast Noon would have been taken as a sign of danger? Or, instead, is continuing on with a nuclear response exercise during a war something to be concerned about? Tell us your verdict, as well as what you think would be the best course of action, in the comment section below.