THESE 20 STATES Threaten Legal Action Over the Ministry of Truth 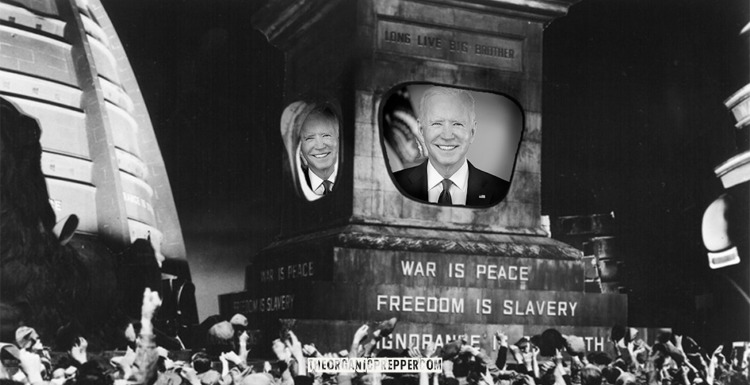 The attorneys general of 20 states have threatened legal action against the US government unless they disband the newly formed Disinformation Governance Board.

We shared with you recently an article about the people behind the DGB, who have a history of trying to curb dissenting speech by calling it “disinformation.” We here at the OP have been the targets of censorship before and would not be surprised to see more of the same. (Here’s how we’re meeting the possibility of further oppression head-on.)

It turns out that we’re not the only ones concerned about this.

In a letter addressed to DHS Secretary Alejandro Mayorkas, the Attorney General of Virginia, Jason Miyares, spoke for the AGs of 19 other states and shared his concerns about the overreach.

The letter was acquired by ReclaimtheNet.org.

As the chief legal officers of our respective States, we, the undersigned Attorneys General, are tasked not just with enforcing the laws but with protecting the constitutional rights of all our citizens. Today we write you to insist that you immediately cease taking action that appears designed exclusively for the purpose of suppressing the exercise of constitutional rights.

Every American knows that the Constitution forbids the government to “abridg[e] the freedom of speech.” US Const. Amend. I. As Justice Robert Jackson wrote nearly eighty years ago, “[i]f there is any fixed star in our constitutional constellation, it is that no official, high or petty, can prescribe what shall be orthodox in politics, nationalism, religion, or other matters of opinion.” West Virginia State Bd. of Educ. v. Barnette, 319 US 624, 642 (1943).

Your recent testimony before the US House Appropriations Subcommittee on Homeland Security, however, indicated that the Department of Homeland Security, under your leadership, is doing exactly that: prescribing orthodoxy by slapping a federal-government label of “disinformation” or “misinformation” on speech that government bureaucrats, operating behind closed doors, decree to be improper. This is an unacceptable and downright alarming encroachment on every citizen’s right to express his or her opinions, engage in political debate, and disagree with the government. The Biden Administration’s latest effort to decide what speech is “acceptable” and “orthodox” combines McCarthyite speech policing with the secrecy of the English Star Chamber.

In short, you seem to have misunderstood George Orwell: the “Ministry of Truth” described in 1984 was intended as a warning against the dangers of socialism, not as a model government agency. “MiniTru” and its thuggish apparatchiks are the villains in that story, not the heroes. For the sake of our democracy, you must immediately disband the “Disinformation Governance Board” and cease all efforts to police Americans’ protected speech. The existence of the Disinformation Governance Board will inevitably have a chilling effect on free speech. Americans will hesitate before they voice their constitutionally protected opinions, knowing that the government’s censors may be watching, and some will decide it is safer to keep their opinions to themselves.

The resulting damage to our political system and our culture will be incalculable: as a democracy, our political debates and decisions are supposed to take place in the public square, where every citizen can participate, rather than in government office buildings where hand-picked and unaccountable partisan committees are insulated from public supervision and criticism.

(Read the rest of the letter here.)

The letter goes on to question the timing of the new Ministry of Truth (just as Elon Musk completes the purchase of Twitter with the stated goal of restoring free speech on the platform). It also calls into question the dubious qualifications of head honcho, Nina Jancowiz, who AG Miyares describes as “often in error but never in doubt.”

How will the AGs enforce this?

Unless you turn back now and disband this Orwellian Disinformation Governance Board immediately, the undersigned will have no choice but to consider judicial remedies to protect the rights of their citizens.

We sincerely hope this puts a halt to the censorship efforts of the Biden administration.

Who signed the letter?

The letter was signed by the attorneys general of 20 states. We hope that other states follow in their footsteps to protect this vital constitutional right. (Contact your state’s AG and let them know you support them or want them to get on board, too!)

The following AGs signed the letter.

What do you think about the letter? Do you feel it will gain traction with the DHS and the current administration? Do you think more states will get on board? How can we support our AGs who are standing up for our constitutional rights? Share your thoughts in the comments.