SELCO: It’s Not the Virus You Need to Worry About. It’s the System 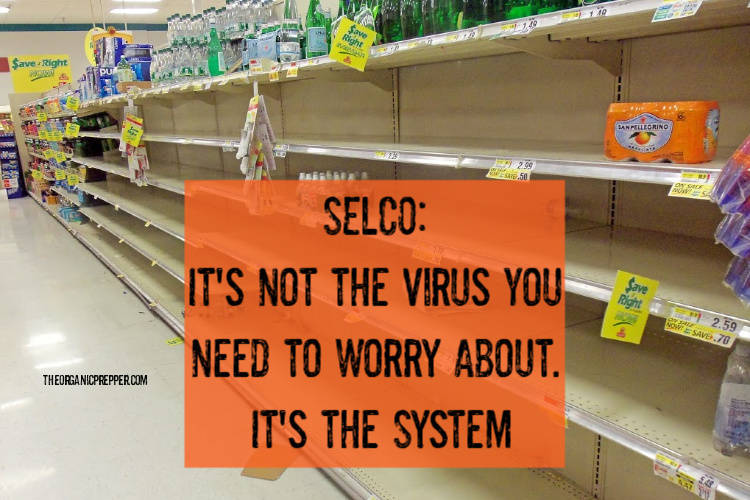 What would you do if one morning in your city you found out that there are confirmed cases of a new illness that rapidly spreads among citizens, and let’s say killed 15 people?

What if you saw on Facebook that in your neighborhood, in some mall, for example, a few people passed out and people said it is because of that illness?

What if you read in the news that the virus is very contagious and it spreads by air very quickly?

What if you saw people rushing into pharmacies for face masks and medications, and into the grocery stores for food and water supply?

Would you continue to live as before or you would consider going into survival mode and stay home with your family, or to leave a densely populated area to go to your cabin on the lake?

What do you imagine that people who are working in electric companies, police services, hospitals, fire departments, food delivery systems, public transport companies and elsewhere would do?

Do you think people working in areas that hold the system together would continue to go to their jobs or some of them might consider the option to go home and take care of their families? Do you think the stores will remain stocked? Do you think everything will keep running as normal?

How large a number of those people would there be? How would that affect the system? Would that mean the system might collapse?

Well, nobody knows for sure, but I think there is a big possibility for that.

It’s not the virus you have to worry about. It’s the system.

Virus or illness on itself might not be a problem in its essence, but the impact that it brings to the system and people might be so huge through the media that it causes the system to stop working in the normal way. So you could find yourself in a collapse not necessarily because of a huge pandemic, but because of the reaction to it.

Another case might be the simple unwillingness from the system to admit how bad the situation is in order to stop the panic when folks realized the truth.

So, what might bring the system to collapse might be a real pandemic or a reaction to the pandemic (which might or might not be controllable) or simply the government’s poor or late response to the pandemic.

I am not into fear-mongering, so I am not expecting an end of the world pandemic because the current virus most probably might be (like many times before) something that will be controlled with just a few troubles before it becomes a worldwide problem.

Right now as far as we know it could be a flu-like problem. What kinda brings things to our attention is the reactions from the government where the virus was born.

“Over-reacting” is a small word for it, and if we want to be positive about it, we might say that they are going with a “better safe then sorry“ attitude, but…

Media today is a big monster that feeds on sensational news and fear-mongering. It sucks you into watching the news, the “latest reports,” and updates. It kinda makes you addicted to it.

I will not even go into a discussion about product-selling based on “fear showering.”

To pay attention to the news make sense. To be addicted to it, and to base your most important life decisions on the “latest updates“ could mess you up really badly.

Or let me put it like this. If you waited for the Coronavirus to happen in order to go to the pharmacy and buy face masks and disinfectants, you have a serious flaw in your prepping. You should have that all the time in your preps.

You are a prepper/survivalist. You should be ready more or less for the disruption or fall of the system. You should already have plans, stashes, etc.

Remember, the event that leads to that might be less important, the result of that is pretty much always the same – more people than goods around you because of a disruption of the normal system. Try to concentrate on that (of course with some additions for the particular event that led to that situation)

Do not forget one basic fact: you as a prepper/survivalist, at your core, most probably do not trust the system.

I am not saying you hate it, but you just do not trust it completely.

So, watch the news and announcements. Help if possible, obey if possible (and if it makes sense) but always keep in mind that the system at its core has a very basic obligation: to keep that system running. If that means the system has to lie to you or let’s say, bend the truth, it will do it, because to the system you are an individual, and the system is machinery that needs to run.

So, keep some common sense, and trust your gut instinct.

Focus on the Basics

No matter what, in the end, it always comes down to the basics.

So when you not sure what to do and when you are not sure what is gonna happen just go back to the basics and think about how you can keep yourself and your family secure and safe, fed, as far as possible from trouble, healthy, warm…and for how long.

Do not forget the emphasis on “how long.”

Do not get mesmerized by a particular possible event too much or too long, because yes, in the end, it is about the basics.

If you are reading this, it means you are among the people who are ready for it – as ready you can be –  so do not panic.