RIOTS: 3 Places All Hell Has Broken Loose in the Last Few Days 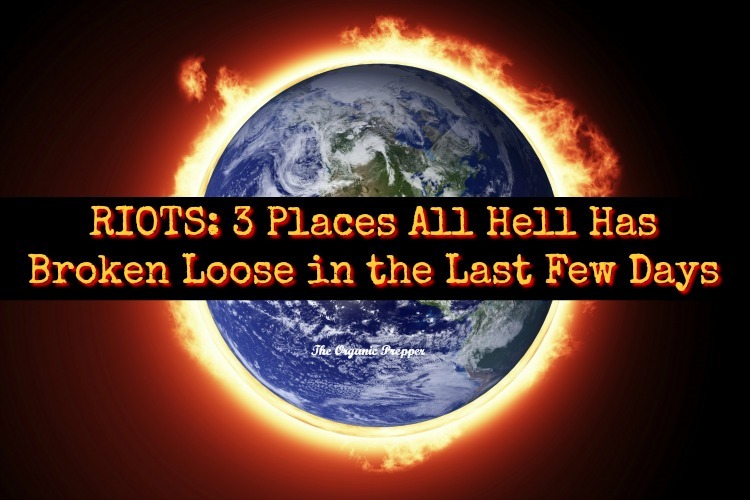 A lot of people like to think that the SHTF is some distant thing that probably won’t ever happen. But, in reality, it happens every single day, someplace in the world. Riots have occurred all over the world recently, stranding travelers, destroying property, and causing serious injuries and death.

Here are 3 different places where all hell has broken loose in just the past few days.

It’s a bad time to be in Haiti right now. Apparently, an increase in gasoline prices has caused people to take to the street. A number of American missionaries are currently hunkering down in fear for their lives. They’re unable to get out of the country because many airlines have canceled all flights in and out of the country.

Savannah Peek, a missionary with a team from Richmond County, North Carolina, told WSOC said they are terrified for their lives…

…“We heard gunshots start and they were very close,” said Peek. “At this point, we all dropped immediately to the ground. We’re all on our hands and knees. Everyone’s screaming, everyone’s crying.”

Peek said guns were handed out to civilians for protection.

“People started passing out guns to civilians because we thought the (men) were about to break in and rob us, kill us, start a fire. We had no idea,” she said. (source)

The US Embassy in Haiti issued the following alert:

Due to continuing demonstrations, roadblocks, and violence across Port-au-Prince and throughout Haiti, U.S. citizens should continue to shelter in place.  Do not travel to the airport unless you confirmed your flight is departing.  Flights are canceled today and the airport has limited food and water available.

Telecommunications services, including Internet and phone lines, have been affected throughout Haiti.  It may be difficult to reach people through normal communication methods.

U.S. Embassy personnel are still under a shelter-in-place order.  The embassy will continue to monitor the situation.

The U.S. Embassy will be closed for routine services Monday July 9.  Non-emergency appointments will be rescheduled for a later date.  The Embassy remains open for emergency U.S. citizen services.

Here’s some shocking video footage of the riots.

In Nantes, a city in France, a battle has been going on between African migrants and the French police for days now, after the police shot a 22-year-old migrant named Aboubakar Fofana. The riots went on for 4 days but eased when relatives of the Aboubakar Fofana said they were filing a lawsuit.

Initially, police said that the victim was shot because he tried to run over a police officer with a car. Later, they admitted the shooting was in fact NOT self-defense, but an accident.

The worst of riots looked like a war between police and migrants.

The police forces were deployed massively in the neighborhoods of the rioters. They fired Molotov cocktails at Breil and Bellevue and responded with tear gas grenades.

In total, 35 vehicles were burned. To prevent a resurgence of fires, since last night, Friday, July 6, the Region has banned the retail sale of fuel and fireworks.

In the Breil district, the beginning of a fire hit a building of the Nantes Habitat social landlord. The damage, however, seems small: except for some traces of fire near the building, only a window is barred by a sign; the building is intact.

“Put your weapons, gang of assassins” or “you are going to be afraid in your houses” are the slogans that were launched to the CRS came to reinforcement in the districts. (source)

According to Zero Hedge, things are only going to get worse in France.

The  GEFIRA team expect riots in France to become more and more violent and eventually lethal. Like most Western European societies and the US, the demographic change and the gradual replacement will come with a hefty price.

There are signs that white French bourgeoisie youth will join the violent protests, like Black bloc and Antifa. (source)

Here’s some video footage of the chaos in Nantes.

And right here in the United States, violent riots have erupted over the Trump administration, political differences, and immigration policies. Portland, Oregon has been the heart of many political movements since the election of President Trump, starting the day after the election in which Hillary Clinton suffered a surprise loss.

The riots in the city have been going on for the past couple of months, with some particularly heated moments occurring in early July. A Patriot Prayer rally turned violent when members of Antifa showed up and began pelting them with firecrackers, eggs, and water bottles.

The counterprotesters were identified as the Eugene Antifa, who named their demonstration“Defend PDX: Patriot Prayer’s Violence Must End.”

“It is very important that antifascists keep up the pressure so that we can stop them once and for all,” a Facebook event page for the counterprotest read.

“While many acolytes have broken away from Gibson at this point, the core that remains, largely Proud Boys, have grown increasingly violent,” the page said. “For this reason we must sustain our campaign, and keep up our efforts on as many fronts as possible until they completely cease their despicable activity.” (source)

The demonstrators didn’t hesitate to fight back and police used firecrackers, smoke bombs, flash bangs and “aerial distraction in an attempt to disperse the crowd.

This isn’t the first time the groups have gone head to head. They also became violent toward one another in early June and previously, in 2017. Below is a video of what some people are calling “The Battle of Portland.”

What can we learn from all this?

I’m all for protesting and demonstrating against things that are unjust. The right to peaceful protest is written right into the American constitution.

But what we can all learn from this is how quickly something that starts out as a peaceful protest can be disrupted and turned into a violent riot. It can happen anywhere, at any time, and if you are unfortunate enough to be nearby, it can be a life-threatening emergency in some cases.

Here are the things to remember: