The “Right to Repair” Movement Is Fighting Planned Obsolescence 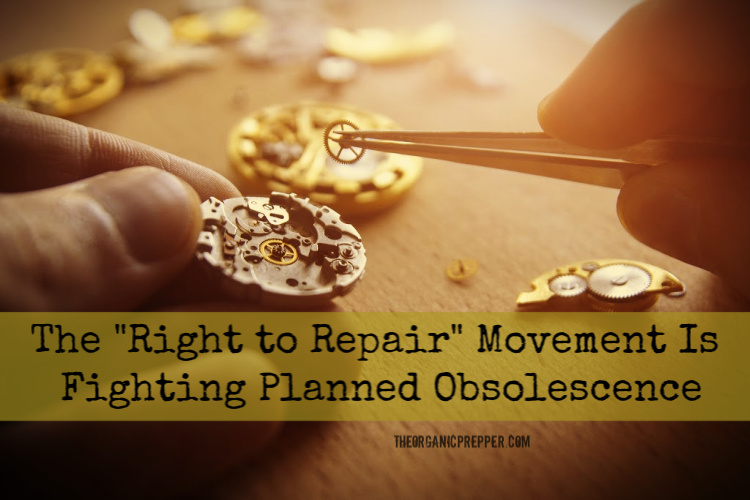 When planned obsolescence goes too far, the people of the Right to Repair want the right to…repair things.  They aren’t fighting back with pitchforks and torches, but rather, screwdrivers and torch lights.

As a prepper, having supplies that last and are able to be repaired can only be a good thing. And part of the reasons it’s so difficult to reduce our consumerism is that everything just keeps breaking on us.

So, what do climate change regulations, so-called efficiency products, and planned obsolescence all have in common?

All three are crashing into each other and making everyone miserable and poorer.

What is planned obsolescence?

Planned obsolescence means the deliberate altering of a product to break down at a certain point (often right after the warranty is up) forcing the consumer to buy another. Another aspect of planned obsolescence is designing the product to prevent repair either by gluing parts together or using obscure parts and not allowing the sale of spare parts. In many cases, the products are too cheaply made to warrant money spent on repairs, so millions of products end up in the dump, making people wonder why they buy things in the first place.

Planned obsolescence has coincided with the climate change fever pitch and the fear of CO2 emissions. These two things have coincided with goods that are ostensibly manufactured to be energy “efficient.” As some folks are pointing out, however, it is anything but efficient to create more and more junk, then having it sit in landfills and break down into the environment.

How can you have environmentally friendly products that do nothing more than create waste? A senseless waste of resources. In 2017 alone, 525,000 tons of waste electronic and electrical waste were collected, just in the UK. And this waste only applies to household appliances. This is to say nothing of the labor involved to mine the resources and make these cheap goods.

More than that, people are just plain ticked off to have spent so much time and money on products that are purposely designed to break and engineered in a way that bans people from repairing them. It’s not that people don’t want to repair products. It’s that the product doesn’t allow for it – there are no available spare parts. And most frustrating of all, it can cost more to repair some products than to buy more.

Meet the Right to Repair movement.

The practice of planned obsolescence obviously benefits money hungry companies at the unfair expense of the customer.

People from the UK and the U.S. have spoken up about the inability to repair cheap goods.

The UK community repair movement is a worldwide group of “repair activists” that want others to stand with them to persuade designers, manufacturers, and government to make sure that products at least have the ability to be repaired.

They have released “The Manchester Declaration,” which says:

We are part of a growing movement pushing for our Right to Repair worldwide, alongside independent repair businesses and citizens frustrated with the early obsolescence of most of today’s products.

We ask UK legislators and decision-makers at all levels, as well as product manufacturers and designers, to stand with us for our Right to Repair, by making repair more accessible and affordable, and ensuring that we adopt product standards making products better supported, well documented and easier to repair by design. (source)

If you are interested in joining, find them over at the Restart Project.

What is the government’s role?

BBC reports that stopping the anti-repair practice consists of…

[…] a series of proposals from European environment ministers to force manufacturers to make goods that last longer and are easier to mend.

At least 18 US states are considering similar laws in a growing backlash against products which can’t be prised apart because they’re glued together, or which don’t have a supply of spare parts, or repair instructions. (source)

Will all these bureaucracies and directives really bring about products that work? I have suspicions. The urgency behind climate change and Agenda 21/Agenda 2030 wants to see a world with less consumption, fewer resources, and fewer goods. Every day the media pushes a false narrative of scarcity.

It is more likely there will be crimps on many resources.

How will this plan move forward?

If you’re wondering how this will proceed, here’s a summary.

European environment ministers have a series of proposals forcing manufacturers to make goods that last longer and are easier to mend. The European proposals refer to lighting, televisions and large home appliances.

Plans for the EU Ecodesign Directive are complex and controversial. Manufacturers say the proposed rules on repairability are too strict and will stifle innovation.

Consumer campaigners complain the EU Commission has allowed firms to keep control of the repair process by insisting some products are mended by professionals under the control of manufacturers.

The European Environmental Bureau (EEB) said: “This restricts the access of independent repairers to spare parts and information – and that limits the scope and affordability of repair services.” The EEB also wants other products like smart phones and printers included in the legislation. (source)

Environment Minister Thérèse Coffey said that efficiency was “key to improving our productivity and making best use of precious resources”.

“That is why we are supporting measures in the new Ecodesign Directive product regulations to encourage repair and re-use of a range of products,” she told BBC News.

No, the Right to Repair movement will not stop planned obsolescence.

Like I said before, efficiency means using less energy and other resources, putting a strain on the consumer.

In the UK, the amount of power allowed for vacuum cleaner suction continues to be slashed. When you think of an “efficiency” toilet, remember it is anything but. When you have to flush two or three times, does that really help the environment?

The government is supporting all things that crimp energy usage and pretending that they’re doing you a favor. Kind of like those “eco-friendly” shower heads that give you that I-showered-but-it-looks-like-I-didn’t look.

More about being allowed to repair products:

There’s another debate about how readily consumers should be allowed to mend appliances. The Right to Repair movement wants products that can be fully disassembled and repaired with spare parts and advice supplied by the manufacturer.

Some manufacturers fear that bungling DIY repairers will damage the machines they’re trying to fix, and potentially render them dangerous.

One industry group, Digital Europe, said: “We understand the political ambition to integrate strict energy and resource efficiency aspects in Ecodesign, but we are concerned that some requirements are either unrealistic or provide no added value.

Of course, the industries are acting ridiculous in suggesting that in order to protect propietary design, they need to design garbage goods.

Still, the Right to Repair movement is only asking for a little breadcrumb from the table. It will not stop planned obsolescence and neither will the government.

What’s cool about them is that they are organized, have a cohesive voice, and one clear demand. So more power to that!

It means that a product can last forever and become something else instead of toxic waste that simply gets repurposed.

One author leading the way for “cradle to cradle” design is William McDonough who wrote, Cradle to Cradle: Remaking the Way We Make Things and The Upcycle: Beyond Sustainability–Designing for Abundance.

Even products and things that are touted as “eco-friendly” are anything but friendly. For instance, putting people in third-world countries into homes made from plastic garbage should be a disgrace. It doesn’t give people a safe home and it doesn’t solve the problem of plastic waste. Nor does a baby rattle made from recycled plastic which contains endocrine-disrupting phthalates. Rotating non-biodegradable waste will not get rid of the main problem: that we’ve created toxic products that have no outlet.

McDonough argues that we can change all that if we design a product that will always have a new life (become reborn) and never have a reason to be eradicated. Check out his TED talk on YouTube.

I don’t agree with everything he says, but at least he’s not anti-commerce, anti-earth, and he doesn’t buy the “everyone must sacrifice” lines blaring out from behind the Agenda 21 curtain.

What do you think of this news?

Are you going to join the Right to Repair efforts? How do you personally fight planned obsolescence? Let us know in the comments below!