Portland School Cracks Down on Racist PB&J Sandwiches: “What about Somali or Hispanic students, who might not eat sandwiches?” 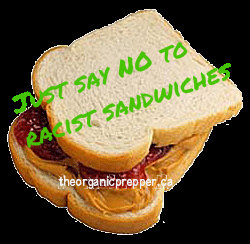 You know, people have had about enough of all of this racist garbage.  It’s time to put a stop to language that excludes others.  Take the mention of peanut butter and jelly sandwiches for example.

One school administrator began the school year cracking down on exclusive language.  Verenice Gutierrez, principal of Harvey Scott K-8 School in Portland, Oregon, hears subtle racism every day.  And that’s just plain wrong.  She explained to the Portland Tribune in September how a simple example of a peanut butter and jelly sandwich in a classroom indicated “white privilege”.

“What about Somali or Hispanic students, who might not eat sandwiches? Another way would be to say: ‘Americans eat peanut butter and jelly, do you have anything like that?’ Let them tell you. Maybe they eat torta. Or pita.” (source)

There was no mention in the article whether the teacher was talking about sandwiches on white bread or whole wheat bread.

Guttierrez , along with the other principals in Portland, are part of a district-wide initiative to examine the lack of racial equity in the school system.  The program is called Courageous Conversations.

Through intensive staff trainings, frequent staff meetings, classroom observations and other initiatives, the premise is that if educators can understand their own “white privilege,” then they can change their teaching practices to boost minority students’ performance.

Last Wednesday, the first day of the school year for staff, for example, the first item of business for teachers at Scott School was to have a Courageous Conversation — to examine a news article and discuss the “white privilege” it conveys.

Like many if not all of PPS’ leaders, Gutierrez has gone through California-based consultant Glenn Singleton’s “Coaching for Educational Equity,” a weeklong seminar on race and how it affects life; she’s also become an “affiliate,” certified to teach the equity curriculum; and she serves on the district’s administrative committee to address systematic racism, a group that meets every other week.

“Our focus school and our Superintendent’s mandate that we improve education for students of color, particularly Black and Brown boys, will provide us with many opportunities to use the protocols of Courageous Conversations in data teams, team meetings, staff meetings, and conversations amongst one another,” Guitierrez’ letter to staff reads. (source)

The program is based on a book by Glenn E. Singleton: Courageous Conversations About Race: A Field Guide for Achieving Equity in Schools.  This example of political correctness run amok is racing across the country (oops – can I say racing or is that racist?) in the form of “summits” for educators.  According to the St. Louis summit website, it’s subtle racism that is causing a disparity between white kids and non-white kids.

The statistics are stark and revealing, and our task as educators is undeniable: We must continue to engage in honest, unapologetic conversations about racial disparities in education and effective ways in which to unlock the untapped potential of children of color. (source)

The Pacific Education Group is also on board with the summits.  Here is their goal:

Each October, PEG brings together dedicated racial equity leaders from throughout the U.S. and around the world to engage in a deepened conversation about systemic racism and its impact on opportunity and achievement for all students. The National Summit for Courageous Conversation is uniquely designed for educators, civic and community leaders, and other professionals who are committed to elevating individual/organizational racial consciousness and eradicating racial disparities that are predictably evident in academic achievement. (source)

I have this really cool idea that would help raise test scores across the board.  What if….and this is revolutionary….the teacher’s just TAUGHT.  What if kids learned math, science, and English?  What if the schools scrapped the Common Core curriculum and focused on teaching all of the kids their lessons until they understood them, and then moved on to the next unit, instead of covering each section for a designated time and then moving on to the next one, regardless of whether or not the students understood the first lesson?  What if the schools stopped trying to brainwash children about the dangers of guns, the language of racism, and all of the politically correct baloney that they spend more time on than the Three Rs?

Oh wait.  They can’t do that.  That would create independent thinkers and intelligent adults.  Their entire plan to subjugate the population would be ruined.  Whatever was I thinking?  Please, by all means, continue shaming children into political correctness by indicating that the contents of their lunch boxes are racist.  We definitely can’t continue on our path of “white privilege” by considering typically American cultural norms…normal.

Extreme political correctness is destroying the public school system, the only chance for education for many children whose parents can’t or won’t homeschool.  Imaginary offenses create an atmosphere of shame and fear.  The better to control you with, my dear.