Is Your Child a Student or a Slave? 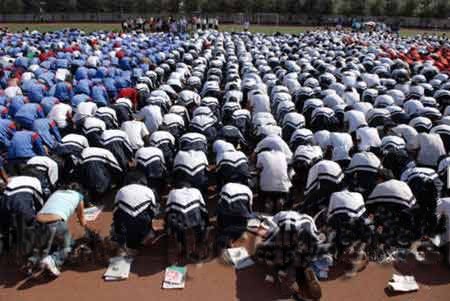 UPDATE: Please check the end of the article for an update on this situation.

Back to school sure isn’t the same as it used to be.

When I was a kid, our only concerns were whether or not our clothes would be cool enough to meet the other kids’ approval or if we would have someone to sit with during lunch.

But now students have a whole new batch of problems.  Will their jewelry set off the metal detectors as they enter the school?  Will they have to crouch behind a desk in fear as a gunman shoots up the place? In the case of Chicago, will they be shot as they cross gangland borders on their walk to school? Will they be terrorized during an unannounced “live shooter drill” as was the case in Rossford, Ohio? Will they be ensconced for the day in a prison-like setting, with grates on the windows and heavy steel doors?

We have recently moved, and my 13 year old daughter attends a very small charter school with a partial homeschool program.  The curriculum focuses on independent studies and science, and a large percentage of her work is done at home under my supervision.  Critical thinking and personal responsibility make up the cornerstone philosophies of the school. We were very excited about this educational opportunity for her.

A couple of days ago, I read this headline by Heather Callaghan from Activist Post to my daughter:

School Pressured to Stop Making Kids Kneel Before the Principal

Imagine my shock when she told me, “We have to do that. It makes me feel weird.”

I quizzed her further.  Apparently, each time the teacher blows the whistle at the end of recess, the students are all supposed to face that teacher and kneel on the ground.  She told me that the first time it happened, the other kids were whispering to her, “Get down, Rosie, you have to kneel.”

Being the new kid, she did what the other kids did, but it didn’t feel right to her.

I asked her how it made her feel.

“Like I’m worthless. Like the teachers are better than me. I feel sort of embarrassed inside, but I didn’t say anything because it doesn’t seem to bother the other kids.”

The official response from the schools in San Bernadino, California was that the policy was there to maintain order and keep the children safe – they called it “positive behavior intervention.” Because of parental outrage, they have done away with this policy.

How do you create a victim?

How do you create a victim?  By teaching a person that things that make them uncomfortable must be done anyway. By teaching them to silence that inner voice that tells them something is wrong. By teaching them that they must submit to someone else’s control, regardless of how it makes them feel.

I told my daughter that she never has to do this again.  I said to stand politely or line up, but never should she do something that makes her feel degraded.  I’ve written a letter to the school board, the principal, and her teachers explaining to them that my daughter will not be participating in this policy.

I moved back to the United States with my daughter because I was seeking the liberty and freedom that I grew up with. Imagine my shock when Rosie told me that they are required to kneel when the whistle is blown at the end of recess.  Moving to America, the country that is the symbol for freedom worldwide, I was astonished that children are being taught to display such subservience to authority figures. This, however unintentionally, sets them up to be victims and teaches them that they are lesser than other people.

I have discussed this at length with my daughter. While I am sure that the intention is not to be demeaning or belittling, in our opinion, it is. So, Rosie has been instructed to stand quietly and respectfully instead of kneeling. It is not a practice that, in good conscience, I can allow my child to participate in.  I opted for a school that would teach her to think critically – with that in mind, I must respect her right to refuse to participate in something that makes her feel degraded.

Historically, in monarchies, subjects kneel to show their subservience to someone of a higher status – a king, nobleman, emperor, or tsar. In feudal times, peasants and serfs bowed to the lords of the estates.  Kneeling is a disciplinary measure in prisons and detainment facilities.  This method was used in concentration camps during World War II to subdue prisoners.

These examples all have one thing in common – genuflection has always been a display that meant one person was acknowledging the superiority of another. In many religions, a supplicant voluntarily kneels to show reverence to God. Subjects, prisoners, and slaves bow down to authority figures. A free man, woman, or child should never be compelled to display submission in this manner.

When children are exposed to this type of ritual at an early age, it programs them to find subservience acceptable.  It shuts off that little mechanism in their developing awareness that says, “This makes me feel bad.”  It teaches them that this is normal and appropriate.

Bowing down to another person should never be normal or appropriate in the United States of America.

Will my child continue her education at this school?  Yes, at least for now.  I want to teach her to do the right thing, and I believe the right thing is to resist when we see tyranny encroaching into our daily lives. By refusing to accept this as normal, we are by our actions deeming it loudly and clearly “unacceptable.” By simply walking away, our silence would allow this to continue happening to other children.

I’m delighted to follow up on this morning’s article.

I received an email in reply from the principal at my daughter’s school.  He stated that after reading my strong feelings about the matter, he can assure me the practice will no longer be continued at the school.