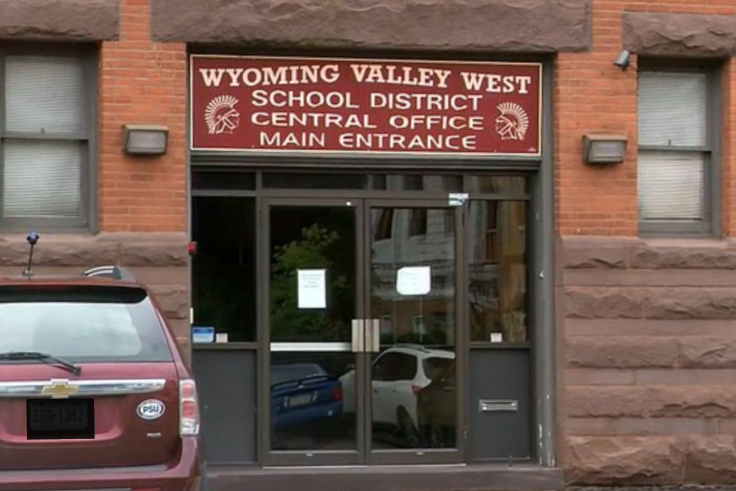 You’ve probably heard about the school board in Pennsylvania who sent a letter to parents with overdue lunch money tabs threatening to take their children away because of the debt. But did you hear that a local CEO offered to pay off every dime of the bills and the school board refused to take it?

They’d actually prefer to tear children away from their families.

Don’t make the mistake of thinking that this is about the money. It’s not. It’s about power. It’s about humiliating and terrorizing poor families.

UPDATE: After a massive public outcry and the power of the internet, the school board has opted to accept Todd Carmichael’s kind offer to pay the overdue lunch bills.

How this whole thing got started

Dozens of families opened the most shocking letter of their lives last week when the Wyoming Valley West School District, one of the poorest districts in the state, attempted to collect overdue lunch money tabs by threatening to have their children removed from the home if they didn’t pony up immediately.

The letter was only sent to the “worst” offenders – meaning those whose children had a meal debt of $10 or more.

“Your child has been sent to school every day without money and without a breakfast and/or lunch,” the 200-word letter read. “This is a failure to provide your child with proper nutrition and you can be sent to Dependency Court for neglecting your child’s right to food. If you are taken to Dependency court, the result may be your child being removed from your home and placed in foster care.” (source) 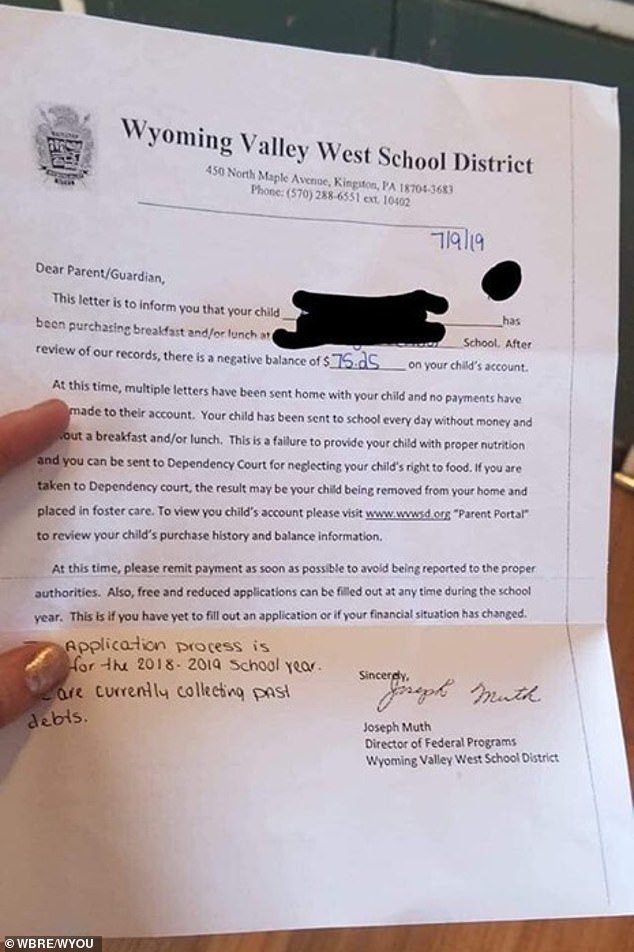 The letter was signed by Joseph Muth, director of federal programs for the Wyoming Valley West School District.  Joseph Mazur, the president of the district’s board of education, has defended the letter because “it worked.”

Mazur emphasized that despite some students not having enough money to afford breakfast and lunch, the school district still fed all the children.

“Every poor kid got a meal,” Mazur said. “If the Board of Directors was mean and cruel they’d just honestly say, ‘Stop the lunches,’ but we didn’t.” (source)

Mazur claimed that the school district’s $8 million budget was stretched thin and that they were desperate to claim the money owed by parents.

A philanthropic Pennsylvania businessman TRIED to step in.

If the school board is truly desperate, then why on earth would they turn down a businessman’s offer to pay the entire $22,000 debt?

Todd Carmichael, chief executive and co-founder of La Colombe Coffee in Philadelphia, says he grew up poor and knew what it felt like to be hungry. So Carmichael, in true voluntaryist spirit, offered to take care of the outstanding lunch money bills.

In a letter sent to papers in the Wilkes-Barre area on Monday, Carmichael said his offer was motivated in part because he received free meals as a child growing up near Spokane, Washington.

But Joseph Mazur, who says the school district is cutting every possible cost to stay afloat, turned down the offer.

Why would a desperate school district turn down a check for 22,000?

Because Mazur believes “the money is owed by parents who can afford to pay.”

Maybe they can, but maybe they can’t. Sometimes it can look like your financial situation is just fine, but meanwhile, you’re trying to figure out how to feed a family of 4 on one box of Kraft Macaroni and Cheese. It’s hard to get all your bills paid when you’re flat broke – sometimes even impossible. It’s terribly presumptive for him to believe he knows the inner financial workings of each family with a lunch money bill.

Furthermore, his refusal to accept Mr. Carmichael’s offer tells me that this isn’t about the money, as Mazur has proclaimed. It’s about wielding power over the parents of these kids. And about making them ashamed.

As for the Wyoming Valley West School District’s Coslett, who is also representing the board as their lawyer, it seems like shaming might just be part of the calculus. Referring to a letter received by a mother who owed $75, he told WNEP, “Where did that $75 go? Is it going to cigarettes? Is it going to alcohol? We don’t know. That’s right, we don’t know that,” he said. (source)

Now, don’t get me wrong. Of course, people should pay their bills and pay for their children’s lunches. But a state’s department of child welfare is not a collection agency, nor should it ever be threatened over an unpaid bill. Mazur is endorsing the kidnapping of children, regardless of the trauma, it would cause them, over bills as low as $10.

Keep in mind that some parents owe several hundred dollars, which might be tough to scrape up all at once. Even though Mazur is confident the parents can pay, the school district is so poor that next year’s budget contains funding for the breakfasts and lunches of every child in the school. Every single one.

Since the poverty level among students has risen in the district recently, new federal nutrition assistance is expected district-wide to cover meals for all students, regardless of their family’s economic means.

Mazur said that new support should stay in place for the next five years, and he is hoping the letter controversy will soon be put to rest. (source)

Not all officials are behind this effort.

This outrageous move is not supported by other local officials.

County officials criticized the threat of foster care placement, pointing out that the foster care system should be used only when children are abused or in danger, not as a weapon to collect money.

“The foster care system should never be viewed as a punitive agency or weaponized to terrorize children and families,” said Luzerne County Manager David Pedri, who noted that county officials have asked the school district to stop using the language contained in the letter. (source)

The Luzerne County Child Welfare Agency is not impressed either.

The offer to get the lunch bills paid still stands.

As for Mr. Carmicheal, he still wants to help.

Carmichael said Tuesday in a phone interview that his offer stands.

“I’m just going to hold on and I’m going to continue to be optimistic and see if we can’t do something,” Carmichael said. “Even if you’re a difficult person, we’re in. What can we do?” (source)

“I think this whole thing has just been blown out of proportion,” Mazur said. (source)

I don’t think the proportion of “this whole thing” will be significant enough while Mazur still has his job. And given the national fall-out from his approach, it might not be long before he discovers what unemployment feels like.