First NYC, Then DC…More Power Outages Are Looming: Could Your Area Be Next? 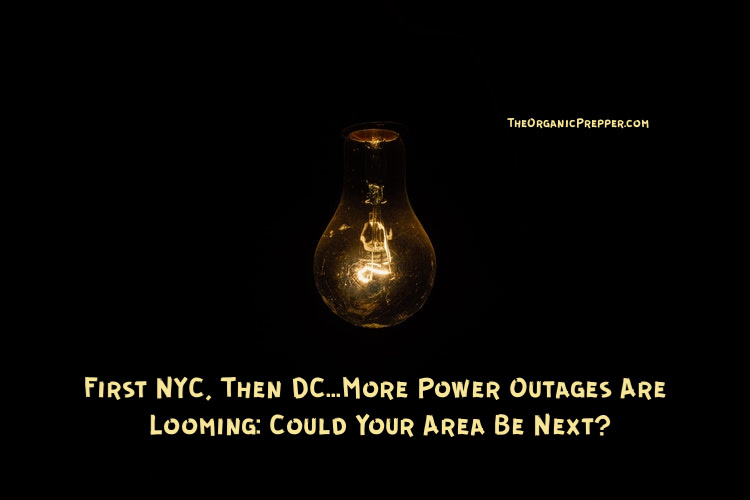 Anyone reading this probably knows that our American electrical grid is like a groaning, arthritic old man who just keeps on pushing through. We’ve had more than just this one article about massive grid failure.

It seems like we’re seeing more and more power outages this summer for “no reason.”

Last week there was a blackout in NYC.

Con Edison said the blackout that plunged parts of Manhattan into darknessSaturday night was due to a substation’s relay protection system that “did not operate as designed.”

The utility company said the faulty system was at its West 65th Street substation.

“That system detects electrical faults and directs circuit breakers to isolate and de-energize those faults. The relay protection system is designed with redundancies to provide high levels of reliability,” Con Edison said in a statement on Monday. “In this case, primary and backup relay systems did not isolate a faulted 13,000-volt distribution cable at West 64th Street and West End Avenue.”

Con Edison said the blackout that plunged parts of Manhattan into darkness Saturday night was due to a substation’s relay protection system that “did not operate as designed.”

The utility company said the faulty system was at its West 65th Street substation.

“That system detects electrical faults and directs circuit breakers to isolate and de-energize those faults. The relay protection system is designed with redundancies to provide high levels of reliability,” Con Edison said in a statement on Monday. “In this case, primary and backup relay systems did not isolate a faulted 13,000-volt distribution cable at West 64th Street and West End Avenue.” (source)

Many news outlets noted the interesting fact that the blackout was on the anniversary of a much lengthier blackout in 1977.  Some Twitter users speculated that it could have something to do with the Epstein fustercluck.

Thousands were without power in Washington DC a couple of days ago.

PEPCO, DC’s electric company, is trying to determine the cause of a power outage in Northeastern DC that left thousands in the dark on Monday. According to a company spokesperson, this outage, too, was an equipment failure.

And we’ve got PG&E just turning people’s power off in California.

Fingers have been pointed at PG&E, the power company in California, for causing the Camp Fire that took the lives of at least 85 people. In fact, further investigation showed that poor maintenance by PG&E had been the cause of at least a dozen horrific wildfires over the past few years.

A recent report said the company had not followed state laws:

This is the second investigation to back up widely reported claims that PG&E’s poor maintenance and management of its power lines, combined with high winds and dry vegetation, sparked some of the more than 170 wildfires reported across the state in October.

Late last month, Cal Fire found PG&E negligent in its vegetation management duties for three of four fires it had investigated in the Sierra Nevada foothills, which caused no fatalities.

The new report accuses PG&E of violations of state law for a much larger set of blazes. (source)

PG&E’s response? It wasn’t to better maintain power lines. Instead, during times in which they deem the risk of fire is high, they’ll just shut off electricity to millions of people during triple-degree weather.

According to a press release, the campaign’s purpose is a “call to action for all Californians to take important steps to get ready before the 2019 wildfire season, such as creating a thorough emergency plan and updating their contact information with their energy company.”…

…The change stems from PG&E’s expansion of its shut-off program scope to include higher-voltage transmission lines like the one suspected of involvement in the start of last year’s Camp Fire, the deadliest and most destructive wildfire in California’s recorded history. In February 2019, PG&E filed for bankruptcy protection, citing potentially $30 billion in liabilities after two seasons of historic wildfires. The company admitted a power line failure was the probable cause of the Camp Fire that killed 86 people and destroyed thousands of homes. In a filing with federal regulators, PG&E expressed doubt about its ability to remain in business…

…Even for those without special medical needs, power shut-offs can create other problems as Californians seek ways to deal with what some fear could be days and days of blackouts. (source)

Imagine the hardship of living in a climate of over 100 degrees Fahrenheit and not even being able to turn on your ceiling fan to move the air around a little. Then imagine you’re diabetic or you have a heart condition or you’re elderly. It’s possible that PG&E will be responsible for just as many deaths by cutting power as by leaving it on and not maintaining their equipment and the brush around it.

And other cities have been warned that to expect more power outages.

Last week’s outage that shut down transportation, left hundreds of people stuck in elevators, and had everyone dealing with sweltering temperatures might not be a single incident in NYC according to Jay Apt, a professor and co-director of the Carnegie Mellon Electricity Industry Center.

There is always high demand in the summer – air conditioning is very power intensive and you will always have some failures of equipment,” Apt said. (source)

He warned that cities such as New York, Chicago, and Washington DC should get prepared for more outages during the impending heatwaves.

With heat and humidity as intense as predicted, Con Edison is prepared for “scattered outages” in Manhattan, and parts of Brooklyn, Queens and the Bronx, spokesperson Allan Drury said Tuesday.

Manhattan is served exclusively by underground delivery systems that inevitably heat up as the ground warms, and those systems are put under further strain by increased demand for power, Drury said. (source)

The DC area has not ruled out power outages during the upcoming heatwave.

Christina Harper, a spokesperson for Pepco, said the city’s primary public utility company is preparing for the possibility of power outages, although they are not necessarily expecting them.

Temperatures in the D.C. metro area are expected to reach the high 90s this week, according to the Weather Channel, and could top 100 degrees on Saturday.

“We are ready,” Harper said. She encouraged all customers to download the Pepco app, which will allow them to easily report a power outage and access an interactive map of local outages. (source)

Officials from ComEd in Chicago are also preparing for extreme temperatures – Friday is forecast to be the hottest, with a high of 96 degrees, according to the Weather Channel.

When you have extreme weather of any kind, it can put stress on any system and can cause outages,” said Terence Donnelly, the company’s president and chief operating officer. “We’re watching the pending hot weather moving into our system very closely, we have scheduled our emergency response center to open up and we have scheduled extra crews scheduled to work extra hours.” (source)

Of course, big cities get all the press but it’s important to note that it isn’t only a problem you face in big cities (or California.) Any power company whose equipment cannot meet the demand asked of it could see power failure.

So how do you survive a hot weather power outage? Here are some tips from The Blackout Book, which you can get immediately in PDF format.

Here are some ways to keep a little bit cooler when the grid is down:

Scott Kelley from Graywolf Survival has super-easy instructions for making your own air conditioner that will help cool down one room as long as the power is still on. His design doesn’t require ice, it’s VERY budget-friendly, and he offers suggestions for alternative power, as well. (source)

Here’s an excerpt from my book, Be Ready for Anything, which gives you a more thorough overview of surviving a summer power outage. As far as long-term power outages are concerned, my recommendations are decidedly low-tech.

These summer blackouts seem to be happening a lot more often.

As our infrastructure continues to age, it seems to me like these miserable summer blackouts are happening more frequently. And it isn’t just the power company’s fault. We demand more and more comfort, keeping our homes cool.. And if the businesses we visit aren’t cool enough, we won’t shop there – we’ll look for more comfortable environments.

I guess the most important thing to remember is that one of these days, the power just might not come back on. That may sound far-fetched, but look how long Puerto Rico was in the dark after Hurricane Maria. You can come up with all sorts of arguments about why we here on the mainland are better off – and you’d be right – but also keep in mind that after Superstorm Sandy, parts of New York were still without power 94 days after the storm hit. And not just a couple of folks – we’re talking almost 2000 households. You’re deluding yourself if you don’t think, with our crumbling infrastructure, that a long-term outage is possible.

Or maybe even likely.