Now the Czech Government Is Warning Citizens To Stockpile Food 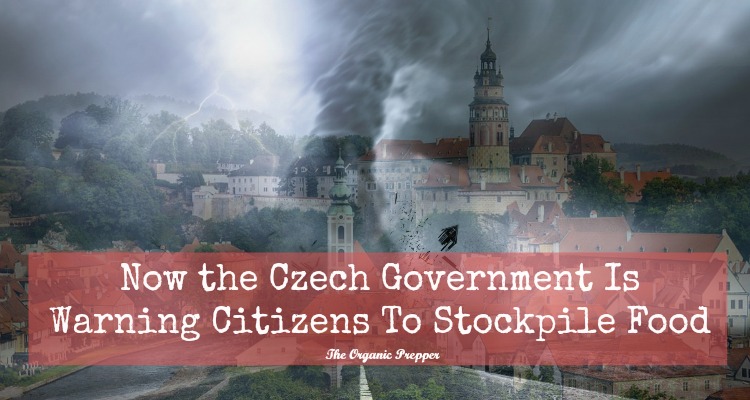 Just days after the German government advised citizens to stock up on food and water, the Czech government has followed suit.

Hello? HELLO??? Can you hear me now???? Something is clearly hurtling down the pipe.

Czech news channel CT24 broadcast a message from the government telling citizens to ‘prepare for the worst’.

Czech media sources are reporting that in the event of a national crisis, the food needs of the country will not be met. They’ve never really recovered from the failed Communist government there, and the Czech Republic is already beset by food shortages.

In the video below, Czech resident Steven Ben-DeNoon  told Israeli News Live that the Czech government is telling citizens to “be prepared for the worst case possible scenario” such as a large scale terrorist attack or snuclear disaster.

Europe is coming apart at the seams and there seems to be nothing that the governments can do about it. They’re giving fair warning: the citizens will be obligated to provide for their own needs.

You’re completely on your own in a disaster

Much like the situation in Venezuela, people will be completely on their own.

This January, the government told citizens that they would need to produce their own food. The Ministry of Urban Farming was created to oversee this. While self-reliance sounds great, it isn’t so great in Venezuela. Just so the urban farmers don’t get too self-reliant, a registry of the crops and livestock will be required. (And obviously, they’ve already proven that they have no issue forcing farmers to hand over what they’ve produced.)

As I’ve written many times, in a true disaster, you will be completely on your own.

It’s essential to note that once the crisis arrives,  there is little people can do to rectify their situations. If they aren’t already quietly prepared, they are completely at the mercy of the government and must comply to whatever strictures their leaders wish to put on them.  It is absolutely vital to put back supplies like emergency food and filtration devices well before the general public is aware that a crisis is pending. You have to learn to raise your food well before you might need to live on the fruits of your labor, because successful farming is absolutely not an instant gratification kind of thing.

If you do things now to increase your self-reliance, you will fare far better when our own government washes its hands. Most of the people reading this blog are probably the type who prefer to be independent. We’ll get through it, but those who buy their food strictly from the store, who live paycheck to paycheck, and who have no practical skills will suffer greatly. And that, itself puts the independent among us in danger.

Because they were not prepared for self-reliance, Venezuela has now devolved into complete societal collapse. People are starving to death. They’re butchering zoo animals. Crime is ever-increasing.

Because of the ineptitude of the majority, no matter how much food you store or how much you can raise yourself, in a true crisis the ability to defend your food and operations will be essential.

There are signs all around that something is coming.

Governments around the world seem to be preparing for war. President Obama seems to be deliberately provoking one. Incidents of civil unrest are at an all-time high in America.

In the series, Game of Thrones, they say with great foreboding, “Winter is coming.”

It appears that a dark, cold stretch is approaching our society too. And signs around the world indicate this one is going to be a doozy.