Why Is the German Government Telling People to Stockpile Food, Water, and Cash? 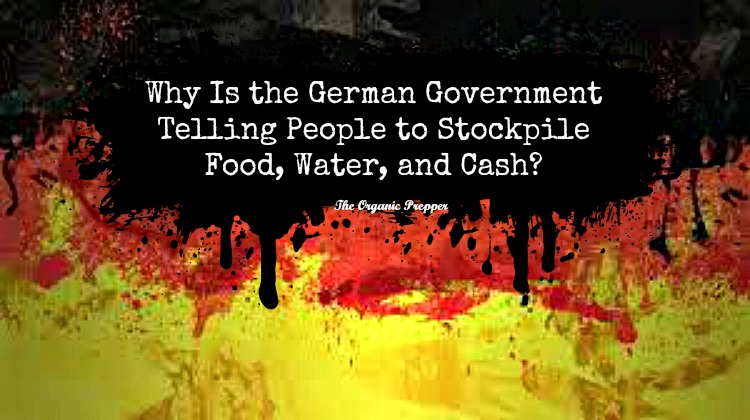 The government of Germany is advising citizens to get prepped. Increased terror attacks from refugees have put the country on high alert, and a new “Concept for Civil Defense” will be presented on Wednesday.

This translated report explains that German citizens will be required to take responsibility for themselves with a 10 day supply.

“The population is stopped, hold up a personal supply of food of ten days,” the newspaper quoted from the draft of the concept, which was already known in essential parts in early August. According to the report, the population should be able to protect themselves in an emergency before calling government action to ensure an adequate supply of food, water, energy and cash. Therefore, the population should also be encouraged to reproach for a period of five days for each two liters of drinking water per person per day…

…The recommendation for stockpiling to citizens is only one of many elements of the 69-page concept. It reads aloud FAS with reference to the threat assessment of the federal government in the new white paper , “that an attack on the territory of Germany, which requires a conventional defense, play” was. Nevertheless, it was necessary, “nevertheless to such sufficiently prepared not fundamentally excluded for the future development of life-threatening”.

These include a reliable alarm system and sufficient capacity in the health system.

Who can help but point a finger at the immigration crisis?

When German Chancellor Angela Merkel threw open the doors to hordes of Syrian refugees (and by hordes, I mean  over 1.1 million refugees arrived in Germany in 2015), an epidemic of rape and violence against the German people began. Gun ownership in the country has skyrocketed in the wake of the rapes in Cologne on New Years Eve (but don’t worry – it was all just a “game” to the refugees) and Islamic terror attacks that are growing in frequency.

Of course, the LA Times says the concern about Islamic terror attacks in Germany is greatly exaggerated. And in a recent interview,  Merkel refused to take the heat, despite the fact that her own advisors blame the unchecked flood of migrants.

At a political meeting on Wednesday in her home state of Mecklenburg-Vorpommern ahead of a regional poll next month she was asked if ‘terrorism had come to Germany with the refugees’.

The chancellor, whose approval ratings are dwindling on the back of public fears about increased terror risk, said: ‘The phenomenon of Islamic terrorism of IS not a phenomenon that has come to us through the refugees but one we already had.’

George Soros has blamed Merkel’s immigration policies for causing the chaos in Germany. Ironically, Soros himself was recently outed as being the puppetmaster behind the refugee Trojan horse that has destabilized Europe.

When the warnings start, it’s already too late.

It happened in Greece and Venezuela both, and it’s highly possible that we’re about to watch history repeat itself.

Will Germany become the next falling domino in the collapse of the Western world?

The lesson that we can take from this is that being prepared far in advance of a collapse is the wisest course of action. If you stock up on emergency food, water, and other vital supplies before the crowd, you’ll do so at better prices with better options. Last summer, our own government issued 2 warnings to the American people to get prepared, but very few people took it seriously.

Don’t wait until it’s too late.