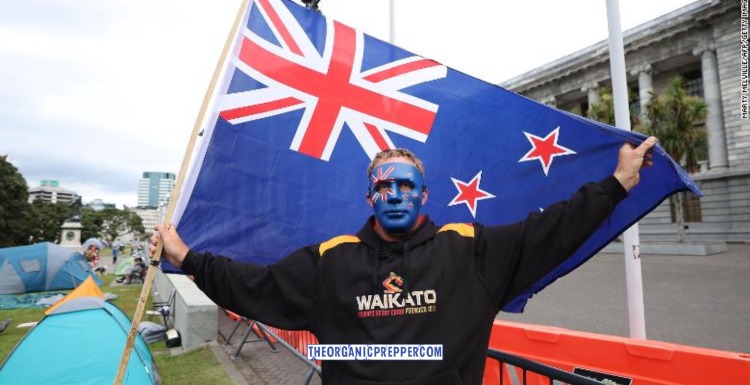 February 7, New Zealand citizens clamoring for their inherent right to freedom absolutely saturated the area around Parliament, as thousands filled the area. And, like Canada, New Zealand’s Prime Minister would not discuss matters with them. Jacinda Ardern refused to meet her fellow citizens, claiming that not only did she have “other priorities” to attend to, but that “this too shall pass.”

No arrests had been made at this time, though.

Two days later, police had made over 120 arrests at the Freedom Convoy, stating that people were “trespassing” and were guilty of “obstruction.”

The New Zealand Police tweeted out at this time, “Wellingonians have the right to conduct their lives and go about their business without the interference of ongoing unlawful activity.”

Throughout the past two years, New Zealand has had incredibly tight travel restrictions. Many Kiwis have ended up stranded away from home within their own country, as a result. Families have been separated, forced apart by those who claim that they are serving the public’s interest.

New Zealanders are forced to show their “papers” anytime they enter a church, attend a rugby match, or go to many other venues as well. The Kiwis are fed up.

And now they’re being punished for saying ‘no.’

Parked vehicles are being given traffic tickets, drones and security cameras (most likely with facial recognition software) are being used to identify protestors, and anybody arrested is being told they cannot “lawfully” reenter the protest, as having been served trespassing papers, they would then be in violation of their trespassing notice.

What is strange about this though is that New Zealand has a long history of protesting on Parliament grounds. It’s never been a problem before. Police even explicitly stated at one time that the Freedom Convoy’s presence did not constitute a trespassing violation.

Even Jacinda had previously stated, “People often protest on the front lawn of Parliament. It is a part of New Zealand.”

After it was announced to the protestors that they were now trespassing, they responded in unison by engaging in the Maori haka, a traditional war dance.

Perhaps, it is the stated goals of the New Zealand Freedom Convoy that has caused the sudden U-turn in policy by the police.

According to the Convoy, papers have been filed for the arrest of Health Minister Andrew Little. He is being presented with charges of manslaughter by the Freedom Convoy, and anybody who has evidence of a jab injury within New Zealand has been encouraged to provide their evidence for their claim.

According to Section 35 of the Crime Act in New Zealand, if the police fail to arrest Andrew Little for manslaughter, citizen’s arrest will be lawful. As the New Zealand Freedom Convoy’s site states,

“Section 35 of the crimes act allows citizen’s arrest without a warrant on any person that’s causing harm in which the penalty in the courts would be greater than three years. The penalty for man slaughter in the courts is 50 years. Citizens will be fully validated and under protection of the law to arrest Andrew Little.”

More severe methods are now being used against the New Zealand Freedom Convoy.

After the initial arrests, the sprinklers around Parliament were turned on to the “soak” setting, rather than their normal “spray” setting, and have been left on since. This is being done in an attempt to make the protestors so miserable – or to suffer potential hypothermia – that they have no choice but to leave.

Protesters responded by beginning to show up with raincoats, placing traffic cones over the sprinklers, and by digging trenches to reroute the streams of water away from the bulk of the Freedom Convoy.

Shortly afterwards, blaring music was played on repeat with the hopes of driving the protestors away. “Baby Shark,” “My Heart Will Go On,” and Barry Manilow songs have been blasted at the protestors. If these songs are being played loud enough, this could technically qualify as an acoustic weapon being used against the Kiwi people.

Protesters have responded by singing and dancing along with the music.

Trevor Mallard, the Speaker of Parliament, said of the matter, “No one who is here is here legally, and if they’re getting wet from below as well as above, they’re likely to be a little bit less comfortable and more likely to go home.”

Mallard would go on to say, “Some people have suggested we add the vaccine in the water, but I don’t think it works that way.” Whether he was referring to the sprinkler water being tinkered with, or the protestors being concerned their drinking water supply was being tinkered with is unclear.

There is a strong possibility he was referring to a tweet that had been floating around the internet, allegedly from The New Zealand Herald, stating that “The emails between government officials and multiple local councils appear to discuss the possibility of introducing the covid vaccine into city water supplies in areas where the vaccination rates haven’t reached 90%.”

Reuters has determined that the tweet was a fake, and The New Zealand Herald denies ever having released such a tweet.

Things have only escalated in New Zealand, and they’re bound to continue in the near future.

To date, approximately 0.00106% of the New Zealand population has died with a diagnosis of Covid.

Do you think this will continue to spread?

Do you think other countries will stand up for their rights? Do you think they’ll withstand the government’s efforts to shut down the protests? Let’s talk about it in the comments.