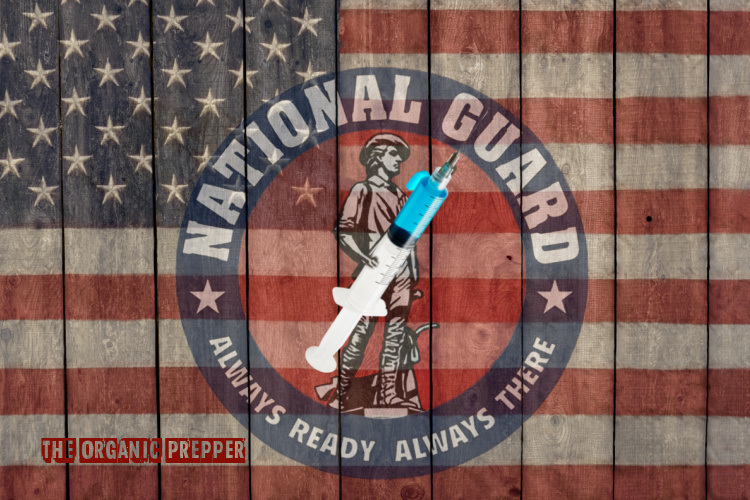 Last year, “conspiracy theorists” discussed the possibility of soldiers going door to door for a mandatory vaccination scheme. Any mention of such – along with a COVID passport – was quickly discredited as something only misinformed fearmongers would spread.

Then in 2021, states began setting up soldier-manned clinics

Within the first month of the vaccine becoming available, we saw states across America activate their National Guardsmen to inoculate the populace. For example:

Illinois, Indiana, Rhode Island, and Connecticut were some of the states receiving such treatment, with National Guard soldiers manning “vaccination clinics” throughout their boundaries.

In a move that reeked of information, The Organic Prepper discussed Alabama scheduling their National Guard soldiers to set up clinics throughout rural locations as of March 2021.

And now? Soldiers are going door to door

By June 2021, North Carolina residents had National Guard soldiers in full uniform show up at their homes. To my knowledge, Smithfield, North Carolina, is the first region within the United States to perform such measures. You can see video proof here.

Josie Hines was one of many Americans faced with such measures. She had a health official with a clipboard show up at her front door. And guess who was standing behind that health official—three uniformed National Guard soldiers.

What happened to the shots needing super cold storage?

Were we not initially told they needed subzero temperatures to remain viable? Is such even possible for bands of workers trekking through the Southern heat in June? North Carolina doesn’t seem to be alone in these types of measures, however.

It appears as if Oregon may be the next state on the list to implement such measures. After Joe gave his speech about, “Now we need to go community by community, neighborhood by neighborhood. And off-times, door-to-door, literally knocking on doors,” it seems like many are happy to carry out such actions.

Jason Davis, a public information officer with Lane County Public Health in Oregon, had this to say:

“In the state’s fourth most populous county, which includes the college town of Eugene, National Guard members may be among the teams designated to persuade people to take the shots.”

“We’re looking to bring on a team that could be door-to-door.”

So, what IS the end goal here?

To get more Americans to take the jab, of course. Apparently, the best way to convince Americans is to send soldiers to their doors.  But don’t worry. They just want to talk to you.

In response to questions about this policy, Jen Psaki said the aim was “to get remaining Americans vaccinated by ensuring they have the information they need about both how safe and accessible the vaccine is.”

April Holland of the Benton County Health Department said, “There’s a spectrum as to reasons why people have not been vaccinated for COVID-19 yet….some people are uninterested and would take a lot of convincing on our part to get a vaccine.” [source]

But, how do they know where to send the soldiers?

HHS Secretary Xavier Becerra has said it’s absolutely the right of the government to know who has been vaccinated and who has not. Therefore, isn’t it plausible that the government would soon send troops to the homes of those refusing to get the shot due to the presence of a list?

Colorado seems to have taken such an argument in stride. There are already reports coming out of Colorado of health workers calling “vaccine-hesitant” individuals who have not yet received the shot.

How do they know who to call?

How long before the US begins forcibly vaccinating people?

Within Western Australia, armed men can now physically restrain you, remove your clothing, and plunge the shot into your arm.

Within the US, we have people arguing for the same. For example, Harvard law professor Alan Dershowitz said, “if you refuse to be vaccinated, the state has the power to literally take you to a doctor’s office and plunge a needle into your arm.”

Also, we have some people who argue for the “unvaccinated” not to work or have access to children. [source]

We reported earlier on all the ways people could be “encouraged” to get vaxxed – now it seems we’re going way further than that.

Where does this end?

Upon hearing of Biden’s plan for door to door, SC Gov Henry McMaster said in a letter to the board of the South Carolina Department of Health and Environmental Control:

“A South Carolinian’s decision to get vaccinated is a personal one for them to make and not the government’s. Enticing, coercing, intimidating, mandating, or pressuring anyone to take the vaccine is a bad policy which will deteriorate the public’s trust and confidence in the State’s vaccination efforts,” the letter continued.

“The prospect of government vaccination teams showing up unannounced or unrequested at the door of ‘targeted’ homeowners or on their property will further deteriorate the public’s trust and could lead to potentially disastrous public safety consequences.” [source]

What would you do if soldiers showed up at your door?

Let’s discuss it in the comments. Anyone with information about our legal rights in this situation is extremely welcome to chime in.