Mayhem in Minneapolis: Riots Erupt After Police Shooting and a Not Guilty Verdict Likely in Chauvin Trial (VIOLENT CONTENT WARNING) 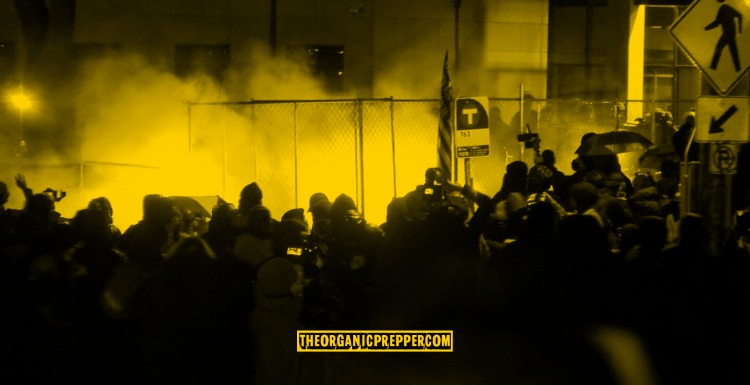 After another police shooting, fiery Minneapolis riots have erupted across the city. Meanwhile, the verdict in the case of George Floyd’s death draws near and the prosecution’s case was weak.

For nearly a year, America was close to the brink of political and racial civil war. Then, COVID lockdowns and state tyranny took over the nightly broadcasts of riots, flashmobs, and protests. With Trump gone and Biden’s Administration launching its war on many rights Amendments to the Constitution, the slow-boiling civil war is heating back up again.

Another man killed by police in Minneapolis sparks riots

Once again, Minneapolis is the center of violence and riots. However, this time, it is not George Floyd’s death (although that will soon play a role) but the killing of another black man by police, Daunte Wright that has sparked riots in the city.

Wright was pulled over for expired tags and attempted to escape arrest. One police officer (who frantically screams “tase him!!”) removed her pistol and shot Wright once, killing him. The officer claims she thought she had her taser, not realizing she was holding her firearm. The police department is ruling it as an “accidental discharge” of the weapon that “resulted in the tragic death of Mr. Wright.”

Somewhere between “She woke up that morning to murder a black man” and “He shouldn’t have had warrants or resisted” is the truth. I am not trying to defend or convict the police or Daunte Wright, determine the reason for his death, or discuss how to proceed in the aftermath.

My focus is on what is taking place yet again on Minneapolis’s streets and perhaps set to spread across the country as it did in the wake of George Floyd’s death and subsequent incidents in other areas.

In case you missed it, Minneapolis is in flames all over again

Damage was reported, and arrests were made as unrest continued for a second night after the shooting death of 20-year-old Daunte Wright during a traffic stop in Brooklyn Center.

Wright was shot and killed by a Brooklyn Center police officer Sunday. The Minnesota Bureau of Criminal Apprehension identified the officer involved as Kim Potter.

Meanwhile, a KSTP crew reported seeing some damage, including damage to a Dollar Tree in Brooklyn Center.

Part of the reported damage was indeed looting. But what the media did not show is the violent racism displayed by protesters. Mobs attacked anyone who is white simply for being in the area.

Usually, this would be called lynching. In 2021, it’s a “mostly peaceful protest.”

Upon pointing out a white person, one rioter screams, “There’s one right here! You want me to jump him?” with responses of “He white! Beat his shit! Bitch! Take him out of his car! Get him out! Beat his ass!”

What will the reaction be if, amid the Daunte Wright riots, Derek Chauvin is found not guilty?

I can sum it up in one word: MAYHEM

Derek Chauvin may soon be acquitted for the murder of George Floyd. Again, this is not to comment on whether or not Chauvin is a murderer, innocent, or something in between. It is not a comment on Floyd either. But consider the reaction from the same rioters in Minneapolis who are currently terrorizing the city if Chauvin is found not guilty!

Regardless of your opinion on the matter, a not guilty verdict is the most likely one to be rendered given Chauvin’s profession and the fact that the prosecutor has failed miserably to prove his case of murder beyond a reasonable doubt to an unbiased jury.

And the trouble will NOT just be in Minneapolis.

Minneapolis is not Las Vegas. What happens there doesn’t stay there

Don’t expect the violence to stay put. Like the Floyd riots, the violence will spread from city to city. However, this time, there is an administration that previously defended the riots on the campaign trail. All while labeling a bunch of activists storming the capitol as an insurrection.

Are you prepared for violence and civil unrest? Here’s how to quickly prep your home or apartment for potential chaos.

Americans had better realize that they are on their own when it comes to economics, finance, food, and security in the coming weeks and months. I’d suggest you prepare as best you can and immediately rebuild your networks with friends, family, and any other kind of support system you have. Things are about to get rough.