When Selco’s Urban Survival Course for Women was over, I was both exhausted but wishing it could go on for a few more days. I learned more than I could possibly share in one article. As well, it would be impossible to portray the experience if you aren’t actually standing there in the ruins.

Selco has written about this before but learning first hand what it feels like to have to search for something of lifesaving importance when time is short has really impressed the lesson upon me.  I now carry my everyday items in a 1-quart Ziplock bag that can easily be moved from purse to purse, or even put in the pocket of the right jacket. (Not including my gun, of course. I can’t carry that out of the country, so for the purposes of this article, just pretend that’s snugly in my holster)

What’s in my layer one kit? It’s very, very simple – the things I would never want to be caught without that are of urgent necessity.

Is that all I need in an emergency? Definitely not – I still want shelter, something in which to cook or boil water, a warmer layer, extra socks, etc. But in most situations, I could get by for 24 hours with the items in the kit above albeit not very comfortably.

The key is that there are certain things which should be on your person at all times in the event that you lose your bigger kit in some way. My initial layer one was missing the Israeli bandage and after our lesson, I tucked one in my fanny pack. It was a good thing because the next exercise was suddenly treating a traumatic wound. If I’d had to dig through my bag to find that bandage, my buddy would have potentially bled out while I was throwing gum wrappers and lip gloss out to locate what I needed.

Several of the other ladies who came to the course brought some very nice gear and even the instructors were excited to check it out. Unfortunately, nearly all of the fancy stuff was not worth the real estate in a backpack.  I wrote about this in greater detail here.

One spectacular failure was a fire steel and knife. No matter what she did, the woman using it could not get a spark. Then, Toby, Selco’s co-instructor, came over to help and he also had difficulty. It turned out that the knife she was using had a type of grind on the spine that made it virtually impossible to use as she wanted. Worst of all, she had told the person who sold her the knife that this was the reason she was buying it. The person was either not knowledgeable or he just didn’t care that it simply would not work. 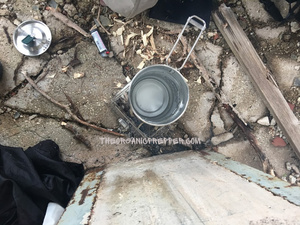 That wasn’t the only one though. My friend had a very nice little camp stove that she assembled on the fly in an abandoned building. We got a fire lit in it but the openings for tending the fire were far too small. (We were boiling water from a puddle in it.) It took far longer to build a fire and bring water to a boil in the camp stove than it would have using the ground and two rocks to hold our container over the fire – and bonus – that would not have weighed anything.

The real thing I took away from this is that it’s not that sensible to use fancy equipment when a 99 cent lighter or something you can find in the environment would do. Think of it this way: if you can have on you a knife and a fire steel, you can have a lighter. Don’t make things complicated if you don’t have to – in a survival situation, surviving will be hard enough.

Your choices, of course, will differ based on your presumed environment. There are some environments in which finding something to use as tinder would be difficult while other environments would be rich with such items.

#3 – Being stealthy takes a lot of practice.

One thing I really bombed at was being stealthy. We worked on how to walk through a potentially noisy environment without making a sound.  (Or at least not much of one.)  As I mentioned previously, I got a terrible cold on day 2 of the course so I was coughing and sneezing. (It’s hard to be sneaky when you are hacking up a lung.)

But as much as I’d like to blame it on being sick, it wasn’t that – apparently, I just walk like a bull in a china shop. Fortunately, this is something I can work on at home. We got a lot of great tips about being quieter and stealthier, and as I always say, Rome wasn’t built in a day.

You may not think that stealth is an important skill. I can honestly tell you it never crossed my mind before this course. But imagine a scenario in which there are “bad guys” who want to hurt you or find you. Being able to escape could depend on your ability not to make a sound while walking through the forest or some kind of debris. Alternatively, if there’s something you require or a place you need to get to, and people are camping between you and that desired location, you’re going to want to be able to sneak your way around them without alerting them to your presence.

#4 – Stealth takes time a lot of time and awareness.

When you think about being stealthy, you may be thinking that it’s just about being quiet, but it’s about far more than that. It’s about 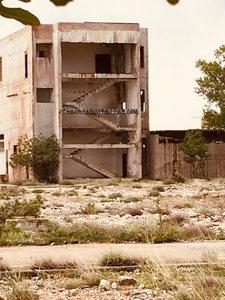 blending into concealment, using environmental noises as cover for your movements, inching your way across noisy terrain, and being patient enough to wait for your moment to move safely.

Another thing to consider is what you’re wearing. Are you wearing clothes that are sturdy enough to protect you from the environment if you’re spending time belly-crawling across a more open space?  Are you wearing dark clothing but trying to hide against a giant white wall? (Guilty!)  Think about what you have on and in what areas you will blend the most discreetly.

Night time is probably the best time to be stealthy because the cover that darkness gives you. However, you might still need to take an extremely long way around your target in order to blend into the bushes and not be spotted by some sharp-eyed person.

Previously, when Selco wrote articles about how long it could take people to sneak from Point A to Point B, I didn’t really get it. But now I do. It can take an hour or more to cover 40 feet if stealth is of lifesaving importance and you have to be both patient enough and fit enough to do it.

Watching pros like Selco and Toby move silently and patiently was an education unto itself.

#5 – You probably need to be more fit than you are.

I walk most days with my two dogs, but to be quite honest, this isn’t nearly enough activity for survival tasks. I’d recently had major surgery so I wasn’t able to do much lifting at all. However, there were other things that I need to work on that had little to do with either being under the weather or recovering from surgery. Athleticism is clearly not my forte but thankfully, it’s something I can improve.

There are some very specific movements that are important.

The good thing about this is that I now have an idea about what (aching) body parts need the most work. I need a gym and CrossFit STAT. I wrote more about fitness here.

Most of us, myself included, plan to stay home and hunker down with our preps and our gardens and our livestock when the SHTF. But one thing I learned in Croatia and Bosnia is that it might not be an option.

The key word here is “survival.” Sure, you could go down in a blaze of glory defending your home from 40 people who want to haul you off, rape the women in your family, and steal your stuff. But even if you take out a few of them, what did you win? There are times when retreat is the answer.

Maybe people like you are being rounded up and put into horrific camps. It happened in Bosnia to people of certain backgrounds. Maybe the hordes want your house and there are too many for you to fight off.

Is your stuff really worth your life? Or do you want to survive to fight another day? Me? I want to survive. Yeah, I’m 50 years old, a bit out of shape, and remarkably naive about certain aspects of SHTF living. But I’m going to do everything I can to survive and help my family to survive, too. If that means leaving home with only what I can carry – or only with Layer 1 – or even with nothing at all – then I’m leaving.

It’s a lot better to learn this stuff now instead of after the SHTF.

The most important takeaway is how much stuff I don’t know or can’t do. Never have I felt more compelled to channel my inner Lara Croft. I’m thankful I was there walking up and down a billion flights of stairs for a couple of weeks before the course or I would have been in even worse trouble.

Nothing is more humbling than failure – ahem – a learning experience. You learn so much more from the things you thought you could do but can’t than simply doing the same thing over and over again. As well, it never occurred to me I might need to clear an abandoned building. Or that you can’t just barge right in – it can take hours to do recon on it. Or that I would have to crouch and be stealthy to do it.

Do you know what it would mean if I waited to learn that when it actually does hit the fan? I’d have all these preps and Susy Homemaker skills and I’d be too dead to use them. Prepping and survivalism are two different skill sets and you desperately need both of them. No matter what your age or your fitness level, there are things you can do to learn these skills.

In my next article about this course, I’ll tell you about the changes I’ve made to my plan and about how I’m training based on what I learned.

Excuse me now while I go stalk my cat.

The 6 Components of Creating an American Free Market Network