The Most Important Gift You Can Give This Holiday Season 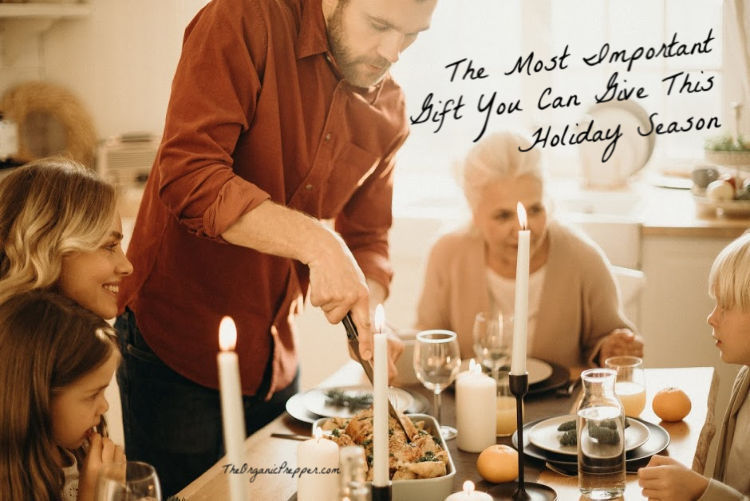 It’s the second week in November, and for many, the holidays are upon us. Shopping has already begun for little things, more than a few stores seem to have forgotten Thanksgiving altogether and, by the end of this month, Black Friday will darken many doorsteps, quite possibly causing damage to bodies as well as wallets.

People will be shoving and pushing, snatching and grabbing, spitting and hitting, stealing and running, and those who didn’t venture out into the fray are waiting. Waiting with knowing, secretive smiles, planning their weekend so they’re set for Cyber Monday where they’ll be on their computers, bidding and searching, ordering and buying, this gadget and that doohickey, their credit cards numbers flying here and there, their addresses, names, date of birth; all out there for the taking. And there’ll be certain someone just quietly sitting and waiting to do ‘the taking’.

The holiday frenzy will then be in full swing with invitations to gatherings, parties, and dinners, and plastered on every television in the world will be dazzling advertisements for dazzling gifts all at dazzling prices. Then soon after come the ribbons and paper, name tags and packages, and people racing from here to there, until it all seems to pause for a just brief immeasurable moment… As if suspended in time… And for that time the earth appears to be silent – still – almost as if it’s holding its breath…

And then, maybe sometime before the sun is even able to peak above the horizon, there is a stir and a yawn, then a peep. The world comes alive again, bit by bit as the planet continues to turn, and the paper and ribbons are ripped to shreds, flying through the air as gifts are unwrapped, and the contents of platters and casseroles and wine bottles are emptied and engulfed, with the cutlery and cookware eventually stacked haphazardly in the sink. New Year’s Eve comes and goes, and the coldest part of the winter sets in.

I realize anecdotal stories are pretty useless, mainly because they are seen and presented with the perception of the one who experienced it, but in this case, I ask that you continue reading and take what I write to heart – even if you have to put your own spin on it to make it mean something.

I was a young wife and young mother. I had a high school education and a small college degree but had decided I liked being a wife and mother and so put all that business stuff aside for my kids and husband. I never regretted it once. I wasn’t the most insightful person back then though, nor the brightest. While I hope I did the very best I could in my marriage and in raising my kids, I failed other people. My Grandmother was one of them.

She was the typical grandmother of old; white hair that was always fixed up with rollers at night and hairspray in the morning, and she usually wore a simple but pretty printed dress with an apron, white socks, and plain brown shoes. And she always smelled of roses and had a smile on her chubby face. She was a stern grandmother but a compassionate and loving one to me and to my children. I was her only granddaughter; my children her only great-grandchildren. And I didn’t have a clue how important that little fact was. Like I said – I wasn’t too bright.

We lived out in the country in a rental house at one time, and my grandmother had moved into an assisted living apartment. See, my granddaddy had passed and the big old house that I always knew as “Grandma’s House” had been sold because Grandma couldn’t take care of it all by herself. That should’ve been my first clue but it wasn’t. I was too busy ‘living my life’ to pay attention.

One holiday season we had agreed to make the two-hour drive to see my husband’s parents for Christmas. My Grandma asked if we could stop and have dinner with her later that day and, dimwitted as I was, I quickly agreed over the phone, thinking we’d just pop in and say hi to her before going back home – no big deal. I know you’re probably already thinking at this point how stupid I was, and you’re right – I was. Because of other factors, I didn’t believe anyone really wanted my company, and so felt that a minute or two to give hugs and a gift was good enough. I found out later just how far my stupidity went.

We spent the day with my husband’s family, then, when we were getting ready to leave, their phone rang (only landlines back then). It was my Grandma. She wanted to know how much longer we’d be. I had completely forgotten about agreeing to stop in to see her, and so told her we wouldn’t be able to make it this time; maybe next time. Silence.

A little irritated, I asked her in a snappy tone if that was ok. It was then I heard her sniff… She was crying. Very quietly she said it was fine, that she loved us, and then she hung up. A twinge of guilt struck me but I smothered it with more irritation. It was just a drop in, I rationalized, and she had to understand how little time we had, and how much I had to do. And how much trouble it would all be. Sure, I had agreed, but things happen – right? Besides, she had my dad, my aunt, my uncle – why would she want me to stop by?

I found out a good while later that all of her kids had other plans that day, and so she had made a full holiday dinner just for my kids, my husband, and me. Because I had forgotten, because I had dismissed the entire visit as unimportant, because I didn’t make even the tiniest of efforts to drive over to her apartment while in town, I had hurt her deeply, and she spent that holiday completely alone.

My Grandma is gone now, and there isn’t a single holiday that goes by that I don’t remember what I did, and even though she forgave me – that’s just how loving she was – I regret it all over again. Sure, the moment passed and I learned from it (and attempted to make it up to her in every way possible), but I often wonder if I’m the only one who’s ever forgotten, or put off, another person who only wishes to be with someone during the holidays.

Not everyone has someone to be with on the holidays.

Where do all the homeless go for “The Holidays”? Rooms in church basements or soup kitchens? Where do the single elderly with no family left go? Again, rooms in church basements? Restaurants to eat alone (if any are even open)? Senior citizens’ recreational centers? What about just single people in general? People who don’t have time for friends because they’re swamped with school and/or work and just do not have time to cultivate any type of relationship with anyone? What about the children? The ones whose parents have no time for them, or, who have no parents or family?

But I also wonder why most of humanity usually stops thinking of the homeless, the elderly, the kids, the single people, after the holidays. There’s usually a lot of demands and expectations during the holidays, causing more stress, so while depression can be on the rise at that time, don’t believe for a second that it’s at its worst.

Yes, other people can be irritating. But they are also our greatest source of comfort, and an impressive amount of psychological research underscores the importance of human contact. Rejection by others psychologically wounds us more deeply than almost anything else, and research by neuroscientists reveals that ostracism can lead to feeling actual physical pain. Other studies confirm that loneliness isn’t good for anyone’s health. It increases levels of stress hormones in the body and leads to poor sleep, a compromised immune system, and, in the elderly, cognitive decline. (source)

And then there’s this, from the American Psychological Association (APA).

“There is robust evidence that social isolation and loneliness significantly increase risk for premature mortality, and the magnitude of the risk exceeds that of many leading health indicators,” says Dr. Julianne Holt-Lunstad, PhD

What people really want is your time

So I guess maybe I’m hoping that, by writing this, other people will realize that not everyone wants gifts. For holidays or birthdays or any day. Many times, people just want to spend time with other people. Someone to talk with, to listen to, to visit with, to help them, to give them advice, to receive advice, to learn from, to teach, to offer love, or to receive it. Many who are alone have a whole lot to give, just no one interested in receiving it.

Me, personally, well I’m the kind of person who usually enjoys being alone. Not always though. Sometimes I like to come out of my cave and take a look around, wave at someone, go to the store – that kind of thing. So not everyone is as social as everyone else. But no one wants to always be alone, and no one wants to be alone forever. And sure, while I’d love to have an expensive gift, in my opinion, a willing sacrifice of someone’s time is worth more because it means I’m worth their time. 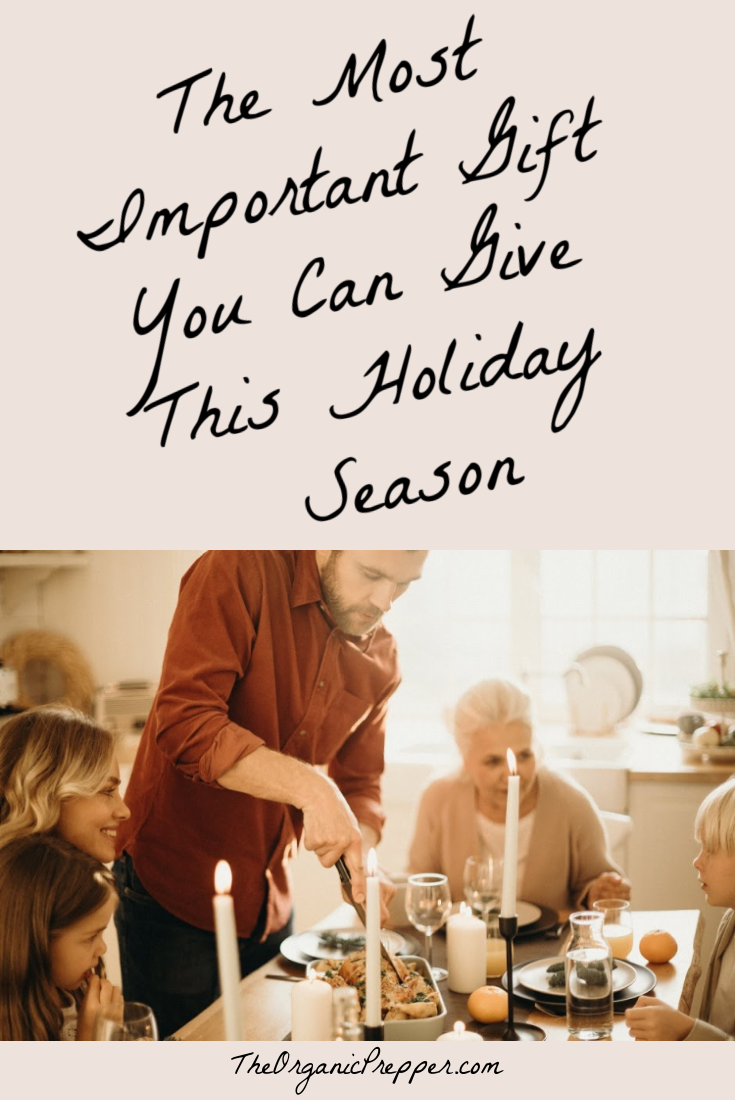