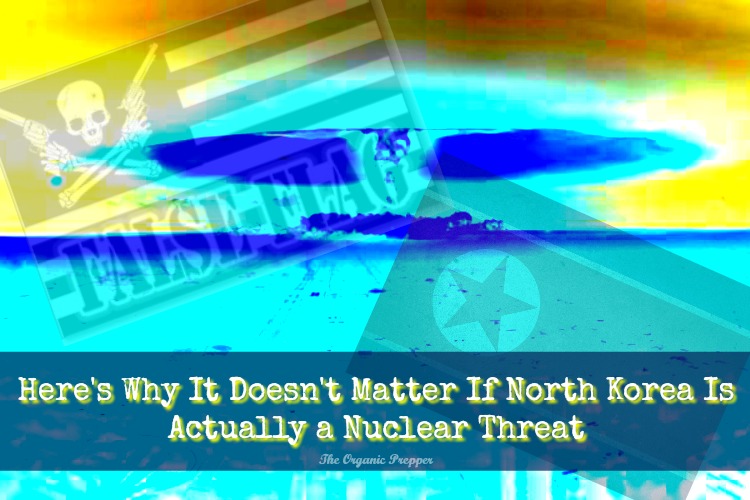 Those who believe that our own government is perfectly willing to commit an atrocity and then blame it on someone else tend to deny threats when they’re brought up consistently by the media. Let’s take the North Korea nuclear menace, for example.

I’ve been writing about the rising threat from North Korea for a long time and each time I publish a piece about their missile capability or some outrageous offense, it never fails that someone pops up and says, “North Korea doesn’t matter. The government is just making them the bad guy so the US can take military action and the people will support it.”

But in truth, that’s the part that doesn’t matter if you are a firm believer in false flags. Here’s the definition of false flags, if you’re unfamiliar with the concept:

The contemporary term false flag describes covert operations that are designed to deceive in such a way that activities appear as though they are being carried out by entities, groups, or nations other than those who actually planned and executed them…

…Proponents of political or religious ideologies will sometimes use false flag tactics. This can be done to discredit or implicate rival groups, create the appearance of enemies when none exist, or create the illusion of organized and directed persecution. This can be used to gain attention and sympathy from outsiders, in particular the media, or to convince others within the group that their beliefs are under attack and in need of protection. (source)

By now, everybody knows that the governments of the world are playing Game of Thrones and even the shocking brutality in that show is nothing compared to the things that we don’t know about happening right now during this “civilized” era.

Will we get nuked?

If North Korea is being painted as the nuclear wild card – and it is – what we really need to consider is not so much, “Will North Korea nuke us?” as “Will we get nuked?”

You have to read between the lines.

With this much hubbub, it seems like it’s building up to something. It is entirely possible that we could see a nuclear attack occur on American soil.

And here’s why I say North Korea doesn’t actually matter:

When you see that bright flash of light followed by a mushroom cloud on the horizon, will knowing the source of that cloud be the thing that saves your life or will knowing the steps to take to protect yourself be the deciding factor of whether you live or die?

In the heat of the moment (no pun intended), it simply doesn’t matter who is responsible.

Of course, later on, the culprits should be called out and dealt with appropriately. I’m not saying that false flag operations for power and political gain are acceptable. They are heinous and cowardly acts.

But that isn’t the point I’m trying to make. The topic of this article is survival, not blame.

In the midst of an event, the source doesn’t matter.

Every time there is a mass shooting and people begin trotting out the “false flag” plotlines, I urge people who wish to be prepared to look at the occurrence and not the source of it. Here’s why.

If you are crouched behind cover, racking the slide of your concealed carry firearm, will you care if the shooter is a black ops guy or a genuine crazy person in the heat of the moment? Nope. You will be focused on surviving, hopefully being able to take out the target before other people are hurt, and protecting your family. It won’t matter whether you’re in the midst of a false flag operation until later, after the lead is no longer flying.

Do you think the people in the tower on September 11th were saying, “I’ll bet the US government is behind this so they can pass some Draconian legislation” or “We have to get the heck out right now because a plane just hit our building and it’s on fire?”  I’m just guessing here since I don’t personally know any survivors, but my money is on the fact that they were figuring out how to survive the imminent threat.

It’s the same thing with a nuclear strike. During the attack, what matters is accepting the fact that it happened, figuring out what to do, and taking action to survive.

You have to heed the warnings.

Pay attention to that part and use it to help you get prepared.

It’s just like any other potentially “fake news.” You can nearly always find a grain of truth at the bottom of it.

News over the past week seems to mean that the sky is the limit with regard to the nuclear capability of North Korea. In the middle of the week, the concern was that Alaska, Hawaii, and parts of Canada were at risk. By Friday, however, a successful ICBM launch occurred that experts claimed proved a missile bearing a nuclear warhead could be launched by North Korea and strike as far into the mainland United States as Chicago.

Yesterday, it was reported that the United States had observed “highly unusual” submarine activity.

This means that coastlines and US naval operations could be at risk.

As well, last night, North Korea undertook a missile launch test from a completely different location, one with a direct line to China. What this tells us is that they may have many different places to launch and that taking out their nuclear headquarters may not be as simple as dropping a bomb on Pyongyang.

According to Park Hwee-rhak, a professor at Seoul’s Kookmin University, the location of the launch “is in mountainous terrain close to the border with China, so it is difficult for the US to hit it with a preemptive strike.” (source)

But that wasn’t the only unsettling news. Jeffrey Lewis wrote for the Daily Beast:

They tested from a surprise location deep inside North Korea, near the Chinese border where it would be hard to strike. And they did it at night when satellites that rely on optical images are useless. (That’s not every satellite, but it is a good number of them.) This looks like a test from an operational missile base. You know that Washington Post report that the missile will “will have advanced from prototype to assembly line” sometime in 2018? Surprise! (source)

According to Lewis, this means that they could have an unknown number of other hidden military bases. That means that taking out Pyongyang wouldn’t get the desired results of shutting down their nuclear program and that attacks could be much more difficult to predict or notice.

This isn’t to say that false flags never occur.

Please don’t take this the wrong way. I am not denying that false flags occur. Some have been so blatant that only the most stubbornly cognitive dissonant people can argue it.

What I’m saying is that the warnings about a nuclear threat are real, regardless of the actual source of that strike. Disregard those warnings at your own peril, because if nukes start dropping you need to know what to do.

Go to this article to learn what you should do in the event of a nuclear strike. If you aren’t at Ground Zero, this is very survivable. And it isn’t going to turn our entire country into some horrific nuclear wasteland where you have to decide whether or not to eat your neighbors. It would be a truly devastating disaster, but it wouldn’t be what you see in the movies.

What are your thoughts about this?

Do you believe North Korea is a real threat or that this is all a Machiavellian, media-assisted plot to start a war? Are you concerned about the potential of a nuclear strike? I want to hear what you have to say in the comments below.