Are You Prepared For a “New Normal” of Flashmobs, Revolutionaries and a Lower Standard of Living? 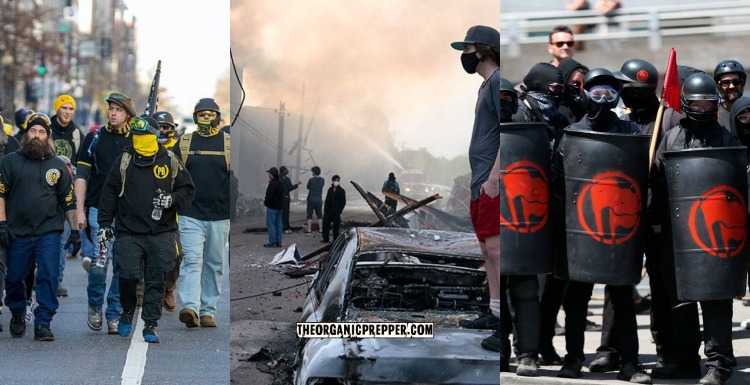 The protests and riots that engulfed the United States just before the election seem to have calmed down. However, you only need to turn on the news to see that random protests and mob street action are popping up all across the country.

Sometimes, the target of the mob attacks is the police. Sometimes they involve competing militias. (Antifa vs. Proud Boys etc.) Sometimes, they are organized mob violence against innocent bystanders.

It seems like the “new normal” everyone keeps talking about is pretty violent.

Portland has become a battleground between Antifa and the Proud Boys

Antifa members routinely parade around Portland’s streets, exercising control over the territory until police disperse them. Of course, they return later. But the Proud Boys have also chosen Portland as a battleground. They routinely caravan through to confront the tolerant left and engage in physical confrontations with Antifa.

Here is how The Center Square described one of these incidents:

A Sunday showdown between anti-fascists and the Proud Boys in Salem turned into a familiar feud between the police and the ski-masked provocateurs who want them abolished.

The protest that kicked off the afternoon began much like others in Salem as a crowd of anti-fascists, and Black Lives Matter activists huddled around the Capitol building.

Several vehicles in the convoy saw their windows smashed by booing protesters who gathered in the street to block their way. One pickup truck driver attempted to drive through the crowd after gunning the motor. No one appeared to be hurt at the scene.

A few hours later, a coalition of local and state police emerged from the Capitol to declare the event an unlawful assembly, pushing protesters from the area with a line of some 50 officers.

This type of thing is becoming more and more prevalent all over the country. A week or so ago, Rochester, New York, saw a mob of Black Lives Matter protesters storm Wegmans, locking nearly 100 customers inside and keeping them hostage for almost an hour.

The Daily Mail reported on the incident, saying:

Black Lives Matter rushed a Rochester supermarket, forcing staff at a supermarket to lock its doors and keep customers locked inside for nearly an hour during a demonstration to mark the one-year anniversary of Daniel Prude’s death.

The staff of Wegmans closed the doors, to prevent the protesters entering, leaving around 100 customers inside on Tuesday.

The protesters blocked the departure of buses from a terminal and then marched up to a branch of the Wegmans supermarket, where staff barricaded shoppers inside.

One of the protesters told Rochester Democrat and Chronicle that Wegmans was symbolic of some of the problems in the city.

Yes, you read that right. Police kill a man. Protesters Become Angry. At Wegmans. Marxism at its finest. (To be clear, this article is not about the death of Daniel Prude or how officers killed him. That is another topic for another article.)

Article published in 2007 predicted all of this

In 2007, The Guardian published an article entitled “Revolution, Flashmobs, and Brain Chips: A Grim Vision Of The Future.” In the article, the authors discussed a Ministry of Defense project that involved painting a picture of the future for “future strategic context.”

Information chips implanted in the brain. Electromagnetic pulse weapons. The middle classes becoming revolutionary, taking on the role of Marx’s proletariat. The population of countries in the Middle East increasing by 132%, while Europe’s drops as fertility falls. “Flashmobs” – groups rapidly mobilized by criminal gangs or terrorists groups.

The 90-page report comments on widely discussed issues such as the growing economic importance of India and China, the militarisation of space, and even what it calls “declining news quality” with the rise of “internet-enabled, citizen-journalists” and pressure to release stories “at the expense of facts”. It includes other, some frightening, some reassuring, potential developments that are not so often discussed.

Concerning the mobs seen on the street currently, the article states:

By 2035, an implantable “information chip” could be wired directly to the brain. A growing pervasiveness of information communications technology will enable states, terrorists or criminals, to mobilise “flashmobs”, challenging security forces to match this potential agility coupled with an ability to concentrate forces quickly in a small area.

The 2007 article added a population increase and reduction in resources and living standards, “will encourage people to seek the sanctuary provided by more rigid belief systems, including religious orthodoxy and doctrinaire political ideologies, such as popularism and Marxism.”

What we see now is the beginning of a new world where “flashmobs,” constant “revolution,” and “counterrevolution” are the order of the day. Meanwhile, the living standards of the average person reduce with each passing day. People are so desperate they’re stealing food. Forming a resistance to the new system forced upon us is paramount.

But, we also must focus on how we can continue to survive on an individual level.

As Selco pointed out, our new normal is survival mode. I highly recommend reading Fabian Ommar’s article “8 Ways To Practice ADVANCED Situational Awareness” for starters. We’re looking at a “new normal,” all right, and it’s about way more than masks and vaccinations.

What are you seeing in your area?

What has changed, if anything, in your area since the Covid response took things to a different level? Are you seeing an uptick in crime, animosity, or poverty? Share your observations in the comments.