Are You Financially Prepared? 8 Common Emergencies and What They Cost 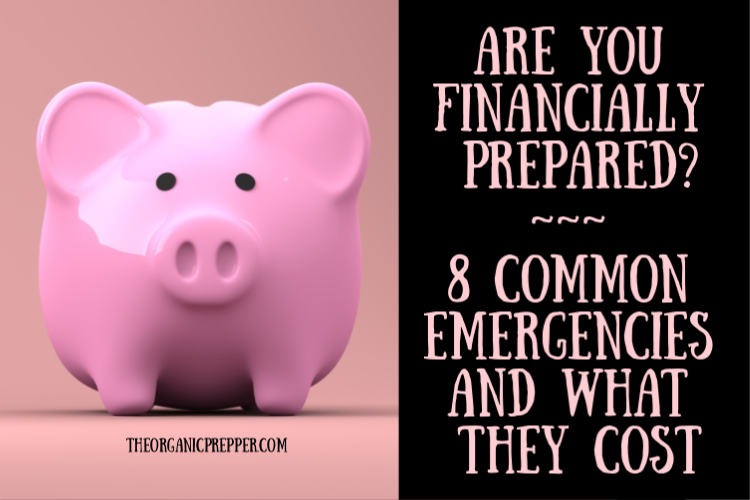 Are you financially prepared for a major emergency?

Most Americans aren’t, according to a new report.

Personal finance site GOBankingRates estimated the costs to recover from eight of the most common disasters, as well as how much you should have saved in an emergency fund to deal with each one.

Here are 8 financial emergencies that really aren’t that uncommon that could cause you financial hardship.

In the economy of the past couple of decades, job loss isn’t that unusual. Sometimes it comes out of the blue, too. Here’s what you should do immediately if you lose your job.

Prior to the end of the shutdown, news outlets reported that dire consequences were inevitable if the government remained closed for much longer:

Unfortunately, most insurance policies for homeowners and renters don’t cover flood damage. On average, the cost of flood damage to homes is $23,635, and the cost to personal property is $3,172.

If you don’t have a separate flood insurance policy, you could be stuck with that bill. According to FEMA, just one inch of water in a home can cost more than $25,000 in damage.

Even if you aren’t in a flood risk area, flood insurance is worth considering, because more than 20 percent of flood claims come from properties that are not in high-risk areas.

To calculate how much a flood could cost you, try the calculator at FloodSmart.gov.

Property damage and loss are not the only expenses associated with flooding. Being away from home for an extended period can be quite costly, especially if you have to stay in a hotel.

Fire and smoke can cause severe damage to a home. The damage-related costs of wildfires or man-made fires to your home depend on a number of variables, including the extent of the damage and possible additional costs such as water damage repair, chemical damage repair, and soot removal. Costs typically range from $3,192 to $26,987, with a national average of $12,635 for a full repair, according to HomeAdvisor.

There are things you can do to prevent or reduce damage to your home if you live in an area that is prone to wildfires (please see 90% of Wildfires Are Caused by People, Not by “Climate Change” – Here’s Why – and How – You Must Prep Your Home for the Inevitable for details).

For more on how to prevent fires in your home, check out this guide from SafeHome.org: Residential Fire Prevention and Safety Guide.

The sudden death of a loved one

Losing a loved one is not only a tragic event, but it can also leave you with unexpected financial hardship. The average cost for cremation with a memorial service is $8,000, and the average cost of a burial with a traditional burial service, including a casket and visitation, is $15,000, according to FuneralWise.

This isn’t to mention any surprise hospital bills that may have come hand in hand with the death.

The costs associated with a hurricane or tornado vary widely depending on how severe the damage is, with costs ranging from $2,255 to $13,178.

According to the GOBankingRate report, having $13,000 saved will cover the high-end average cost of repairs. In many cases the damage is not covered by insurance, particularly if flooding is also involved. Check your insurance policy to see what is covered in the case of a hurricane or tornado.

But keep in mind that costly repairs are not the only expenses these natural disasters can bring.

If you live in an area that is prone to hurricanes or tornadoes, plan for the potential loss of unemployment (temporary or long-term), higher gas prices, extensive repairs to your property, and unfortunately, the possibility of property loss.

The costs of being away from home for an extended period of time also needs to be considered. Will you stay in a hotel until you are able to return home?

It’s best to invest in protecting your home before an earthquake hits, rather than paying to cover costs of the damage afterward.

Retrofitting is done to prevent displacement from a home’s concrete foundation, making the house safer and less likely to suffer damage during an earthquake. The cost to retrofit the average home costs between $3,600 and $6,300, with an average cost just above $4,700, according to HomeAdvisor.

If you live near an active fault zone, it is especially important to consider investing in earthquake preparations. According to a 2018 report from National Geographic, more than half of the continental US could expect a major quake within the next 50 years.

The GOBankingRates report based these figures on out-of-pocket expenses for emergency care, and states that having $1,500 saved will give you some financial cushion, “in case your ER bill ends up being a bit higher than average.”

Medical expenses can exceed $1,500 by a lot – especially for those without health insurance. In fact, medical problems contributed to 66.5% of all bankruptcies, “a figure that is virtually unchanged since before the passage of the Affordable Care Act (ACA)”, according to a study published as an editorial in the American Journal of Public Health on February 6, 2019.

That study revealed some troubling facts:

The findings indicate that 530,000 families suffer bankruptcies each year that are linked to illness or medical bills.

Bankruptcy debtors reported that medical bills contributed to 58.5% of bankruptcies, while illness-related income loss contributed to 44.3%; many debtors cited both of these medical issues.

The current study found no evidence that the ACA reduced the proportion of bankruptcies driven by medical problems: 65.5% of debtors cited a medical contributor to their bankruptcy in the period prior to the ACA’s implementation as compared to 67.5% in the three years after the law came into effect. (source)

Dr. David U. Himmelstein, the lead author of the study, said of the findings:

“Unless you’re Bill Gates, you’re just one serious illness away from bankruptcy. For middle-class Americans, health insurance offers little protection. Most of us have policies with so many loopholes, copayments and deductibles that illness can put you in the poorhouse. And even the best job-based health insurance often vanishes when prolonged illness causes job loss – just when families need it most. Private health insurance is a defective product, akin to an umbrella that melts in the rain.” (source)

The possibility of unexpected medical expenses is just one more reason to start building an emergency fund as soon as possible (if you haven’t already). Here’s how to do that.

The financial costs associated with car accidents vary greatly depending on insurance coverage, the severity of the accident, legal costs, fines, and other factors.

If you are in a minor accident and do not want to get your insurance company involved, be prepared to pay for any damage to your car (or, to the other person’s car if you are at fault).

Costs will vary based on the extent of the damage, but the average body shop bill for minor accidents is the average auto body shop bill after an accident ranging from $500 to $1,500, according to the GOBankingRates report. It’s important to know what your deductible is and whether or not your insurance covers a rental car for the duration of the repair.

Financial emergencies can happen to anyone.

Unexpected financial emergencies can happen to any of us and are not limited to the eight scenarios listed above. See the article 20 Times I’ve Been Glad I Had an Emergency Fund for many more examples of situations that can cause financial trouble. Many Americans are only one missed paycheck away from financial disaster.

If you don’t have a lot of extra money to stash away, remember that every little bit saved adds up. Making small changes in your day-to-day habits can make a big difference.

Two dollars, saved on a daily basis over the course of a year, is $730.

If you do find yourself facing a financial emergency, please see the article What to Do When You Have a Financial Emergency for things you can do to get through it. 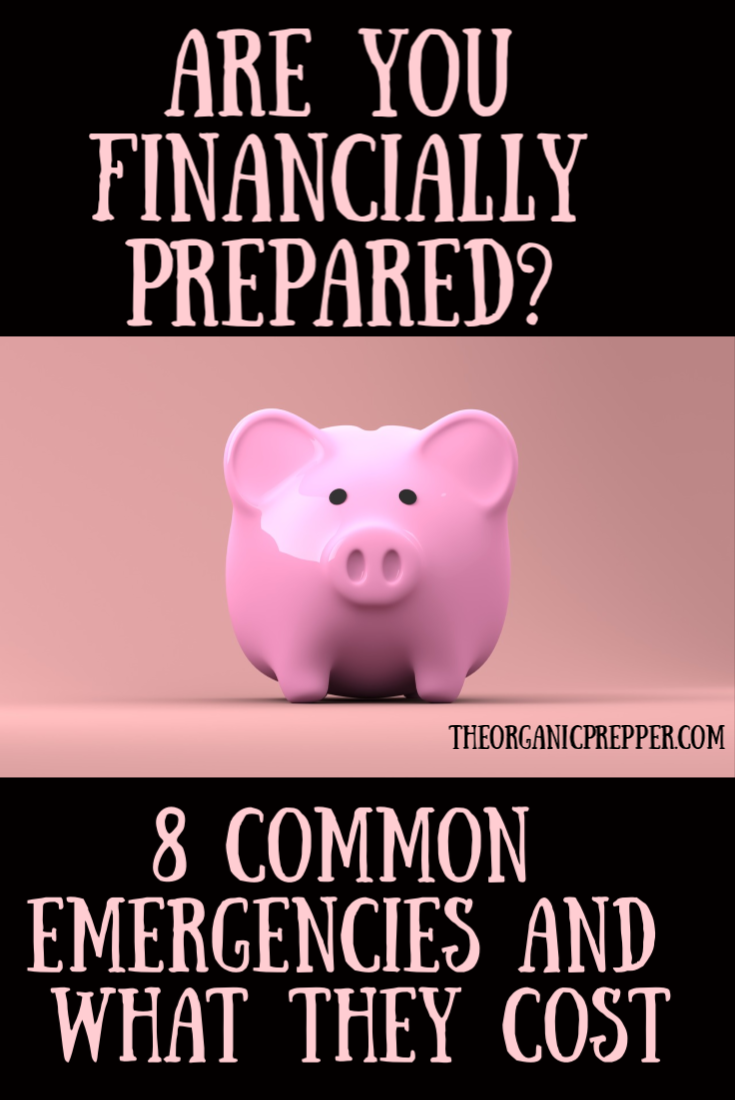