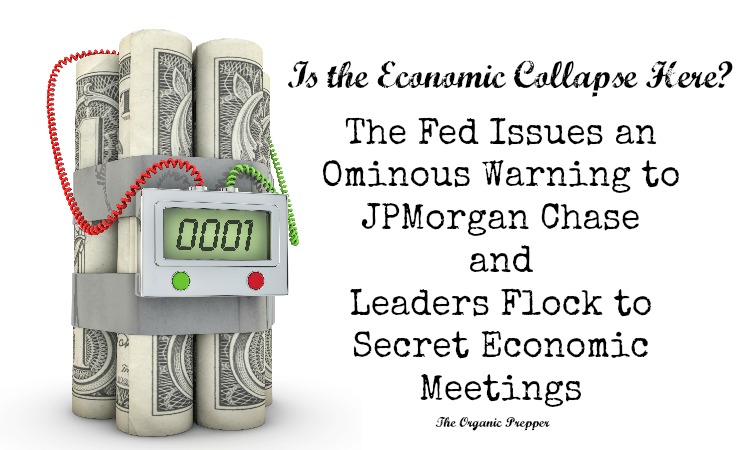 Do you hear that? It’s the clock on the time bomb, and it appears to be ticking relentlessly toward our economic collapse.

It seems like every day, there is a new threat to the financial well-being of the disappearing middle class in America. Of course, less affected are the members of Congress and their buddies on Wall Street. You know, the ones that put the politicians in office to get favorable decisions made on their behalf in Washington.

But if you happen to have been ignoring the folks Obama calls “peddlers of fiction” who have been warning us all of an impending economic crisis along the lines of the last financial collapse, you might want to pay attention now, because a disturbing series of events is in motion.

First of all, the Fed just issued a terrifying warning to the biggest bank in the country.

Finally, the Fed has admitted that we just can’t take another hit without incurring an epic disaster.

And by “admitted” I mean they’ve issued a chilling warning to JP Morgan Chase, the biggest bank in America.

The letter is addressed to Teflon-coated Jamie Dimon, the leader of the bank (who seems to have made a deal with the Devil to become completely immune to prosecution, no matter what he does.)

It is 19 pages and heavily redacted, but here are some excerpts that should send a chill down your spine. The emphasis is mine.

The Agencies also identified a deficiency in the 2015 Plan regarding the criteria for a rational and less-complex legal entity structure. In order to substantially mitigate the risk that JPMC ‘s material financial distress and failure would have systemic effects, JPMC should ensure that its legal entity structure promotes resolvability under the preferred resolution strategy across a range of failure scenarios. Flexibility—or “optionality”—within the resolution strategy helps mitigate risks that, if not overcome, could otherwise undermine successful execution of the strategy and, more broadly, pose serious adverse effects to the financial stability of the United States.

These divestiture options do not appear to provide sufficient optionality under different market conditions.

The divestiture options in the 2015 Plan also were not sufficiently actionable, as the 2015 Plan sections fore did not contain detailed, tailored, and complete separability analyses. For example, only one obstacle to divestiture to the [redacted] key vendor contracts was adequately analyzed; the analysis of the other key obstacles cited regulatory approvals, client communications [redacted]

This is also concerning:

JPMC does not have an appropriate model and process for estimating and maintaining sufficient liquidity at, or readily available to, material entities in resolution (RLAP model). This is notable given J?MC’s liquidity profile in its 2015 Plan, which relies on the firm’s ability to shift substantial amounts of liquidity around the organization during stress, as needed. As explained below, JPMC’s liquidity profile is vulnerable to adverse actions by third parties.

Even without a degree in finance, I know this is bad:

JPMC’s 2015 Plan relied on roughly  of parent liquidity support being injected into various material entities, including its U.S. broker-dealers, during the period immediately preceding JPMC’s bankruptcy filing. This includes reliance on funds in foreign entities that may be subject to defensive ringfencing during a time of financial stress.

Here’s the long and the short of it:

Every year, large banks must create a contingency plan that explains what they’ll do if they begin to go under. The biggest bank in the country has such a lackluster, half-baked plan that the Fed called them out on it for 19 pages and warns that their nonchalance could be responsible for the financial instability of the entire country.

PS: Since this isn’t my first rodeo, I downloaded the entire PDF. It’s funny how things have a way of disappearing off the internet when the mainstream media wants to ignore them.  You can download it yourself too at this link:

JPMorgan Chase is not alone.

But they’re not the only ones.

Three of the five largest U.S. banks (JPMorgan Chase, Bank of America and Wells Fargo) have now had their wind-down plans rejected by the Federal agency insuring bank deposits (FDIC) and the Federal agency (Federal Reserve) that secretly sluiced $13 trillion in rollover loans to the insolvent or teetering banks in the last epic crisis that continues to cripple the country’s economic growth prospects.

Are all three banks going down?

But that isn’t even the scariest part.

In case you think it’s just a normal day at the Fed…It isn’t just these warning letters that should make you pay attention. At the risk of sounding like I’m selling Ginsu knives, there’s more.

The Great Recession Blog posted a bullet list that should blow your mind when taken in conjunction with the news above. (Be sure to read the full article – it goes into a lot more detail.) It seems that there’s enough concern to spark a flurry of secret meetings among those in power.

How does this affect you?

The trouble is, the money you are working overtime to make, the security you feel that you have by saving it…it’s perceived value can be completely wiped out by a financial crisis that occurs on a national level. That’s because if a huge bank like JPMC fails, lots of othe companies fail with it. Then this stuff happens:

The bottom line is, income will remain the same, decrease, or even disappear entirely for many of us.  Meanwhile, the price of darn near everything will go up.  Expect to pay more for things like keeping your utilities on, feeding and clothing your family, keeping a roof over your heads.

Aside from that, those dollars you are carefully saving? They are only providing you with the illusion of security. The economic collapse will hit nearly everyone and they’ll feel like they did something wrong with their finances. It will be hard to see that the flaw is not with their money management, but the management of the country itself.

Here’s what you need to do

Here’s what you need to do immediately in the event of either a market crash or further news of a bank failure. (Of course, if you wait until a bank failure has been announced, you may have waited too long.)

For the long term, focus on information

Hopefully there’s no need to empty out your bank accounts, stock up on last minute supplies, or lock-and-load for home protection. However, if this is an actual 1929/2008-style stock market crash, you need to take your preps to the next level. If you can’t buy your necessities, you’re going to have to produce them, something that is a complete turnaround for most folks.

Information is the key. It’s imperative that you learn everything you can so that you know what you need to add to your preps. As well, it’s essential to acquire the knowledge you need to fend for yourself. Take these two steps, if you haven’t already.

The internet is a wonderful place, and best of all, this knowledge can be found for FREE! The more you know about crisis situations, the more ready you will be to face them. Some sites are friendlier to beginners than others, so if you stumble upon a forum where people seem less than enthusiastic about helping people who are just starting out, don’t let it get you down. Move on and find a site that makes you feel comfortable. Following are some of my favorites, and the link will take you to a good starting point on these sites. In no particular order:

Following are some of my favorites, and the link will take you to a good starting point on these sites. (Actually, it’s wise to begin increasing your knowledge even if we get a reprieve.) In no particular order:

This is where some money could come into play. Most of the time, people in the preparedness world like to have hard copies of important information. This way, if the power goes out and you can’t access the internet or recharge your Kindle, you still have access to vital advice.

Some of these books are for just such an event, while others are guides to building your self-reliance skills.  Commit to picking up a good book each pay period until you have a library to reference during any type of scenario.

Be sure to check out used bookstores, libraries, and garage sales, too. Look for books that teach self-reliant skills like sewing, gardening, animal husbandry, carpentry, repair manuals, scratch cooking, and plant identification. You can often pick these up for pennies, and older books don’t rely on expensive new technology or tools for doing these tasks.

Have they finally kicked the can to the end of the road?

Things aren’t looking good. It makes me wonder if all of the quantitative easing and can-kicking has finally reached the point that they can’t push economic disaster back any further.