Austerity Measures: Who Is Really Paying for the Bailout in Greece? 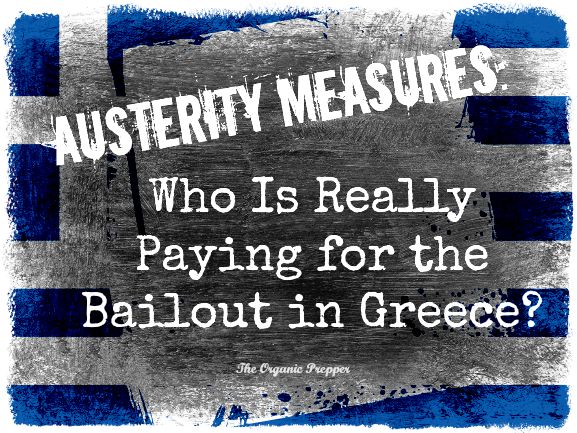 Everyone knows that when you fall on hard times financially, you tighten your budget.  But it’s one thing to go through and examine your own personal spending, making decisions where to cut and where to continue spending, and quite another to have someone personally unaffected by those cuts make the decisions for you.

As the collapse of Greece accelerates, the most vulnerable citizens are paying for the bad decisions of the government.

Despite the wishes of the people of Greece, who voted overwhelmingly against accepting the “help” 10 days ago, the government has caved to the EU and is negotiating the terms of a third “bailout.”  In the agreement, Chancellor Angela Merkel of Germany  has deemed that none of the debt will be forgiven, but the payments could potentially be stretched out over a longer period of time.

Of course, the ins and outs of these billions of dollars don’t really mean that much to the individual people of Greece. And therein lie the lessons for the rest of the world.

While the government is making decisions despite the fierce opposition from the people, it is the everyday folks who will bear the painful brunt of the agreement. Those who are voting for this agreement in the Parliament will not be personally affected like the people struggling to care for their families.

The bailout will increase poverty in Greece

In a recent article on Time.com, Victor Luckerson calculated what similar austerity measures would look like in the United States, should such a plan be enacted here. I’ve used his math in the following list:

Add to these income reductions a painful new sales tax of 23%, up from 13%. Anything a person needs to purchase requires that they pay the government nearly a quarter of the price of that item to be allowed to do so. This isn’t just for luxury items or cigarettes. This sweeping tax includes things like food, firewood, clothing.

Now, imagine being a minimum wage worker in this situation. Your income has significantly dropped by 22%.  Your expenses have increased by 23%.

Imagine being a retired senior citizen under this plan. Your income is down by 40% and your expenses have increased by 23%.

Effectively, your money has been cut in half, and in some cases 63%, all so you can help the government to pay off a debt that you voted against in the first place.

Greek banks are open, but access to money is limited

Banks in Greece have been closed for 3 weeks now.  Although business could be conducted electronically, withdrawals were strictly limited.  The doors have reopened, but that doesn’t mean that people can get their Euros out.

The daily cash withdrawal limit has been kept at 60 Euros per day (about $65 USD), but in a stroke of kindness, Greeks no longer have to go to the ATM each day to get their allowances. They can take it out on a weekly basis instead to the tune of 420 Euros.

Other banking restrictions also exist, according to an article on Zero Hedge. Checks can’t be cashed, only deposited. Customers can’t use their ATM cards or credit cards in other countries to withdraw cash, but they can now make purchases outside of Greece. There are restrictions on opening new bank accounts (although why anyone would possibly want to put their money in a bank is questionable.)

How to prepare for survival in a collapsing economy

Although all eyes are on Greece, there are 24 other countries facing bankruptcy and economic collapse.

Much has been written about the possibility of a similar type of collapse here in America. While some pundits declare that it’s absolutely impossible for such a thing to occur here, it’s indisputable that we, like Greece, are deeply buried in an astronomical amount of debt. We’ve spent more than we’ve earned as a nation. Social programs have drained the coffers with many recipients never putting money back in.

However, this is a debate for a different article. The focus of this one is that eternal question that preppers everywhere focus on:

What would we do if this happened to us?

A smart person observes the situation and figures out, well ahead of an actual event, the way to survive this type of scenario. Looking at the numbers above, the following suggestions could be helpful during such an event.

1.) Be wary of the banking system. As we’re seeing in Greece, possession is ownership. Any assets you might have that are not in your physical possession aren’t really yours. If you have thousands of dollars in the bank, and the bank locks down withdrawals the way they have in Greece, who really has that money? It’s not you.

Get your finances in order now by investing in hard assets like food, precious metals, seeds, and other long-term supplies. Limit the amount of money you keep in deposit accounts. Remember that the FDIC has greatly reduced the insurable amount pre account and banks have positioned themselves for a “bail in”….with depositor’s money, should things go awry.

2.) Prepare for a barter economy.  When governments increase the cost of living dramatically through outrageous sales tax hikes, black market economies spring up out of necessity. With wages already decreased, people simply can’t afford a simultaneous increase in expenses. Start now by learning skills that will be in demand, producing goods that others will need, and by stocking up on items that could become scarce. Do keep in mind that governments greatly frown upon the barter system, since it means that they don’t get their piece of the pie. Since I’d certainly never recommend you break the law, either keep yourself legal or practice extreme discretion.

3.) Have supplies on hand.  When it hits the fan, it may not be a giant, dramatic event, in which you can pinpoint the moment it happened. Instead, it may be a case similar to Greece, where supplies are scarce and the ones available are extremely expensive. (Plus that have that big tax heaped on top.) Since most of the country’s consumer goods are imported, products like aspirin and food are in short supply. In Venezuela, people wait in line for hours to purchase things like laundry soap and toilet paper.  Start right now to get your stockpile in place before such  gradual, but nonetheless disastrous shortages occur.

4.) Don’t expect Social Security to be there when you retire.  If you are under the age of 50, your retirement plan had better not be based on receiving a Social Security check each month. There have already been dramatic cuts in the amount of money disbursed to recipients, and we can most likely expect that to drop further, or even disappear altogether.

Investment and interest-bearing savings accounts, once the wisest courses of action, are also debatable, because of the above-mentioned bail-in plan. Don’t think it can happen? Do you remember how savings accounts in Cyprus were raided a few years ago? What about when the Chinese government banned retirement fund brokers from selling stocks?

The best retirement plan is the absence of debt, a paid-off home with money set aside for property taxes, and a simple lifestyle. Alternatively, you may be working until you die of old age.

5.) Build your self-reliance.  Whether or not things devolve to the point they have in Greece, being able to produce some/much of what you need will soften any economic blow that occurs. If you can produce your own food, you’ll be less affected by the potential of food prices increasing dramatically. If you can get by on a smaller amount of money, future wage slashes will hurt you less. Everything that you can produce yourself is one less thing you’ll have to buy, and when nationwide poverty becomes as intense as it is in Greece, that freedom is invaluable.

6.) Be prepped for any situation.  As a severe economic crisis devolves, the way of life that we take for granted could change dramatically. What would you do if you had to make a choice between having electricity or having running water? Between having shelter or having food? As expenses go up and incomes go down, something, somewhere, will have to give. And most likely, what will give is the lifestyle of the average American.

Many of the same preparedness steps that get us ready for an EMP or other world-changing event can also help prepare us for life after an economic collapse. Building up your supplies, self-reliance, off-grid and renewable options, simplicity, and old-fashioned skills can go a long way towards adapting to a different way of life.

As you watch the situation with Greece unfold, do you feel that it’s something that could occur in the United States?  How have you prepared for such a possibility?

Books recommended in this article:

The Self-Sufficient Life and How to Live It

The Pantry Primer: A Prepper’s Guide to Whole Food on a Half-Price Budget

The Prepper’s Financial Guide: Strategies to Invest, Stockpile and Build Security for Today and the Post-Collapse Marketplace

The Imminent Crisis: Greek Debt and the Collapse of the European Monetary Union