This Guy Didn’t Wait for the Govt. to Restore Power in Puerto Rico. He Bought a Truck & Learned to Do It Himself 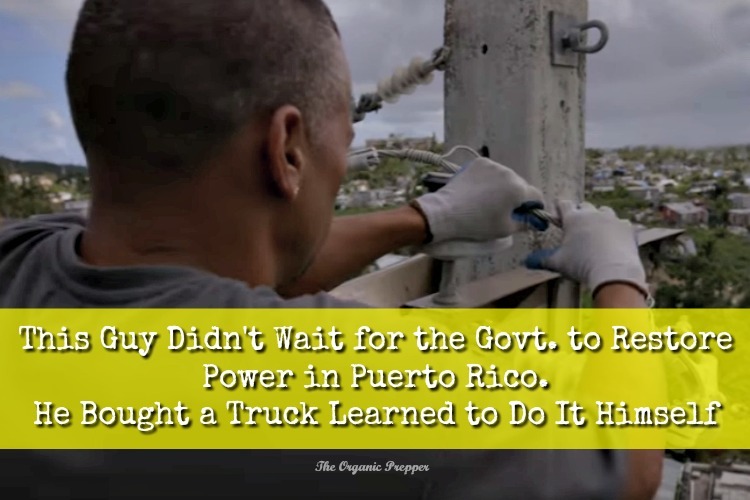 While everyone else was waiting for the government to restore power to Puerto Rico, Oscar Carrion and his friends went in together to buy a bucket truck and taught themselves how to repair wiring.

Thousands of people in Puerto Rico remain in the dark eight months after Hurricane Maria wiped out the island’s already degraded electrical grid. The infrastructure was in such bad condition, some people predicted it could take a year or more to restore the electricity.

Getting aid to the US territory was delayed by red tape, and millions of residents went without food, fresh water, and shelter. The process of restoring the power has been laborious and lengthy. In December, there were still more than a million residents without electricity.

Then along came Oscar Carrion.

The hero of this story isn’t the government. It is a resident of Puerto Rico who got together with his friends and decided that something had to be done. And they took responsibility and did it themselves.

Oscar Carrion, a father of four, got together with a group of friends to purchase a used bucket truck for $2500, which they collected from people in their neighborhood. Then, they taught themselves how to repair the wiring and poles that had been destroyed by Hurricane Maria. Completely self-taught, they risked their lives to restore the power to places in the island that the government hadn’t gotten to.

Watch this short video about the citizens’ teamwork.

The situation is still grim for many Puerto Ricans.

One woman from Puerto Rico shared what it is like there, 8 months after the storm:

We Puerto Ricans are grateful for their help & the help of many like them that from the bottom of their heart gave us a hand on those days & are still helping.

I was prepared but it was the majority that suffers & is still suffering after 8 months. We still have around 1,200 people without light.

I am able to write to you on my phone but I need to go to another town to use the WiFi to check other things. I was taking some classes & lost my money because of not having that service. The first month was no phone, tv, WiFi, banks, most supermarkets were closed or gone & the ones that were open, the lines were so long that you got tired just looking at them. By the time you got inside whatever you were looking for was gone.

The destruction make me cry day & night. We went to visit my mother & took another route as we were going through if you know the place it was like going through another road & then you see houses & business that were there for 100 years destroyed. But like I tell my kids, prepare, you never know what is going to happen.

This young man & his friends have a heart of gold but in here now the criminals are more than the good ones. Sorry if I bother you with my memories & everyday life but is hard to see so many people displace & see grownup men crying when you asked them about the wife or children and find out it is one the dead ones or that they lost their business or home. Take care, be safe & prepare

This isn’t the first time we’ve seen the community pool their resources and be more efficient than the government during the aftermath of a crisis. Remember the rescue operations performed by the Cajun Navy during the Louisiana floods a couple of years back? The local government demanded that they stop surviving without permission immediately, go so far as to block their access to people who needed help.

But, Oscar knows you can’t wait around and expect to be rescued. He and his friends are a shining example of what self-reliance is all about. This is why we prep – because we don’t want to wait for the government to “save” us. Because, as Oscar said, “We have to do it for ourselves. Because if we don’t, nobody will do it for us.”