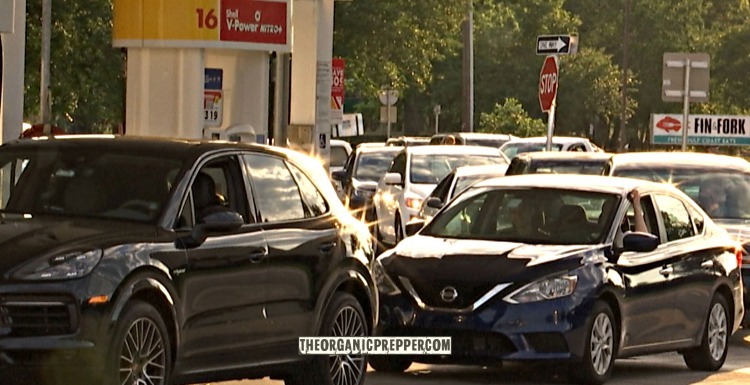 The United States is currently in a state of emergency…again.

This time, it is due to an alleged massive cyberattack leveled against the Colonial Pipeline. The result is the shutdown of virtually the entire Pipeline. Though the event happened days ago, it was not until yesterday that panic began to set in. In a flurry of panic buying, the Southeast United States stands on the precipice of running out of gas.

Maybe having a bicycle as prepper transportation isn’t such a crazy idea after all.

A few days ago, DarkSide, a hacker group that often steals from major corporations and gives a cut to charity, hit the Colonial Pipeline with a major cyberattack. The FBI claims to have been investigating the group since 2020.

CNBC News said this about DarkSide:

The DarkSide hacker gang that is responsible for the devastating Colonial Pipeline attack this weekend is a relatively new group, but cybersecurity analysts already know enough about them to determine just how dangerous they are.

According to Boston-based Cybereason, DarkSide is an organized group of hackers set up along the “ransomware as a service” business model, meaning the DarkSide hackers develop and market ransomware hacking tools, and sell them to other criminals who then carry out attacks. Think of it as the evil twin of a Silicon Valley software start-up.

The FBI has confirmed the use of ransomware to disable the fuel pipeline.

The U.S. government declared a state of emergency late on Sunday. The government lifted limits on the transport of fuels by road to keep the gas supply lines open.

“This Declaration addresses the emergency conditions creating a need for immediate transportation of gasoline, diesel, jet fuel, and other refined petroleum products and provides necessary relief,” the Department of Transportation said.

White House Press Sec Jen Psaki added that “as the Administration works to mitigate potential disruptions to supply as a result of the Colonial Pipeline incident, @USDOT is taking action today to allow flexibility for truckers in 17 states.”

One source located in the Southeast told me that everything was normal when he went to buy gas at lunchtime. However, between his lunch break and the end of the workday, mainstream media spun into overdrive. MSM hyped the cyberattack and the possibility of a fuel shortage.

As a result, panic buying ensued around 5 pm. By 7:30, there were no gas stations in the region with any gas left to sell. By 9 pm, traffic on typically busy highways had fallen silent. Some stations replenished by fuel trucks were entirely out of gas again only three hours later.

But don’t worry. The research shows that in real emergencies, nobody loots, nobody panics, and nobody goes without.

Take a look at what Zero Hedge wrote in regards to gas prices:

Just in case the U.S. didn’t already have a “transitory hyperinflation” problem, gasoline futures soared more than 4% – and are likely to jump much more – late on Sunday after the Colonial Pipeline announced that while some smaller lateral lines between terminals and delivery points are now operational, its mainlines (Lines 1, 2, 3 and 4) remain offline since late Friday after the company suffered a crippling cyberattack that affected its key I.T. systems.

While many people have concerns about the economic impacts of higher gas prices or the ability to find gas to travel for work and errands, a gas shortage has much more significant implications.

With gas shortages come food shortages, and that’s not all

Primarily transported by truck, food shortages are likely to increase. Emergency services are likely to suffer, and travel for any reason will become much more cumbersome. All of this depends on how long gas is restricted. What will happen if fuel restrictions last longer than a week? What if it’s two weeks? Three? A month? Several months? America seems to be racing itself back to 1840, and it’s winning.

“This shutdown will have implications on both gasoline supply and prices, but the impact will vary regionally. Areas including Mississippi, Tennessee, and the east coast from Georgia into Delaware are most likely to experience limited fuel availability and price increases as early as this week,” said Jeanette McGee, AAA spokesperson. “These states may see prices increase three to seven cents this week.”

The very “convenient” timing of the event does have a number of people questioning just how genuine the cyberattack might have been, with Wall Street set to gain massively on an “unforeseen” event that resulted in higher prices and higher demand, just before the summer driving season begins with American stricken with cabin fever after a year of house arrest are being allowed some masked freedom.

Zero Hedge writes: “So far, nationwide gas prices have surged six cents this week to $2.96 – the highest for this time of year since 2014. If the national average soars to $2.99 or higher this week, it will be the highest since November 2014… and right before the start of summer driving season.

Also, “In response to the news, gasoline futures jumped 4% to $2.21 a gallon, approaching the highest since 2014. WTI and Brent both spiked more than 1%, while other products such as diesel and jet fuel are also likely to jump.”

Interesting. Someone won’t be losing their shirt.

What is the fuel situation where you live?

What is the price of gas where you live? Is there plenty or are there gas stations that are running out? Let’s keep each other in the loop and pool our knowledge. Share your general area with your comment.