Covid-19 in Venezuela: The Perfect Excuse to Crack Down Even More 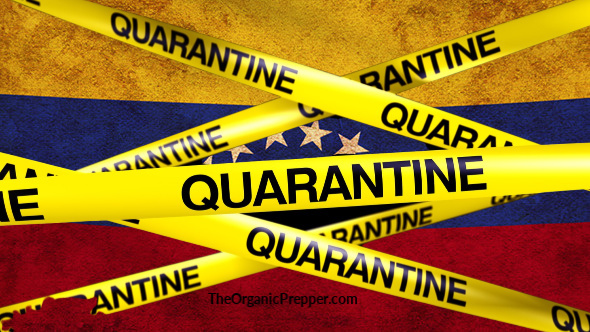 After the 2008 recession, I always thought that, given the incredibly complex state of the modern economy, only a very powerful event on a global scale would affect enough to make us bug out seriously. I always use to read a lot and didn’t have to spend much time before finding a payload of information and well-put-together articles about the possibility of man-made/natural disasters in the near future. Being a victim already of a disaster, once the tide arrived at something seemingly normal, I discovered that the next possible threat was a pandemic.

I arrived at the conclusion a pandemic was the most possible threat. However, I made the mistake to not register it or publish it. Just a couple of informal chit chat here and there. Some people agreed with me. Most of them just laugh thinking I was crazy. Once I performed more thorough research, I realized a swine or bird flu was the most likely. I wasn´t that wrong.

And now the infamous tyranny subjugating my country has taken control of everything, everywhere, impeding the most basic liberties to “control the pandemics”.

How Venezuela is trying to control the spread of Covid-19

The cases of Covid-19 are in cities with much greater mobility or closer to the borders with other countries, like Merida or San Cristobal. There are about 70 cases in the entire country.

I wrote before about what a nightmare a pandemic would be with our weak medical system and malnourished people.

It turns out that the spread didn’t even have to be bad to make matters worse for Venezuelans.

Well, here I bring for you an update about what I´ve received today. In the State I used to live, a series of measures have been issued to “contain” a virus…that still hasn’t been detected in even one positive case in this state.

This is, dear fellows, in a single state. Its effect is intended to control one city. At the time of this publishing, it is very likely other similar regional decrees have appeared.

The restriction of fuel for civilians

The main issue I am noticing here is the evidence of footage showing uniformed personnel informing the public there will be no more gasoline for civilian use.

This is a very strong indication for the future. If you consider it is worth the effort to stock it, great. It´s costly, dangerous, and it´s not exactly essential.

There are some other alternative means. It´s all about using your brain and your knowledge to overcome the obstacles. If such obstacles are mainly technical, so much better. I used to win my bread with that and my grey matter jelly mass is wired for that. Diesel NEVER was scarce, just for the record. I monitored this very close, and insisted to my friends about this, trying to prevent them before the gasoline supply dried out. Now it´s dry. No people transiting from one place to another.

They can´t control entirely without this excuse of a quarantine.

In states without even one case, quarantines are being imposed, too. That´s incredibly harmful for everyone; those food producers in their respective localities are not going to deliver their clients. Unless you can manufacture your own alcohol and makeshift a carburetor to run on that stuff…you´re now a slave of the ruling mafia.

It´s only a matter of a few days before the guy in the chair (won´t call his name) decrees “the supply of basic products will be done by the National Army…”…and this will took to the ruin to the already scarce producers to feed and pacify the dormant beast in the barrios of the city, which easily could sweep them off the Earth once it decides to do so.

The scenario is going to be, as far as I can predict, much like Ukraine in the 20s. Crop confiscation at gunpoint, with the warlords of every military zone charging whatever they want to the people, via an underground supply network.

This is what happens in Cuba, just like that. That´s how they have survived for decades. With that population descending of a long line of slaves, this is was to be expected. The late Castro himself came from a family who used to own slaves, and sure he knew how to enslave people.

The empty streets of my former city, according to some informants still living there, are much scarier now. Not even the thugs in those Chinese bikes plaguing the streets, robbing at gunpoint. This is going to be a mess. They will head for the closest places to steal and get their fix money, and people are going to defend with all they´ve got.

Covid-19 gave the government the ability to crush every last remaining freedom.

I don´t want even to think about what will happen if the barrios start to loot, looking for food. If you believe things can´t get worse, I have bad news for you.

It´s very likely they can.

This disease gave to the totalitarian regimes absolute freedom to act as they please. With the excuse of being “working for the greater good”, they are stomping completely in the few freedoms left people had.

I don´t want this article to become a rant nor a political article.

I´m just, as usual, exposing the facts that generate the consequences against us, as preppers. There is no banking system. The national currency is worthless. Jee, they closed even the BANKS! Therefore, I would be amazed if this doesn’t explode in two weeks. Word.

Reports I see, rows (again) of people trying to buy in the markets like the Major Market of Coche, in Caracas. Masks are mandatory to allow people access.

I watched a movie these last few days (quite bad actually) and surprisingly, the virus was supposedly another strain of the same coronavirus. In that movie the infection came to the USA in an airplane with one passenger dying in the flight. After the activation of the needed protocol, one of the passengers went rogue and found his way out of the containment procedure.

Well, a friend of mine, from a place in the Nueva Esparta State (Isla Margarita) told me that one of the passengers of an Iberia flight was a Chinese guy. This guy escaped the airport without being tested. He hid in a location 500 meters away my friend´s home. It was the neighbors who reported him, after 15 days.

In that lapse, it´s unknown how many other people he could have contaminated. Local police went to look for the guy and took him to medical custody. This behavior is for me another confirmation of my hypothesis, explained in this article.

This is the part of the story that a communist totalitarian regime won´t ever tell. But we, the citizens, are obliged to spread the truth. The source of this is highly reliable. A personal friend from years ago. We´ve had lunch together, and so on.

The timing of this pandemic is highly suspicious if you ask me. I´m not going to get into any details but why did this arise in times of political tension in Hong Kong? Why are the propagation traits so…unique? Why in the city? of Wuhan How many years were between the last threats? Why if the other pandemics were as well coronavirus the spreading was not so extensive?

And the most important…if bird flu, SARS and MERS, ALL of them originated in Asia…why so much insistency on blaming other countries? Is there even any economic gain as an aftermath of all this, even in the remote possibility of this being an attack? Hardly. That´s what I think. The entire world is facing the consequences. It´s the equivalent of a dirty bomb.

There are more questions than answers at this point.

I miss badly my cottage, my country, and my family, and my psyche is having a workout. This virus is a huge obstacle now that has sowed uncertainty in our future. And I mean ALL of us, from the North, Center, and South. We have common goals and equally common opposition bodies.  Let´s get united, and let´s face them.

Thanks for your reading fellows.